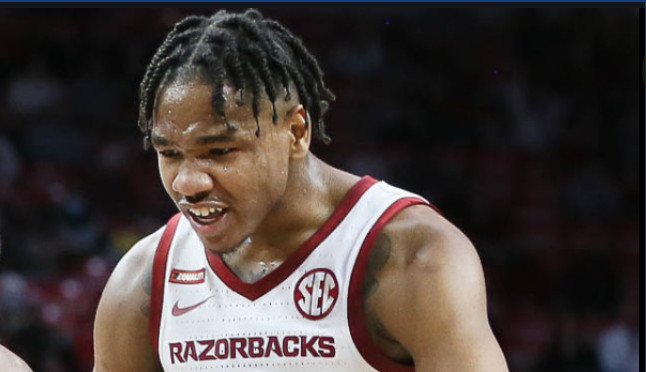 The Arkansas basketball team is in the midst of a six-game winning streak after beating West Virginia on Saturday, January 29th, during the SEC/Big 12 Challenge. The Hogs limited former Razorback, Gabe Osabuohien, to only seven points in 13 minutes before the senior forward fouled out during his return to Bud Walton Arena. The 77-68 victory moved the Hogs’ record up to 16-5 including 5-3 in conference play, keeping them tied with Tennessee for 3rd in the SEC – though Arkansas holds the better overall record.

Up next on the schedule is a road game against the Georgia Bulldogs. At 6-15 (1-7) on the season, the Bulldogs are sitting dead last in the SEC. However, just a few weeks after their football team defeated the Alabama Crimson Tide in the CFP National Championship Game, the Georgia basketball team followed suit and pulled off a major upset on January 25th over Alabama on the hardwood, giving them their only SEC win so far this season.

This was also the Bulldogs’ only win in their last 10 games. Prior to that game, Georgia had lost to four teams outside the Top 100 in the NET Rankings earlier in their season: ETSU (168th), Gardner-Webb (158th), Georgia Tech (151st), and Wofford (102nd). Of course, Arkansas basketball Eric Musselman would never admit to resting some of his key players or looking at the schedule ahead, but if he were ever forced to do so, this might be the game to choose.

What to Expect When Georgia Has the Ball

Georgia is led offensively by sophomore guard, Kario Oquendo. The 6-4 scorer is averaging 12.7 PPG to go along with roughly four rebounds and one steal per game. Despite averaging 3.5 three-point attempts per game, he’s only shooting 21.7% from distance on the season. It’s worth noting that Oquendo left Georgia’s last outing against Vanderbilt on January 29th with an apparent head injury. He missed the final 14 minutes of action against the Commodores.

The Bulldogs’ best long-range marksman is 6-6 senior Noah Baumann. He started only three of the Bulldogs’ first eight games and shot 33% from behind the arc during that stretch. Since then, however, he’s started each of their last 12 games and bumped his 3-point average up to 45% on nearly seven attempts per game during that span. He attempts 6.6 shots per game and 5.2 of them are from beyond the 3-point arc, virtually making him a non-threat from 2-point range.

Jailyn Ingram, a 6-7 senior, was the Bulldogs’ best rebounder before suffering a season-ending ACL injury earlier this season. Now, Georgia is led in this department by 6-10 senior, Braelen Bridges at 5.9 rebounds per game. The starting center is also second on the team in scoring with 12.6 points per game while shooting 63% from the field. His matchup against break-out Razorback forward Jaylin Williams will be one to watch on both ends of the court.

As a team, Georgia is 1st in the SEC in FT%, shooting nearly 75% from the charity stripe. Arkansas is 1st in the country in free throws attempted and made, but they rank 2nd in the SEC in free-throw percentage at 74.6%. Georgia is also 3rd in the conference in free throws attempted, so Arkansas’ ability to defend without fouling will be a major key in this contest. Arkansas is currently committing the 6th most fouls per game in SEC play, an issue that can quickly be amplified by Arkansas basketball head coach Eric Musselman’s tendency to only play seven or eight players on any given night.

Jaylin Williams continued to build on his breakout season during Arkansas’ win over West Virginia. The 6-10 sophomore pulled down a career-high 15 rebounds to go along with 12 points, 2 blocks, 2 steals, and 1 assist in 36 minutes of action.

During his last six games, Williams is averaging 14.5 points, 11 rebounds, 2.7 steals, 2.2 assists, and 1.5 blocks per game while shooting 45% from the field, 39% from long-range, and 86% from the free-throw line. Due in large part to Ingram’s injury and an overall lack of size in their frontcourt, Georgia ranks outside the top 340 in the country in opponent 2-point percentage. This leaves the door wide open for the Razorback big man to have another stellar performance.

JD Notae, however, has been the Arkansas basketball offensive leader on the court all season. Despite extending his double-digit scoring streak to 21 games (dating back to last season) against West Virginia, he spent most of the first half on the bench with foul trouble. Fortunately for Arkansas, Chris Lykes filled in nicely for the Hogs, hitting all four of his free-throw attempts and scoring six points in eight minutes of action.

Though the game against the Mountaineers turned out fine, Notae’s offensive presence will be necessary to win several games down the stretch. Arkansas vs Georgia might look like a mismatch on paper, but Notae’s growing leadership and experience will help prevent the Hogs from falling into a “trap game” against a weaker opponent.

The transfer senior will have extra motivation on Wednesday night as well. Notae, a Georgia native, said in Monday’s press conference he will likely have plenty of friends and family in attendance and childhood friends in attendance to watch him in action.

The 6-1 guard went to high school in Covington, GA, roughly an hour from the Bulldogs’ hometown of Athens, yet he was never offered a scholarship. In the next couple years Notae proved himself more by starring at Jacksonville but apparently Georgia still dismissed Notae as a talent worthy of pursuing. He said the Bulldogs didn’t seek him when he entered the transfer portal after two years at Jacksonville. The last time Notae faced a Georgia-based team that didn’t offer him a scholarship, he scored 30 points against the Mercer Bears in the Razorbacks’ season opener.

“I always want to go back and play against any team in my home state,” the 21-year-old said on Monday. “Going back to play in front of my family is always exciting.” He added he will “for sure” aim to make Georgia recognize what they missed out on.

Arkansas vs Georgia: What to Watch For

But the Hogs put together enough defensive pressure and efficient scoring to defeat the Rebels as they shot 48% from the field and 44% from 3-point range – their second-highest mark of the season behind their 48% performance against Gardner-Webb back in November. Their ability to shoot efficiently or draw more fouls than Georgia typically commits will be a telling factor in the Razorbacks’ success.

Georgia is currently ranked 213th in the NET Rankings, making this game a Quad 3 opportunity for Arkansas on the road. The Hogs are currently 4-2 against Quad 3 opponents, their losses coming to Hofstra and Vanderbilt before they turned the corner and began the current winning streak. ESPN’s Basketball Power Index gives Arkansas an 80% chance to defeat the Bulldogs on the road.

With the prominent injury to their frontcourt star, Jailyn Ingram, Georgia will not be able to generate enough offense against the Hogs’ lineup loaded with defensive-minded forwards like Trey Wade and Au’Diese Toney. Jaylin Williams and JD Notae will once again lead the charge offensively as the Hogs lead the game from start to finish on the road. For just the 3rd time under head coach Eric Musselman, the Hogs will blow out an SEC foe on the road by 18 or more points.

How to Watch Arkansas vs Georgia