Search
Home Arkansas Football Perspective What Could Have Been with Myles Rowser, the Star Arkansas Commit who... 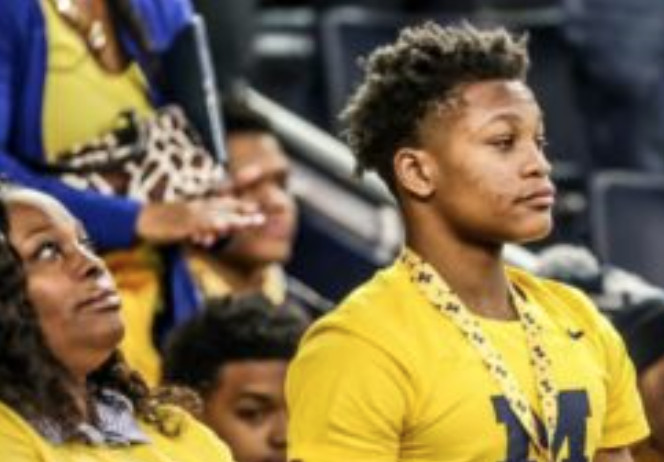 For months heading into National Signing Day on Wednesday, the Arkansas football staff hoped to put bow on what had been the 18th-ranked class in the 2022 cycle with long-time commit Myles Rowser. He was the lone commit out of 21 commits who did not sign on early signing day in December.

Rowser, a four-star safety out of Belleville (Mich.), chose Arkansas in March of 2021 following a five-month commitment to the flagship program of his home state: the University of Michigan. Myles Rowser jumped on board as the eighth Arkansas football commit in the ‘22 group, and later mentioned to me his relationship with Sam M’Bake (who signed with the Razorbacks in December) and the impact he had on recruiting the Kennesaw (Ga.) wideout.

Despite seemingly being a done-deal for the Hogs for months, Rowser today signed with Campbell University in North Carolina instead. That’s an FCS school, folks, in the same division as UCA. For a guy who had more than 27 FBS offers, including from the likes of Alabama, Florida, Michigan, Notre Dame, Penn State, Virginia Tech and Cincinnati.

Rowser was one of the most highly-coveted prospects in the class according to recruiting services, with Rivals rating him as a 5.9-four-star and the No. 150 overall prospect in the Rivals250 (No. 9 safety) – four spots ahead of the leading Arkansas signee as a receiver, Isaiah Sategna (No. 154).

It’s clear that some kind of off-field issues caused him to veer away from signing with the Razorbacks, or any other high-major program for that matter. Still, for the sake of what ifs, let’s look at how he would have fit in with the Arkansas football program.

What Myles Rowser Delivers as a Player

Though Rowser suffered an injury that sidelined him the majority of his senior season, it’s easy to tell from his junior highlight reel why he was so highly rated.

His willingness to lower the boom on those downfield tackles paired with his ability to remain patient in pass-defense situations is a highly valuable skill set in the defensive backfield. A number of plays within the reel include him going low on ballcarriers and negating any opportunity at racking up yards after contact, something that translates well to the next level.

Going low on elite opposing athletes can result in becoming the unwitting accomplice to a hurdling highlight clip that goes viral. Fortunately, Rowser also shows an awareness of when to go higher and drag the ballcarrier down rather than cutting them.

In the passing game, Rowser has an innate ability to jump passes, yet also poses a threat of covering two men at once on levels concepts – routes that stack receivers at different depths to provide a number of options, forcing quarterbacks into ill-advised attempts. On the rare occasion that Rowser finds himself out of position, his athletic ability and willingness to play through the whistle make up for it, leading to a number of late pass break-ups.

How Myles Rowser Would Have Fit with the Razorbacks

At Belleville High, Rowser found himself lined up all over the field. From sticking in coverage in the slot to roaming deep as the field safety or locking down the boundary, his skill set made him a proverbial Swiss-Army knife on the defensive side of the ball.

His athleticism was on full display on both sides of the ball, so someone with the straight-line speed, physicality and ability to change direction makes him a massive asset for whoever is able to land him. Should that that have been Arkansas, here’s where he may fit into the current mix of talent at the position:

With the emergence of Myles Slusher, addition of Georgia transfer Latavious Brini and massive return of potential first-round draft pick Jalen Catalon, it would have been tough for Rowser to crack the initial rotation in year one – especially when arriving in the summer as opposed to early enrolling.

Even after falling a full spring of practices behind, Rowser certainly would have had the talent and potential to be a major player for the Hogs. There’s no doubt in my mind that Rowser could shake up the two-deep by the end of the 2022 season based on talent alone and find his way into some early playing time.

With three safety spots essentially locked up with Slusher, Brini and Catalon, it’s safe to assume that returners with some game experience like Jayden Johnson, Simeon Blair and Malik Chavis would have a hand up over the younger talent like Rowser or early-enrollee Anthony Brown out of Milan (Tenn.).

Although the Razorbacks missed out on Rowser this cycle, he could always thrive at Campbell and look to transfer to a big-time program in the future. Perhaps, Arkansas and Myles Rowser will cross paths again some day.

The below look at Rowser’s turning away from Arkansas published on February 1, 2022:

Defensive backs coach Sam Carter’s departure to Ole Miss is arguably the easiest out for the 6-foot, 185-pound Michigan product. With Carter emerging as the lead recruiter and the two forming a bond throughout the cycle, Rowser may be having some second thoughts.

While this may be enough to serve as a motive behind Rowser’s rumored flip, some other signs suggest there may be more to the case. One such clue may reside on Twitter. Rowser, who has been largely pro-Arkansas on his profile since committing, deleted/deactivated his account just 48 hours before Signing Day.

With many Razorback fans questioning why they appeared to have been blocked by Rowser, it was eventually discovered that “gho$t.” stuck true to his handle and left the site behind.

Now, this clearly isn’t a true indication of whether or not we’ll be seeing a signing on Wednesday – heck I’ve deleted Twitter plenty of times for one reason or another – but the timing behind a clean distancing from the Internet does beg the question of whether something is going on behind the scenes.

Lastly, and probably the most damning piece of fodder, is the lack of a scheduled media availability period scheduled for Sam Pittman.

Following the opening of the early signing period Dec. 15, we saw the Head Hog go before the media and speak about the signees. If the team was expecting one final “BOOM” to round out a strong ‘22 class then there’d likely be some opening for the press to fire off a couple of questions about the newest Razorbacks. (It’s worth noting that 2021 was also void of a media availability session, but Arkansas also signed all 22 of its high school commitments on the first day of the early signing period.)

None of these potential signs, and others, certify the rumors that either Rowser won’t sign anywhere, or he has decided to continue his football career elsewhere. (In the latter case, Michigan still feels like the most likely destination, although Jim Harbaugh’s reported departure to the Minnesota Vikings may affect that.) Regardless, signs currently point toward Arkansas missing out on a Rivals250-caliber player at a position of need in the coming years.