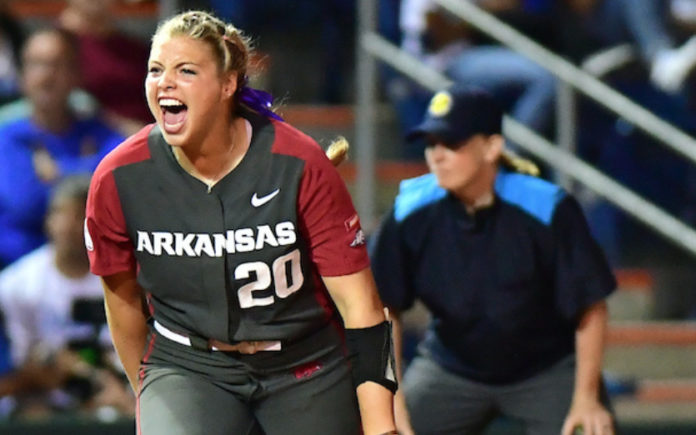 Heading into this week, the pressure on the Arkansas softball team to win this weekend’s Super Regional series vs Texas was heavy enough. All that was on the line was the program’s first visit to the College World Series, a chance to atone for getting swept at home by Arizona last year in the same round and at long last a chance to beat Texas after six unsuccessful tries in previous seasons.

A good chunk of Hogs fans over the age of 60 would argue Texas is Arkansas’ biggest rival, anyway, despite the teams not playing in the same conference in 30 years and three other games holding trophy implications. Generally, football gets the lion’s share of the focus when rivalries are discussed. Basketball next, and, in the SEC, baseball is a third.

But Arkansas baseball appears to have entered a freefall after losing four games in a row, including three to Alabama and this morning to Florida. The Hogs finished 0-2 in the SEC tournament, including Wednesday’s loss to No. 11 seed Alabama. It’s been a severely disappointing last few weeks for the men, who haven’t won more than two games in a row since mid April.

Arkansas Softball Steps to the Fore

And now, as the baseball team gathers to figure out how to get things back on track next week in the NCAA Tournament, the state’s limelight falls on an Arkansas softball team that has won 18 of its last 19 games and looks more and more like a juggernaut with every passing week. The latest evidence came on Thursday night, when it went did its best impersonation of a python to squeeze the life out of No. 18 Texas 7-1.

In it, pitcher Chenise Delce (19-2) displayed why she was tabbed SEC Pitcher of the Year, tossing a six-hit gem with six strikeouts and restraining the Longhorns to six scoreless frames.

Arkansas catcher Taylor Ellsworth knows, clearly, what’s at stake for her team. She also knows what to expect against the Longhorns. She spent her entire undergraduate career in Austin, starting 162 games for the burnt orange-and-white over four seasons. She transferred, as a graduate player, to Arkansas for her final year of softball. In Fayetteville, she started 56 games and knocked in 53 RBI, good for third on the team and almost doubling her previous career high of 31.

“A change of environment, that’s what I need,” Ellsworth said. “When I went in the portal, coach (Courtney) Deifel was the first person to call me. I knew in the first 15 minutes of being here, this was where I was going to come.”

Arkansas needs only win tonight (game at 5:30 CT on ESPN2) to punch its ticket to the CWS. Arkansas softball coach Courtney Deifel has made her Razorbacks into a clear-cut powerhouse that should have no problem with picking up any slack from the baseball team’s (hopefully) temporary struggles. Arkansas has been to the NCAA Tournament the last four seasons (not counting 2020 when the postseason was canceled because of COVID-19).

The Hogs hosted the Super Regional last year, too, but were surprisingly swept by Arizona. So clinching a spot in Oklahoma City – where the NCAA Women’s College World Series is played – has proved to be elusive. The Sooners, the No. 1 team in the country this season and the current standard bearer in the game, won their fifth national title, four of which have come since 2013. This year, however, Arkansas rolled through its Fayetteville Regional, smacking Princeton and Oregon twice to clinch a perfect weekend record.

Oklahoma and Arkansas are the two hottest teams in a nation and appear to be on a collision course in Oklahoma City.

Texas’ route to the Super Regionals was a bit more circuitous. The Longhorns finished third in the Big 12 and fell in the conference semifinals to Oklahoma State, which then upset the Sooners in the conference championship. The loss sent Texas way out west as the No. 2 seed in the Seattle Regional. The Horns beat Weber State, then beat No. 13-seed Washington. The Huskies forced a winner-take-all game in the finals, but Texas, used to playing big-time programs through the Big 12, slipped past with a 3-2 win.

It’s all led here, to Bogle Park in Fayetteville. With the brakes pumped quite a bit on the Diamond Hogs baseball, more eyeballs are now on Razorbacks softball than ever before. The series is, by far, the most important event ever played at Bogle Park.

A few years from now, the exact number of which is uncertain, Arkansas and Texas will play together in the SEC. The rivalry will almost certainly grow more tenacious across all sports. Heading into the 2021 Arkansas-Texas football game, fans embraced the tradition of “Texas Hate Week” and some are doing it again heading into this series.

For now, the rare times these programs meet provides more than enough juice to keep the animus flowing. The additional “oomph” that the rivalry brings pretty much guarantees that the Arkansas softball team will get the attention it deserves, and perhaps – finally – a level of support on par to what the baseball team so often gets to experience.

In the big picture, sure, football will continue to get the bulk of the attention. Basketball and baseball will follow. But as Deifel and Co. continue to turn the softball program into an elite one, expect this particular form of Horns-vs-Hogs to feel awfully familiar, too. What made Arkansas vs Texas in the 1960s-80s so heated was that its games often had national title implications. It took long enough, but we’re finally back to that point again.