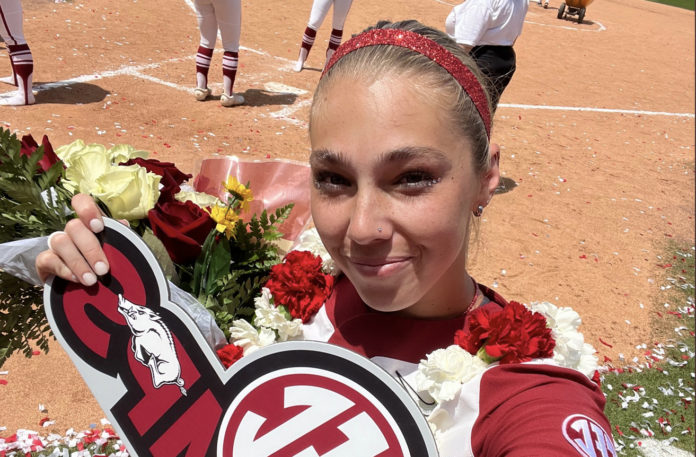 In 2016, the first year Courtney Deifel took over the Arkansas softball program, the Razorbacks were in shambles. They won a single conference game, which is exactly how many they had won the year before under coach Mike Larabee, who resigned hours after the team’s final game of the season. Arkansas softball was a disaster zone.

They had never been qualified as a ‘good’ team, not consistently, anyway. The 2014 season was the first year the program was ever ranked in the Top 25. The Razorbacks had made the NCAA Tournament a couple times under coach Jamie Pinkerton in 2008 and 2009, but even then those Razorbacks were 8-20 and 10-16 in SEC play. Larabee took the team to two NCAAs, too, but things went sour in a hurry. The hope was Deifel, in only her mid-30s when hired, could at least bring some stability and semi-regular top-half finishes in the SEC.

This past weekend, Arkansas won the SEC regular-season title for the second straight season when the Hogs beat South Carolina, 8-0, in five innings. The feat was accomplished while there’s still a full weekend of softball left in SEC play, too. The Razorbacks are 39-8 and 17-4 in the conference and will enter the final weekend of the regular season in the top 5 of all major polls. A Regional will most assuredly be held at Bogle Park and, should the Razorbacks get through it, a Super will be, as well. It’d be Arkansas’ second straight.

In other words, a little better than the two straight one-win seasons the program managed just six and seven years ago.

Normally, you’d be forgiven if you were unaware that Arkansas’ softball was having a good year. But this isn’t new. Deifel, now in her seventh season at the helm, has led the Razorbacks to five straight NCAA Tournaments (yes, we are counting this year already). That doesn’t include the 2020 season in which the postseason was canceled because of COVID. Arkansas was bound to go then. On top of that, the 10 best-attended games in Arkansas softball history have come under her watch.

Deifel’s last two teams represent nearly the best of the best when it comes to Razorback sports. In the last two seasons, the men’s basketball team has achieved the most postseason success among the athletic program’s team sports, but this softball team is ahead of everybody else when it comes to regular season success by winning 81.2% of its games since the start of last year.

Here’s a comparison of overall success between the most successful programs:

Only the Razorback soccer team eclipses softball’s conference success by winning  88.9% of its SEC games in 2020 and 2021.

This comparison doesn’t reflect any kind of rivalry between the men’s and women’s program. None exists, as both sides help make each other stronger. Men’s coaches like Sam Pittman and Eric Musselman regularly attend support the women Razorbacks and give shouts on social media.

Instead, the comparison is only meant to highlight how great the softball program has been in an era when all the major team sports are doing so well. “This may raise a lot of eyebrows, but I’m going to say that right now, with where they are, they may be the best program on campus,” Arkansas sportscaster Mike Irwin said on “Ask Mike.”

The next opportunity to catch the Razorbacks at Bogle Park will be when the NCAA Tournament begins in three weeks. Here’s a primer:

For starters, Arkansas has the reigning SEC Pitcher of the Year in Mary Haff. She’s the second best pitcher on the roster in 2022. Chenise Delce, a transfer from Tulsa, is an All-SEC caliber arm. Her 2.03 earned-run average is second in the SEC among the league’s starters. She has 138 strikeouts in 106 2/3 innings and opponents are hitting just .213 against her. Haff leads the team in wins with 15 and opponents are batting only .227 against her. In other words, Arkansas pretty much has two starters as good as any duo in the country.

Even if they’re not on, which is rare, Arkansas counters with the top offense in the SEC. The Razorbacks lead the SEC in batting average by 14 percentage points. Their 89 homers are just one behind the conference leader. They get on base 44 percent of the time and they’re the second best club in the league when it comes to not striking out. In an era of the Three True Outcomes (which isn’t as significant in softball as it is in baseball, but still), the last figure is remarkable.

If redshirt senior Danielle Gibson isn’t the SEC Player of the Year, something strange and perhaps borderline illegal happened. Earlier in her career, Gibson made national headlines by becoming just the second Division I player to ever hit for the home run cycle:

She hasn’t slowed down much since then. The Arkansas softball first baseman has had an absurd year, slashing .454/.506/.872. She’s lionized on a T-shirt for good reason.

Her teammate, Linnie Malkin, set the Arkansas record for single-season RBIs on Saturday and is up to 59 on the year with 17 home runs. Throw in Hannah Gammill’s 16 homers and .882 slugging percentage and good luck finding a weak spot in the middle of the Arkansas order.

Deifel has led the way through it all. She was an interesting hire at the time, having coached just one season leading a program. In her first and only year at Maryland, the Terps went 27-27 and didn’t make the NCAA Tournament. But then-athletic director Jeff Long saw something, remarking she was a “rising star” in the profession when he plucked her from College Park in June of 2015. In retrospect, there’s a strong argument that Deifel is the best hire Long made in his nearly decade-long tenure running Hogs athletics.

The Big Ten isn’t the SEC. Arkansas plays in the arguably the toughest – the Big 12 might counter that proclamation – in the country. Eight teams were ranked at the poll’s last release. The week before, there were 11 programs in the Top 25. The Hogs haven’t dropped a single series to any of their SEC brethren, either. The league is becoming in softball what it has been in baseball for the past 15 or so years.

Friday through Sunday in College Station, Texas, against A&M, Arkansas will go against the team second-from-bottom in the league. With a conference crown wrapped, Deifel and the Razorbacks may choose to rest a bit. But don’t count on it.

The memories of being the dregs of the SEC are fresh and motivating. The Razorbacks aren’t going to let off the proverbial gas. Not when they have a chance to do something no team in school history has: make the College World Series.

On top of that, Gibson ranks in the conference’s top 5 in home runs with 16 and RBI with 54. Through 47 games, Gibson has posted 21 multiple hit games, including seven with three or more hits, and 14 multiple RBI games. During the 2022 season, Gibson has broken the program’s career RBI (164) and total bases records (388) and currently sits second in career home runs with 44.

The senior infielder is one of 10 finalists for the USA Softball Collegiate Player of the Year award.