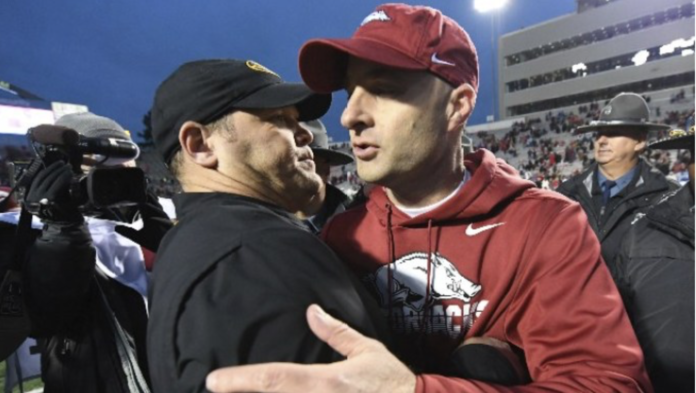 Sam Pittman’s hiring was supposed to signal two things primarily: a hard commit to getting deeper and tougher in the trenches, and an investment in–get this–recruiting.

Arkansas football needed an extreme makeover. Pittman’s not a young’un being charged with taking on a chore that he’s never quite experienced; keep in mind that the new head Hog has been in the profession for about 60% of his existence, and that he’s
seen rebuilds before from various perspectives.

In 2013, he was part of one in Fayetteville that, let’s face it, was trending progressively upward until there must’ve been a tiff* between Pittman, then the recruiting coordinator and associate head coach, and Bret Bielema.

It’s speculation still, but merited based on context.

At any rate, Pittman’s return to Fayetteville signals his genuine
interest in this place and what it used to represent, as far as
football is concerned. Before this tumultuous recent era of bike
wrecks, booze, bad judgment, and buffoonery, Arkansas at least was seen as a football program that had a history of winning the most when its offensive line was at its collective strongest.

Through Thursday, Sam Pittman had made only one staff hiring
official — that of former Missouri OL coach Brad Davis to take the same role at UA. Davis was looking for work after the changing of the guard at Columbia, and he’s highly competent and respected.

But he’s only the first piece of the puzzle to be in place. Rumors, just as they do with the head coaching position, really start to percolate when the support staff is being installed.

Therefore, it is of great public interest in these parts as to
Pittman’s selections. After all, for all the grief that the overseer
will get for decisions he makes along the way, there’s an estimated $7 million being allocated for Pittman to assemble his staff. It’s a
weighty charge for a first-time head coach to put this all together,
but here are some possibilities he may explore.

UPDATE: The below actually happened. Read more about it here:

The dismissed Missouri head coach had some measure of success in his four years there, but a fizzling finish to 2019 put him on the firing line. He’s a competent and smart coach who had been fairly successful developing the Tiger defense as coordinator thereof.

But he’s also only 43, and there may well be a few opportunities to remain a head coach in the offing.

Memphis seemed a potential destination after Mike Norvell’s departure, so the odds of Odom bringing his scheme here are pretty long. However, if any of these remaining vacancies fill, Odom will be zealously looking for work and maybe feeling the itch to draw up a scheme that will overcome his former employer next November.

After parting with Notre Dame, Long is in search of a place to turn a mobile quarterback loose in an offense anchored by a sizable line. Only 36, he was already a Broyles Award finalist in 2018. Long also has designs on getting a
head coaching position at some point. Fayetteville may represent his best opportunity to do so.

Long had a position on Bobby Petrino’s Arkansas staff as a graduate assistant before he took off on the typically circuitous path up the food chain. The Irish offense took a couple of notable steps back in 2019 but still produced, behind quarterback Ian Book, at a rate that is far and away more prodigious than anything Arkansas deployed these past two seasons.

Partridge was alongside Pittman on Bielema’s inaugural staff and then was snatched up by Florida Atlantic to get a shot at being a head coach.

The three-year experiment was unsuccessful, but Partridge remains a guy in his mid-40s who has performed well in a supporting role. He’s now at Pitt. Though his Southern ties essentially commenced and ended during those brief trips through Fayetteville and Boca Raton, he brings a sense of tenacity that the over-the-hill and outmatched John Chavis lacked.

Florida State was an indisputable mess under Willie Taggart, but Woodie’s linebacking corps there wasn’t necessarily the culprit. Woodie had previously worked under Taggart at South Florida. that.

Now, with Taggart taking over at Florida Atlantic, Woodie could be following his cohort again unless an opportunity to be a well-compensated position coach at an SEC school beckons.

The Memphis OC certainly didn’t get the attention that Mike Norvell commanded. But he’s worked with the high-flying offenses there, at Texas Tech, and previously at Indiana. Johns’ stock would seem to be well up after the year that Memphis signal-caller Brady White had, though admittedly he’s only been there for a single year. He will likely draw some interest from Norvell’s successor there.

Beau Wilcox is a longtime sports columnist for the Arkansas Times. Catch his weekly column “Pearls About Swine.”

The falling in 2015 between Sam Pittman and Bret Bielema was (apparently) briefly chronicled in a rant post written by one of Pittman’s friends in the Fayetteville Flyer.

The piece was so explosive that it was taken down, but it’s been preserved on SECrant and on Hogville.com.

It’s a piece of work, full of all-caps screamy type and exclamation type. Here’s a snippet:

“[SAM PITTMAN] DID NOT WANT TO LEAVE – HE TOLD ME MANY TIMES HE WANTED THIS TO BE HIS LAST STOP! -The truth is he was being asked to clean up more and more that he was not comfortable with. -Stop and ask yourself why Brett threw such a fit when Sam told him he was leaving? -Why did Bret go so below the belt in lashing out at Pittman?

Last year he went on and on about “taking Sam at his word” when he talked about the lack of non-compete clause for other SEC teams in his contract. -Why did Brett load up all the O-lineman and take them to his house to try and talk him out of it? He knew he could not do it by himself! He put the ultimate peer pressure on Sam and tried to make him look bad – and he didn’t crack! -Why did Brett call the next day and cuss him out on his speakerphone while his wife was in the car? Why did he yell and scream at Sam and call his wife Jamie the “B” word? He didnt respond, he just ended the call.

Now try and remember what you heard back last year from Coach Pittman? -Not a cross word on tv! -Not one negative word on social media! -Remember his O-lineman? – HE WANTED TO TELL THEM SO BADLY WHILE THEY WERE AT HIS HOUSE, but not a bad word was uttered to them! They left that night being told that Coach Pittman was a quitter and he had broken his word to them! The only thing UNCOMMON in this situation is the Integrety of Coach Pittman.”