This article about Little Rock Gibbs (then a high school) vs. Manassas High in football is proof 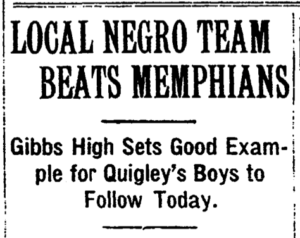 One Little Rock-Memphis football argument was settled  here yesterday when the “Tigers” went down in defeat.

These Tigers, however, were of ebony hue and African origin, and their lair is the Manassas High School of Memphis. [Yeah, I’m cringing, too, as I read this in 2018] They were defeated by the Bearcats of Gibbs High School, negro, of Little Rock. The score was 14 to 13.

The Bearcats set an excellent example and if the Tigers of Little Rock High School do as well in that other Little Rock-Memphis classic today, the rejoicing will be general.

Jefferies of the Bearcats made the first touchdown of the game on a forward pass, running 40 yards for the goal line. Then he kicked the extra point. Ogles caught a fumble and tore through the ebony Tigers for 75 yards and the second touchdown. Jefferies again kicked goal.

The Tigers’ first touchdown was made by Wilson on a pass and the goal was kicked by Clark. Another forward pass was completed for 35 yards and Wilson scored again. The try for the extra point was blocked by Bearcat Jackson.

The Bearcats’ next game will be with Merrill High School of Pine Bluff. Merrill defeated Gibbs last year, 6 to 0. 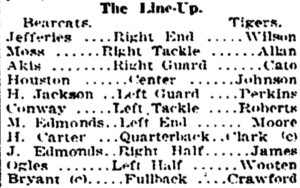