A run down of 2018 College World Series predictions from experts, with a focus on the Razorbacks:

LSU coach Paul Ranieri (via Sport and Story with Bo Mattingly)
“I know how hard Dave Van Horn works. They’ve got a great ball club and deserve it. I told him before the season that this was his year, he’s gonna win it all this year. I texted him that this morning, and I hope they do…”

“I’ve got Oregon State against Arkansas in the finals and I got Arkansas beating the Beavers for the national championship.”

Mike Lananna: “Florida is the clear favorite in this bracket. Obviously I think Arkansas is a team that has a really good chance as well. They have been in and around the top 5, top 10 all year. They’re playing really, really hot right now, but you have to go with the Gators until proven otherwise.”

Teddy Cahill on Texas’ power hitter Kody Clemens, who has a home run in each of his last five games: “A big debate over the past weekend was ‘Why is Tennessee Tech bothering to pitch to him at all? Just give him four balls and put him on base.’ So it’ll be interesting to see how Arkansas handles that in the opener.”

Aaron Fitt: “The Hogs — they’re a ferocious offensive team. We’ve said it all year long: Top to bottom, there’s no team that scares you more with the power in their lineup — with guys who can drive the ball out of the park, up and down the lineup. The power will be suppressed a little bit at TD Ameritrade, but you can still hit homeruns there.

If a team can hit home runs they can also hit doubles. This team has a bunch of mature hitters and I think they can adjust their style. I like the fact they have premium arms. They’re kinda like Florida, where in addition to having the offensive firepower they have arms that can shut you down.

And certainly Blaine Knight in that first game is a good place to start.

He’s a perfect matchup for Texas. He’s one of those calm guys who’s gonna hit the strike zone like crazy with that fastball, slider and that curve. One of the good developments for Arkansas was that Isaiah Campbell went out there. He gave up two runs in four innings — the fact he went out there and gave him four innings after he didn’t even get an out last weekend is kind of a step forward. I have a lot of confidence in Kacey Murphy [too].”

Arkansas is in a really good spot right now. I love this team… If you can keep Arkansas from getting their groove offensively early in the game, I feel like you can at times kind of hold them at bay. But I think Arkansas is one of those teams which if they get hot early, man they’re just like a steam engine — you’re not stopping them.

If [Texas] can go the first three innings or so and keep them out of their rhythm, they might have a chance here.

Aaron Fitt:  “When Arkansas jumps out to an early lead, they’re just a beast. They’re one of those momentum offenses. I think it’s a tough assignment for Texas. I really like Arkansas’ chances.”

“The question with them, again, is pitching. Blaine Knight was Blaine Knight in the first game of the series. Kacey Murphy in the second game was less than OK — walked four guys and gave up four runs in four and a third innings… It comes down to what can they do on the pitching staff behind Blaine Knight.”

Obviously, in the College World Series you gotta have more than one guy. The schedule sets up to where you can have maybe two guys, but you got to have two.

Sports Illustrated’s Eric Single ranks Arkansas as the second-best team in the field:

“This may not have been the best lineup in the SEC this season, but it was probably the most complete one. Arkansas hit .300 as a team and finished third in the nation with 88 home runs—the first six hitters in the order have between eight and 14 apiece. The Hogs are patient at the plate and make the most of their limited stolen base attempts, on which they are 39 out of 50 for the year.”

SB Nation’s Jim Lohmar ranks Arkansas as having the fifth-highest chance of a title in this College World Series, behind Texas Tech, UNC, Florida and Oregon State:

“Arkansas will undoubtedly rely on the right arm of ace pitcher Blaine Knight, who is 12-0 on the year with a 2.84 ERA. Opposing batters are averaging just .226 against him, and if Arky wants to steal this bracket, Knight will have to keep clean with a low pitch count in the opener and go full workhorse as the tilt unfolds.”

Bleacher Report’s Joel Reuter’s College World Series prediction: Florida will beat Oregon State two games to one in the championship round. He has Arkansas beating Texas, then losing to Texas Tech and Florida.

If you enjoyed this, check out my posts looking at if Arkansas will finally win a baseball national championship — and if they are the nation’s second most “due” program for that title. 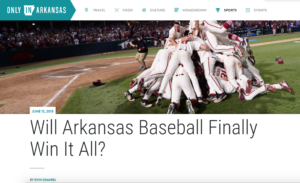