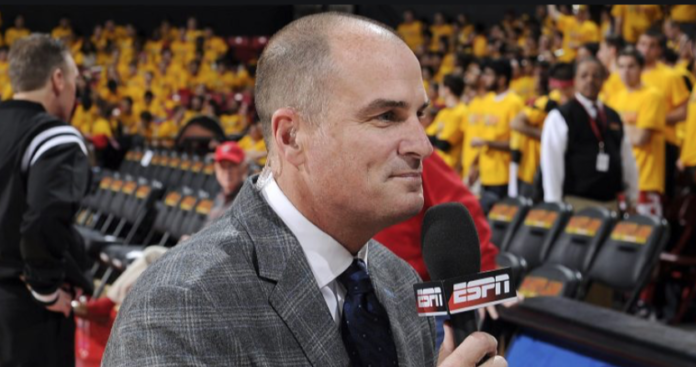 Jay Bilas doesn’t have a beef, per se, with the Hogs.

The ESPN commentator has given Razorback basketball its due in the past, praising Moses Moody and the Triplets, but in this NCAA Tournament he’s been far from impressed.

In the first round, as No. 3 Arkansas fell behind by 14 points to No. 14 Colgate, he Tweeted: “Arkansas not taking Colgate seriously, coming out flat, and paying the price early.”

“Colgate is having fun, which means the Razorbacks weren’t ready for a fight.”

Arkansas righted the ship and eventually pulled away for the decisive win, but it wasn’t enough to persuade Bilas they are soon destined for defeat.

The former Duke assistant coach and lawyer who once litigated against Barney the Dinosaur thinks it will happen tonight to the hands of Texas Tech.

“Texas Tech does a good job of playing at different speeds, and they are very good defensively,” he said on the Twitter Q&A below.

“Big 12 play has made Texas Tech a tough team and with Mac McClung and Terrence Shannon I give them a good opportunity to beat Arkansas.

Q: How do you think Texas Tech will match up against Arkansas given their defensive performance in their last game #askJayBilas
– @ttuchiefsfan34

A: I like Texas Tech’s chances. Picked TTU to win in my bracket. pic.twitter.com/jLH9RxUPQz

Still, in predicting Texas Tech will beat Arkansas, Bilas isn’t exactly going out on a limb as CBS Sports’ Seth Davis did when he predicted that Colgate would upset Arkansas in the first round.

Arkansas coach Eric Musselman said that kind of high-profile doubt coming from the national media helped fuel the Razorbacks as they seek their first Sweet 16 appearance since 1996.

This time around, there is no shortage of people picking against the Hogs.

No. 6 Texas Tech, which is seeking its third consecutive Elite Eight appearance, is the slight favorite coming up into this evening’s game despite being a lower seed.

That’s the kind of respect that insiders give Red Raiders coach Chris Beard, who led Texas Tech to a national runner up finish in 2019. Beard, however, will have his hands full with a Razorback basketball team that pairs elite defensive efficiency with devastating offensive potential.

Arkansas vs Texas Tech promises to be one of the most physical, intense and fundamentally sound matchups in the first weekend of the 2021 NCAA Tournament.

Arkansas vs Texas Tech: How They Match Up

In what should be a competitive matchup, there is also plenty of star power between Mac McClung and Moses Moody. Both these guards have earned national attention averaging over 15 points a game. Moody is the more versatile of the two averaging nearly 6 rebounds per game to match his 17 points per game.

Beyond the leaders, both teams have great depth across the board with four players averaging double-digits points for each team. On the surface, the game appears to be a contrast in styles as Arkansas ranks No. 7 in the country in ppg (82.5) while Texas Tech ranks No. 23 in the country in opponents’ points per game (63).

A closer look, however, reveals a few surprising similarities between the squads.

Both squads have balanced attacks with defense that slightly outperform offenses from a metrics standpoint.

The main difference is likely seen in the pace of play. The Hogs look to push the ball on offense while Texas Tech takes a more methodical approach in their halfcourt offense.

When the Red Raiders Have the Ball

Texas Tech will look to attack the inside against a solid Arkansas defense. Texas Tech produces the 32nd offense in the country and will matchup against the 10th-ranked Razorback defense, according to KenPom.

As you can see in the roster below, the Red Raiders rely on four guards averaging over 10 points a game to lead their offense. This approach should bode well for an Arkansas roster with strong defensive guard play.

Luckily for the Razorbacks, their weakness, three-point defense, shouldn’t be as much of a hindrance against a poor perimeter offense.

Still, Texas Tech has very talented players with an elite coach in Chris Beard. Look for Mac McClung to make a handful of highlight plays while he opens up the offense for an undersized group.

It will be interesting to see if the Hogs elect to pressure a Texas Tech team that takes care of the ball very well. Eric Musselman will likely make this decision as the game progresses and the scheme is established.

Most likely, Musselman will employ a variety of traps and double team tactics against McClung in an attempt to disrupt the timing of Texas Tech’s offense. I

In the past, this has worked against the likes of Auburn’s Sharife Cooper. Beard and his staff, however, will prepare for this likelihood and come out ready for it. How Musselman, in turn, counteracts will be one of the most interesting aspects of this chess match between two masters.

Despite a relatively small roster, 328th in effective height (smallest in the NCAA Tournament), the Raiders actually rebound the ball well on the offensive end.

It will be important for Arkansas defenders to attack rebounds when the Raiders miss shots. Expect Hogs big man Jaylin Williams, who was relegated to the bench for most of the Colgate game, to play a bigger role in this game.

His physicality, shot blocking and rebounding will be needed. 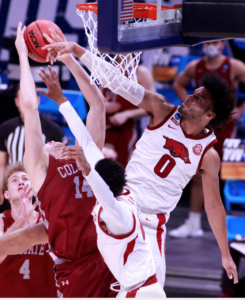 When the Razorbacks Have the Ball

The Hogs will likely have to go small to match up with the athletic Texas Tech squad if Williams and/or Connor Vanover struggle early on.

As a result, we may see Justin Smith (pictured in above image) in the 5 position again surrounded by four guards. If this is the case, the Razorbacks will look to attack and kick outside to take advantage of a poor perimeter defense that ranks 219th in the country.

The Hogs may also have an advantage when it comes to offensive rebounding. Texas Tech has struggled to keep teams from second chances.

In this category, guards like Devo Davis and Jalen Tate could shine. Against Colgate, Davis played a key role utilizing his length and athleticism to push the ball in transition. He will play an important role in defending the elite guard play of Texas Tech and in spreading the floor on the offensive end.

If Justin Smith can continue his excellent play from the previous game (29 points,13 rebounds, and 5 steals), he could be the difference in this close matchup. His size and maturity will strain Chris Beard’s defense as they try to contain a hot Razorback offense.

Look for Eric Musselman to encourage his efficient transition offense to push the ball off of rebounds and attack off of Texas Tech misses.

Metrics, analysts, and Vegas all agree that this will be a great game. Texas Tech enters the game as one-point favorites, but this is essentially a toss-up.

If the Razorbacks are able to avoid a slow start, like they experienced against Colgate, I like their chances down the stretch.

This will be a matchup of star players, passionate fan bases, and elite coaches as they fight for a spot in the Sweet 16. In what should be one of the best games of the weekends, look for the Hogs to leverage their size, scheme and talent in the quest to end their 25-year Sweet 16 drought.

Yes, Bilas did actually enter the courtroom against Barney:

The 6’6″ Arkansas guard is the only player on this Arkansas team who had played in an NCAA Tournament game before this season.

It came in 2019, when his former team Northern Kentucky played Texas Tech in the first round.

It ended in a 72-57 defeat. Tate delivered a forgettable performance with six points, six assists, four steals and three rebounds. He shot just 2-of-12 from the field and had six turnovers.

“Me playing them a couple of years back, it is destiny and it gives me a chance to get a bit of get-back,” he said in a Saturday press conference.

“But at the same time, it also allows me to be able to tell our guys a little bit of what’s coming.”

“Just trying to go through that when we go through prep today, just as far as we have to take care of the ball,” he added.

“They like to get out in transition and they have some really good players over there, some of which were there when I was even there. I know the Edwards guy was there, the 2-guard.”

“As far as Chris Beard’s team, you heard Coach [Musselman] speak to it a little bit. His teams play really hard, and they take on his identity on the court a little bit, so they’re going to be fired up, ready to play, and so are we.”

How to Watch Texas Tech vs Arkansas

Updated odds to make it out of the South Region

Look Who’s Got Arkansas Basketball Heading to the Final Four