One down. Three more to go.

For Arkansas basketball fans to feel like this season has been an unqualified success, the Hogs need to notch just one more win. Making the Sweet 16 would be a big deal.

But for the program to announce its full return to elite status, it needs to return to the Final Four for the first time in 26 years.

On Thursday, No. 3-seeded Arkansas took care of business by beating an athletically overmatched No. 14-seeded Colgate team 85-68.

It was much closer than the final score indicated.

The Hogs needed a huge run at the end of the first half and then another one in the final minutes to pull away for good.

They also needed folks to step up with the team’s best player, Moses Moody, having subpar game.

So Justin Smith answered the bell, and then some. The 6’7″ forward/center produced the game of his life, putting up 29 points and 13 rebounds as the Hogs’ only big man through almost all the final three quarters of the game.

After the game, Eric Musselman said going small ball with Smith at center “would help us speed the game up, and I thought Justin could protect the rim against their bigs.”

“Obviously, Connor [Vanover] has been a big part of what we’ve done all year, Jaylin Williams has, Ethan has, but tonight that was a way to change the tempo of the game.”

Musselman added: “I just thought the combination of strength, speed, athleticism would be a lot for their frontline to handle,” coach Eric Musselman said afterward. “I knew if we went to [small ball], it might hurt us a little bit on the glass, which again, we didn’t win the rebounding battle.”

Arkansas’ next opponent will be Texas Tech, a tough, physical team led by coach Chris Beard.

They are also experienced after finishing as national runner ups the last time the NCAA Tournament was played in 2019.

But if the Hogs beat Texas Tech, then their path to the Final Four looks like a lot more wide open than it did earlier on Thursday.

That’s because in a late afternoon game, No. 15 Oral Roberts knocked off No. 2 Ohio State to score the upset of the tournament so far.

As well as the small ball-oriented Oral Roberts played against OSU, they will be hard-pressed to keep up with an Arkansas basketball team that beat them earlier this season 87-76. Justin Smith also had a huge night in that one, putting up 22 points and 17 rebounds.

The other team Arkansas could play in the Round of 16 is Florida, whom the Hogs have also ready beaten this season.

Not that Musselman and his guys are looking ahead.

“I’m really proud of you,” Musselman told them after beating Colgate.

“But, men, we’re 40 minutes away for being in the Sweet 16. We’re one game from getting to a huge goal of ours. So you’ve got to really prepare.”

“Here’s other thing — I did not come into this game thinking Justin [Smith] was going to play center. That never came into our staff meeting. Okay. That’s how it unfolded. I don’t know what’s going to unfold in the next game.”

Razorbacks Headed to the Final Four?

If Arkansas beats Texas Tech and then Oral Roberts/Florida, the Hogs’ Elite Eight opponent could be No. 1 seed Baylor. The Bears will be their toughest challenge of the season so far, but Arkansas has proven it’s capable of beating anybody when clicking on all cylinders.

Plenty of analysts in the mainstream media are believers, too.

“Alabama is one of my picks, but out of that league, I’m also going with Arkansas — because back on February 24, at Arkansas, my man Moses Moody just did a number on Alabama and they won 81-66,” Bayless said on Undisputed.

“That was the game of the year for Arkansas coached by my guy Eric Musselman, who I knew pretty well when he coached the Golden State Warriors. I know he’s bounced around a little bit, but he’s coaching the heck out of Arkansas, so they’re my second team.”

Bayless added he thinks Alabama will beat Arkansas in the championship game. 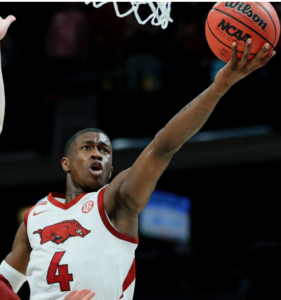 Yahoo sportswriters Pete Thamel and Krysten Peek each picked Arkansas to make it to the national championship game, where they would lose to Gonzaga. Thamel had Arkansas beating Texas Tech, Ohio State and North Carolina to get there.

Peek saw the same path to the Final Four for the Hogs, but a matchup with Baylor there instead of North Carolina.

Over at the Mothership, most analysts favor Baylor coming out of Arkansas’ South region.

The next-most popular pick out of the South was No. 2 seed Ohio State, which had eight foolish-looking believers in its chances to be playing into April, followed by three Arkansas supporters. BPI pegs Baylor with a 40% chance of reaching the Final Four, the second-best odds behind only Gonzaga.

The sprawling multi-tentacled media monster polled 38 of its experts on the teams that would make the Final Four. Gonzaga was the most common pick.

Even Jimmy Dykes, the Arkansas native and former Razorback basketball coach, doesn’t think the Hogs will make it this far. He predicts the Final Four will be Gonzaga (champion), Alabama, Baylor and Illinois.

However, Myron Medcalf (who wrote this fine feature on Nolan Richardson) is a believer.

The folks over at ESPN’s 538 project have a prediction model that incorporates computer generated rankings like KenPom, Sagarin and ESPN’s BPI, as well as human rankings like the AP top 25 poll.

The above has Arkansas’ chances of beating Texas Tech at 49%, of beating Florida/Oral Roberts 34% (not much respect there) and 12 % for beating an Elite Eight opponent and getting into the Final Four.

The Razorbacks are projected to have a 5% chance of making the national title game and 2% to win it all.

“We exchange calls, a text every once in a while, a lot of respect for what he did at Nevada. We played those guys in Lubbock in a really tough game we were fortunate to win. I have a lot of pride in the state of Arkansas, Little Rock will always be special to me. Got my first Division I opportunity there, and I just love that state. I follow that program.”

[Indeed, for a while it seemed like Chris Beard was in the running for the UA job that Musselman eventually got.]

“He’s doing a great job, and so a lot of respect for their program. I’ve seen them play as a fan this year.”

“When you play 18 Big 12 games and you play in my opinion one of the most disciplined teams in the tournament in Game 1, Utah State, it’s not going to be an excuse that we haven’t been challenged.”

In the day after Indiana fired Archie Miller, reports emerged that Eric Musselman was being targeted as a top candidate.

Since then, however, those talks have lost some steam.

The latest BetOnline odds around Indiana’s next coach have Beard in the lead:

Read our full preview of Texas Tech vs Arkansas here:

Per @ESPNStatsInfo, No. 6 Texas Tech opens as 1-point favorite over 3 Arkansas.

This would be the 8th time since seeding began that a No. 6 is favored over a No. 3 in the second round. The most recent happened in 2004 with Wisconsin was favored over Pitt and UNC favored over Texas.

The favored 6-seeds are 2-5 straight up and ATS.

Charles Barkley already has Arkansas basketball heading to the Sweet 16. See why here:

After Ernie Johnson, Kenny "The Jet" Smith, & Charles Barkley broke down highlights on TNT from Arkansas' 85-68 win over Colgate, the Chuckster picked the Hogs to beat Texas Tech in the Round of 32 on Sunday … watch & hear it all here … pic.twitter.com/LtY9I0jZJ5