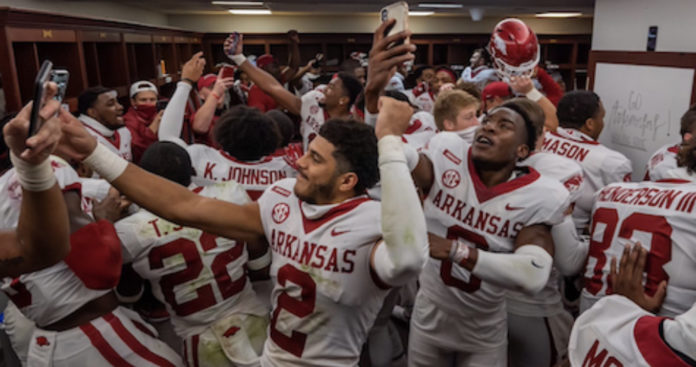 What a difference a year makes.

Every time a new coach is hired, especially in the collegiate ranks, a measure of hope, if not outright happiness, runs anew. Honeymoon periods vary, but it’s generally accepted that the new head of a program gets two or three years of near-absolute freedom. In this time, seeing the culture – whatever that means – changing is more important than marks on the win-loss ledger.

When the new coach, though, was previously connected to the program in some form or fashion (such as a former player or assistant coach) that timeline tends to lend itself closer to that three-year mark.

Matt Luke, the former Ole Miss center, got three years at his alma mater (if you count his interim season) before he was booted out the door.

Down at Mississippi State, Joe Moorhead — who had no previous ties to MSU — only got two seasons before the curtain closed. Same with Chad Morris at Arkansas, of course.

When he was hired, Arkansas football faithful, whether the fandom or those in the system itself, were over the moon. Morris had the personality blend of a revival preacher and Burt Reynolds character from the 1970s. Catchphrases galore and a down-home sensibility. His was a disposition seemingly perfect for this working-class Southern state.

Sam Pittman, blessedly, isn’t Morris. Not in temperament. Not in facade. Not in his relationship with his players.

Pittman is what Arkansas hoped Morris would be. Players glow, in honest answers and genuine terms, about what he has created. They don’t seem to be delivering canned lines supplied by the hours of tutelage spent with the Arkansas media communications staff. With him, a kindness and decency lingers around Donald W. Reynolds Razorback Stadium.

Kindness and decency are great. Most of the Arkansas roster won’t play football after leaving Fayetteville. They’ll become men. Engineers and publicists. Working for Walmart or opening their own business. They’ll be fathers and husbands and lifelong bachelors. All of them will navigate through life with lessons they learned playing college football. Not unlike any of the rest of us, save the football.

But more often than not kindness and decency and winning results are mutually exclusive. Arkansas hired Pittman to win football games. Everything else is ancillary. Another three-win year would put Arkansas back on the skids.

The Razorbacks may have only won one more game in 2020, Pittman’s first year, than they did in each of the two previous seasons. But it was without the benefit of non conference games, which would have, probably, yielded another three wins.

Incremental changes are acceptable as long as they’re upward. Statistics suggest Arkansas, as a team, was actually worse in 2020. The pass defense gave up an additional 30 yards per game in 2020 compared to 2019. The offensive line went from giving up 19 sacks to 34 sacks. Minimal improvements were made with the rushing offense and rushing defense.

The eye test and outcomes say those things didn’t actually matter as much. And a stats-only look doesn’t tell the entire story, either, because Arkansas didn’t have an opportunity to improve its numbers against out-of-league opponents.

The numbers will have to improve in 2021 to see the upward trend continue. Allowing five touchdowns a game isn’t sustainable. Arkansas gave up 34.9 points per last year, 10th in the SEC. Again, the number is higher than reality because of the lack of non conference foes. It’s also skewed by Florida’s 63 points and Alabama’s 52.

The Arkansas football team certainly doesn’t want to get into many more six-, seven- and eight-touchdown shootouts with opponents like Ole Miss, Mississippi State and Auburn, though. Especially not when those are the three nearest teams to the Razorbacks in the SEC West standings.

They especially don’t want to do it with a first-year starter at quarterback. It portends negative results. Not that KJ Jefferson won’t shine. That’s to-be-determined. He’s been touted as the future since debuting in 2019. His numbers as a freshman were mixed, but acceptable for a first-year player.

In his only extended time last year, he went 18 for 33 for 274 yards and three touchdowns with nary an interception against Missouri. Arkansas lost, 50-48. So, the standard holds: shootouts don’t seem like the way to go.

But that experience should be a blessing for Jefferson as he goes into his first season as the unquestioned starter. With Trelon Smith behind him as a potential All-SEC back and perhaps the country’s best wide receiver in Treylon Burks on the outside, Jefferson has weapons. Outside of those two, however, those weapons lack much of a past. Wide receiver De’Vion Warren is the next most prolific player at a skill position and he has just 25 career catches.

A big reason for their high tackle totals, though (111, 101 and 99, respectively), was Arkansas’ lack of a defensive front. Opposing backs had little trouble breaking through the line and getting to the second level. Teams ran for an average of 192 yards per game against the Razorbacks last year, the 92nd-ranked average in the nation among 127 teams.

Positive vibes and camaraderie are great. Important, too. Arkansas wouldn’t have won the three games it did last year without them and probably would win fewer than the projected five or six this season without them, too. The question is whether those positive vibes are enough to eclipse the three-win mark.

Oklahoma and Texas are set to join the SEC, likely in time for the 2025 season. Yes, one can say that is four years away. But if you give a three-year honeymoon for Sam Pittman, as most coaches get, then it leaves just two years to build a status quo good enough to fight off the Sooners, Longhorns, LSU and Texas A&M. Nevermind Ole Miss, Mississippi State and Missouri.

The SEC West would become unquestionably more difficult with Oklahoma and Texas unless the league decides to shift Auburn and Alabama to the SEC East, as is currently expected. League wins will become even tougher to come by, on a whole.

Unless Arkansas falls off the table, fails to win more than two non conference games and gets just a single SEC win, then Pittman will have bought himself a third season’s worth of honeymoon.

He can thank his predecessor’s absolute debacle for that. The messy roster and shoddy relationships Chad Morris created take time to repair. One year into the remodel, the superficial scars are lightening.

Six months from now, they need to be practically gone.