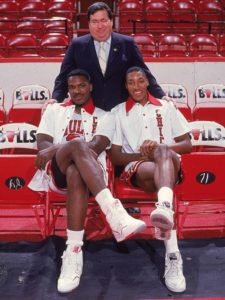 Arkansas native Scottie Pippen, Alabama native Charles Barkley and Ohioan Charles Oakley have a long history of disagreement. Oakley and Barkley have seemingly never gotten along, with perhaps the worst of it coming in 1999 around the time of a lockout. Oakley, then a free agent, claimed he power-slapped  Barkley, then heavily involved in the players’  union, in the face — during a meeting. “I’m fed up with him, ” Oakley later said. “I told him you need to change your name. I’m the only Charles.”

This was coming off Oakley’s decade-long stint as a key player for the Knicks, a perennial playoff opponent of the mighty Bulls, which featured Pippen and Michael Jordan. Yet even when Pippen and Oakley were Bulls teammates in the late 1980s, Oakley was still slapping the mess out of him.

Check this evidence from the Pippen’s rookie season in 1987-88:

At last, though, these three can agree on something: the best team of the 1990s was a helluva lot better than the best team of this decade. The debate of whether the 1995-96 Chicago Bulls or 2015-16 Golden State Warriors are better has been raging all season long, with Charles Barkley wading in early. “That Bulls team would kill this little team,” Barkley said in December.

Pippin got into the action a few months later, opining that if the ’96 Bulls were matched up with the ’16 Warriors in a seven-game series he and Jordan would cause severe problems for the Warriors’ gunners with their length and quickness.  Enough problems to sweep the Dubs.

Finally, Oakley joined into the fray yesterday on The Mike & Mike Show. He gave his take on the NBA Finals between Cleveland and Golden State and upcoming Game 6, in which Cleveland is a slight favorite according to William Hill. Then Oakley was reminded of Pippen’s take and asked for his own on the same question.

I think Scottie might be right,” Oakley said.  “They were too long, they had some great guys back then and like I said, to play in my era, you had to be a student of the game. I don’t see that no more. I see guys  out there just playing basketball and doing individual stuff, not team chemistry. Golden State is pretty fine playing together as far as guys knowing who should get the ball, who shouldn’t get the ball.”

“I think the Bulls, there was Scottie, Michael, Ron Harper, Horace, everybody just knowing that whatever they do, they got to shut down scorers. I think they’ll really trap guys, they’ll work guys with the ball coming up the court, and I don’t think [the Warriors] will have the legs by the time the fourth quarter comes — because they having to be really, really strong individuals.

I think some of them are, but I think that being smart, like I said the Bulls wouldn’t be winning six, seven, eight years if they wasn’t that smart of a team. They had to go through a lot with other teams and on the court and they found a way to win.”

I can see why Oakley would reflexively think more highly of his own generation, but I don’t agree with his reasoning. The NBA is more team-oriented and complex now than it was 20 years ago. The elimination of the illegal defense rule has created a domino effect which has allowed teams to deploy complex and sophisticated zone and hybrid defenses. Those, in turn, have inspired the evolution of more intricate and fluid offenses, like the one which the Warriors employ as they hunt for a dynasty of their own.