As you know, Hamburg native Scottie Pippen made the original Dream Team in 1992 and the 1996 Olympic team which grabbed Gold in Atlanta. Pippen made by far the greatest splash of any national team Arkansan, but he wasn’t the first to do so in an Olympics. That honor goes to Gordon Carpenter, native of Ash Flat in northeast Arkansas. And there are plenty others who have made national teams for other competitions. Below, I present the first (and I will bet you $25 only) comprehensive list anybody has ever bothered to assemble on the topic:

Carpenter, a 6’6″, 200-pound big affectionately known as “Shorty,” was one of Arkansas’ first great basketball players. He led Ash Flat in northeast Arkansas to the 1939, upsetting much bigger teams in Little Rock and Pine Bluff,  and then went on to star on the University of Arkansas’ first Final Four team in 1941. He led the Hogs to their first undefeated SWC record and ended his college career on the All-SWC team.

He then played for the Phillips 66 powerhouse basketball team, which was technically amateur and allowed him to retain eligibility for international play (the Olympics were then off-limits to paid professional athletes). The Phillips 66 team was on par with the best professional teams of the era, and Carpenter helped lead them to six straight national titles. He made the AAU All-America team each year from 1943-1947 and helped his team qualify to represent the U.S. in the 1948 Olympics by beating the University of Kentucky in a Madison Square Garden (weird, I know).

In those London Olympics, Carpenter had a turn as hero, according to this book. In a game against Argentina, the U.S. was trailing by six points with four minutes to go. Coach then inserted Carpenter and he scored 10 points in two minutes to help the Americans turn the tide and win. The final score of the game was 59-57, according to linguasport.com.

A native of Tuckerman in Sharp Co., the 6’8″, 240-pound Barnes trumps Corliss Williamson, Andrew Lang (and so far Bobby Portis) as the most dominant collegian big man the state has produced. He was dirt poor as a child, often playing in socks because his family couldn’t afford shoes. Around 18 years of age, he moved to Oklahoma to finish high school. Barnes then dominated junior college competition for two years, and then did the same at Texas Western. He averaged 29 points and 19 rebounds his senior year, and a few months later became the first of two Arkansans ever drafted #1 overall in an NBA or NFL draft.

Before his pro career, though, Barnes traveled to Tokyo with other top collegians like Larry Brown and Bill Bradley. He was the fifth-leading scorer on the Gold-winning team. In the Finals, the U.S. squared off against the U.S.S.R.  Barnes’ speed and agility, like center Bill Russell’s four years before, was a big reason the Soviets could not hang with the Americans.

That team’s head coach was Henry Iba, who happened to the mentor of Barnes’ college coach Don Haskins. Coincidentally, Haskins became the mentor to Nolan Richardson, one of Barnes’ Texas Western teammates. Richardson thought highly of Barnes’ character: “Jim was one of those men who was thrilled to play for their country. He took the opportunity seriously and played every possession hard.”

When it comes to  Moncrief and Larry Bird sharing the same court, the headliner will forever be their legendary showdown in the Elite Eight of the 1979 NCAA Tournament. Before these two All-Americans clashed in front of a national audience, though, they had two summers before joined forces to topple other countries.

In 1977, the Little Rock native represented the U.S. in the World University Games (similar to what would be a U-21 competition today). Moncrief helped the U.S. tear through the event, in Bulgaria, with an 8-0 record. He led the Americans with 16 points in the finals against the U.S.S.R.

Undoubtedly, Sid shot the ball at a high clip that tourney. It’s amazing to think that as a freshman, the 6’4″ forward led the entire nation in field goal percentage, as this July 26, 1977 article  points out: 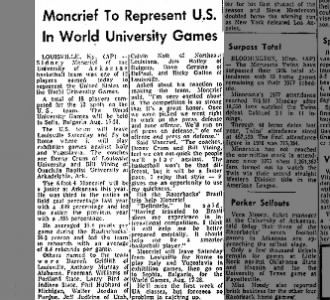 NB: You’ll notice one of the assistant coaches was none other than Bill Vining of Ouachita Baptist University in Arkadelphia. The national team program wanted coaches from all levels of college basketball, and Vining, being the small college level bad-ass he was, was selected to rep that segment.

Another one of Arkansas’ famed Triplets, Delph was a part of a wonky 1978 World Championship team made up of neither college or professional players. College players should have filled out its roster but by October – when the event occurred – they were already in preseason and prohibited from competing.

So the U.S. sent a squad made up mostly of Athletes In Action (a religious organization) ballers, and finished 6-4. This isn’t all that bad considering many of the communist national teams were made up of essentially professional players who had state-provided sinecure jobs.

Two years after Moncrief teamed up with a future Celtics great in Larry Bird, Razorback guard U.S. Reed did the same with another future Boston legend in Kevin McHale. At the 1979 World University Games in Mexico City, the Americans finished 7-1 and again took Gold.

The dominance this national team showed in one three-game stretch will likely never be equaled by its successors:

“Opening the preliminary round in impressive fashion, the USA roared past Jordan by 110 points, 144-34, then crushed Saudi Arabia 147-25. Scoring a USA record 173 points, the most points ever scored by a USA team in a major international tournament, Sudan was demolished 173-14. The U.S. team in its first three one-sided wins averaged 132.3 ppg. while only allowing 24.3 ppg. for an amazing average margin of victory of 108 points.”

Dear reader, it’s now time to hang my head in a shame. I admit unto you: I have been a bad historio-blogger, for I had no luck in tracking down individual statistics for Reed, a Pine Bluff native, in this tourney.

The Little Rock native was part of the last U.S. senior men’s team not to win Gold at a major international competition. The 2006 World Championships in Japan were the first Mike Kryzewski coached in the modern era of the U.S. national team basketball system.

Johnson fit the new-era prototype as a floor-spacing, three-point shooting wing with tremendous versatility and a team-first attitude. But he struggled in the nine games he played that summer. Johnson finished sixth on the team with 7.3 points a game, but only shot 39.3% from the field and 30.8% from beyond the arc.

Anderson, a Junction City native, was part of an extremely balanced squad that took Bronze in the 2009 World University Games after losing by a single point to Russia. He averaged 7.1 points and 2.4 rebounds. NB: In case you’re wondering, Anderson averaged a career high 10 points a game last year with Philadephia, but was waived from the team in early July.

What about all those former Razorbacks?

Yes, there are plenty former Razorbacks not mentioned above because they were born in other states. But it’s arguable that some of them – like Joe Kleine – have over the decades become every bit as Arkansan as any native. Below I tip my hat to the adopted Arkies:

Pitts was an All-SWC player and All-AAU player with Phillips 66 just like his Arkansas teammate Gordon Carpenter. According to his obituary, he played a crucial role in securing that team’s spot in the 1948 Olympics:

“Winning the [AAU] championship entitled the Oilers to compete against the Kentucky Wildcats to determine who would play on the Olympic basketball team. Playing on a severely sprained ankle, he finished the game as the top scorer and rebounder. This solidified his spot on the 1948 Olympic Basketball Team.”

These two Razorbacks made the squad along with Michael Jordan over the likes of Charles Barkley and John Stockton.

NB: Former NBA borderline star LaFayette Lever was born in Pine Bluff, but moved to Arizona around fourth grade. Jahlil Okafor – who many believe will be the first #1 overall pick in the 2015 NBA Draft – was born in Fort Smith but moved to Chicago around the same age. Both played on junior national teams.

The below events are international events, so they technically use U.S. national teams, but they do not have the cachet of some of the above events. The 20-year-old Hoop Summit, for instance, occurs annually, takes place within the U.S. and entails multiple national squads. It’s essentially an All-Star game. Still, it’s an honor for those chosen.

Charles O’Neill [Arkansas Tech] He was the team’s second leading scorer behind Don Barksdale, who in 1948 had been the first African-American to win Olympic Gold in basketball. In 1953, Barksdale would become the first black player to appear in an NBA All-Star Game.

One more NB: As far as coaches with Arkansas ties go, former Razorback assistant Gene Keady was an assistant on the Gold-winning 2000 Olympic squad. Ron Crawford and Joe Kleine, both through the Arkansas Wings, have been assistant coaches with Hoop Summit teams. Crawford coached in 1995 and 1996, and Kleine in 2004.