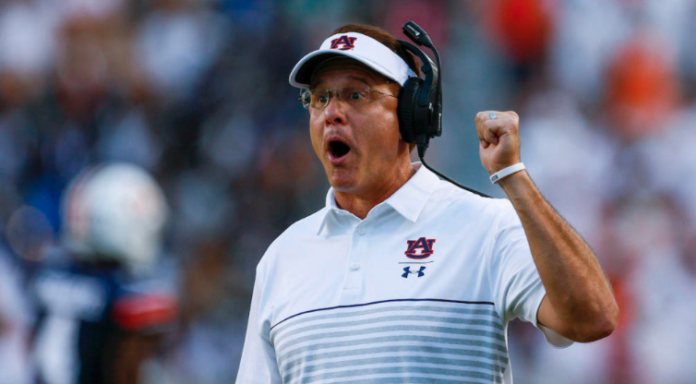 The biannual hate-on-Gus-Malzahn-a-thon is becoming a regular event in Arkansas coach searching circles. It’s been a rite of passage for Hog fans, and is now spreading into Arkansas media.

There is, of course, the way Gus Malzahn leveraged talks with Arkansas just two years ago to land a seven-year, $49 million extension with Auburn.

It was like he never seriously considered Arkansas, and analyst Mike Irwin hammered that point home recently on Pig Trail Nation.

“I know a few people that know him and I’m what told is if he came to Arkansas, it’s his third choice maybe,” Irwin said.

“Hunter Yurachek doesn’t work that way. He wants somebody that specifically wants to be here. That’s why he hired Eric Musselman [in the spring.] He told me to my face that there were some qualified candidates for that basketball job. I asked him about [Chris] Beard because that was the hot topic. Yurachek said ‘Even if he won the national championship, if he would come here, why would I want him?

Because I wouldn’t want somebody that would leave the school that they got that far with.

I want somebody that wants to be here.'”

Alyssa Orange, a co-host on Pig Trail Nation, also shared why she’s “not a big fan” of Malzahn beyond the way he played Arkansas in fall 2017:

“He’s always throwing people under the bus. He threw Rhett Lashlee under the bus. He fired his brother-in-law. There’s a lot of things about the way Gus Malzahn handles his business that I’m not a big fan of. I know there are a lot of people that like Gus, but I don’t necessarily think it would be a good idea for Arkansas to go back to Gus Malzahn.”

That whole 2006-07 mess when Malzahn coached for Houston Nutt

“I don’t know that he can undo the damage of that. That’s why when I hear people talk about Nutt coming back, it’s the same thing.”

“You’ve got people that are mad about all that stuff and I will tell you in all the years that I’ve covered this program, that two year period… was horrible because you were trying to follow a story with rumors and people telling you stuff, and this friend said this and this guy said that.”

“It was like “walking into the sixth grade bathroom where everybody’s gossiping about everybody.”

Through much of the last three years, quarterback play at Arkansas has been bad to horrible. Mike Leach, who developed a series of great quarterbacks Texas Tech and Washington State, would likely be an instant fix for that issue.

“With quarterback development, you know Mike Leach is gonna come in and bring a guy in that can run his offence immediately. And what about KJ Jefferson? He’s going to sit on KJ and he’s going to get them better and he’s gonna work on him,” Orange said.

“And then in a year or two when KJ is ready, KJ is going to go in and then blow up the stats. That’s what [Mike Leach] does. He has guys in the wings and then all of a sudden out of nowhere, here they come and start putting up crazy numbers.”

“Knowing someone who personally knows Mike Leach and been talking with him and getting some information, I know with good authority that he would take this job if the numbers were right.”

“People might see that 4-5 record and think that’s terrible at Washington State. But he’s got some things going on — his defensive coordinator quit — that he’s had to deal with this year. Look at what he was able to do at Texas Tech and really turn that program — Top 10 for the first time ever. Then he goes to Washington State and had them ranked 11th in the country last year”

“This is a guy who’s going to come here and is quirky enough to fit in with what Arkansas is. It’s a unique different kind of culture, kind of community and I think Mike Leach can embrace that.” She pointed at two other positives, too:

“He knows the state of Texas and the Southeast. Very good recruiting ties here. And now that he’s been in Washington, you can maybe try to pull some of that California and Washington talent.”

“You go out and you offer Mike Leach $6 million, gives you enough money to still get you a defensive coordinator… I’m really excited to see where this Mike Leach information goes….”

Mike Irwin chimed in, saying Leach has wanted the job since he was an assistant at Kentucky and hasn’t given up despite being blown off in the past.

“This last time [in 2017] he let it be known that he was interested in, and they didn’t bothered calling and let me just explain something to you. If you don’t get this, you get blown off like that, most people get mad after awhile. He still wants this job. He knows this is a place that he would be happy. This is the kind of place where he wins.”

He reminds Irwin of Frank Broyles in the way he’s developed assistant coaches into head coaches.

S
….. He’s like Frank [Broyles] in a lot of ways. Number one, he’s Frank-like in that you can recall over college football these days and see his footprint. You want to know the value of a head coach, go look at who coach for him and then went on to become head coaches. I think you can look at the last few head coaches we’ve had. Who do they have out there? Nobody.

“His Air Raid stuff has spread out to a lot of places.”

He’s also like Frank Broyles in that he’s wanted the Arkansas job for years, ever since he was an assistant at Kentucky. Broyles was the same way for about a decade, ever since his first trip to Fayetteville as a Baylor assistant in the late 1940s.

“He was at the old Mountain Inn which is now a parking lot, but it was a nice building at one time and you can look out the windows of that building toward the south and see all those mountains,” Irwin recalls Broyles telling me.

“And he said he got in his room the day before the game. He looked at all the mountains in the city below him and he said he decided to take a walk and he started walking down the sidewalk and he saw all these cars that said ‘Go Hogs.’ And he saw these things with pigtails on the antennaes of the cars. He kept talking to [former athletic director] John Barnhill, trying to get the job. Well, he didn’t.”

“Finally ends up at Missouri for a year and then got the job. And one of the first things he said when, when, well, John Barnhill called him and they said, John Barnhill is on the phone.”

Frank Broyles recounted the above story, plus many more, in his memoir “Hog Wild: The Autobiography of Frank Broyles.”

Make sure to watch the next Razorback head coach special below. The Pig Trail Nation team also discusses Mike Norvell at 13:50 and Lane Kiffin at 16:08 among other candidates: