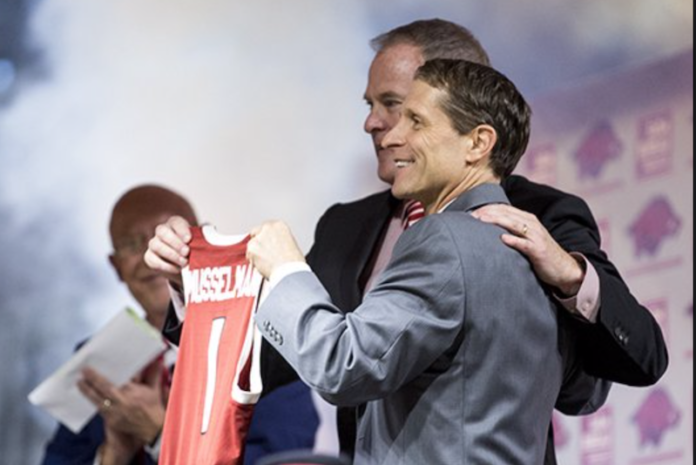 Diamond in the rough….

As I’ve said before, I’ve been impressed with Eric Musselman for his success on the court to this point.  Better understanding of how he coaches in practice shows what innovation combined with old school coaching can do for you.

A lot of what Musselman does comes from his dad, NBA lifer Bill Musselman, and spending years around the game.  The bottom line is that he changes it up in practice.  It’s not the same old thing every day, which has a lot of benefits, as you know, if you played on an organized team.

—It takes away the “going through the motions” aspect of practice

—It makes the players think

—It removes the dread and boredom of going to practice

I would have killed to have a coach like that at any point in my junior high and high school days.

—He has them write something about themselves on a golf ball, throw them all in a bag and then share with the team to get to know each other better

—They’ve used a football in practice

I’m beginning to see why the ’19-’20 Hogs look a little more disciplined than we have in the past.  Of course, all of this leads me back to the football coaching search…..

HUNTERING FOR THE NEXT COACH:

I’ll remind those who have chosen to read this irreverent, but insightful and timely column that Hunter Yurachek was hired AFTER Chad Morris.  In other words, he’s not responsible for bringing in Morris who — now that he’s gone — we’re finding out more and more about his lack of communication, lack of “presence” and other lacks.

That’s all I’ll say about that because there’s no reason to kick a man when he’s down or beat a dead horse.  He’s a good guy and a good coach who will land somewhere and probably come back to beat us some day.

An old friend, Mark Meadors, reminded me yesterday that Yurachek “found” Musselman who hardly anybody had on their radar as a possible coach for the basketball Hogs.  Time will tell if it was truly a good hire and we’ve got a long way to go before we start comparing him to Coach K, but so far, so good.

So, as we go into this sunny and pleasantly cool weekend, the hope is that Yurachek will hit another (what appears to be) triple with the football coaching hire.

Remember the song “Radar Love” by Golden Ear Ring?  If you don’t, it’s okay because it has no relevance to this column, but I thought I’d just take you back a little bit.

As far as the coaching search goes, I don’t care if our prospective coach is on or off the radar.  We’re all just hoping to get back on the map in terms of college football relevance.  Our program hasn’t even been a blip on the college football radar since Bobby Petrino took us the Sugar Bowl.

Sure, we beat a mediocre Texas team in the Houston Bowl, or Texas Bowl, or whatever that was. I was there with my son and it was at a time when Texas thought the other team should forfeit as soon as the Horns laced up their shoes.  We crushed them because they didn’t show up.  Not long afterward, we went to the Belk Bowl and blew a 28-0 halftime lead. That was followed up with a 4-8 record the next year.

Combine Bret Bielema’s last year and Chad Morris’ 22 games and we’ve got 8 wins against 26 losses.  Kids, that is what we like to call “irrelevance.”  Total irrelevance.

ALL WE ARE SAYING:

In the modified lyrics of John Lennon, “All we are saaaaaaaayiiiiiiing…….is give the Hogs a chance…….”  We’ve got the facilities.  We’ve got the fan base.  We’ve got a sweet college town to live in.  Now let’s get a coach who can take the VW Bug engine out of the Porsche and truly hit the left lane — but not with Lane.

Get updates on the Hogs coaching search below. At 12:15 Trey Biddy talks about Sam Pittman as the kind of guy “I want to be my dad.”