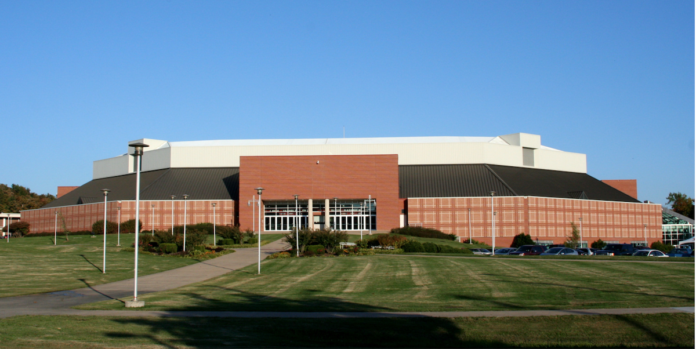 The Hogs men’s basketball team made their season debut under new coach Eric Musselman, delivering a dominant performance on November 5 with a 91-43 trouncing of the Rice Owls.

Guard Mason Jones (junior) pumped in a career-high 32 points, going 12 of 18 from the floor and 4 for 8 from beyond the three-point arc. Fellow guard Isaiah Joe drained 10 of 18 shots from the floor, including four 3-pointers en route to a 24 point performance.

Eric Musselman was an animated sideline presence throughout the game, keeping constant contact with his staff.

The Hogs looked good on defense forcing the Owls to turn over the ball 27 times. Meanwhile, Arkansas suffered 21 turnovers while outrebounding Rice 45-27.

Jones started the scoring for Arkansas with a pair of threes before the Owls went on an 8-0 run to take a short-lived early lead. An inside bucket from Sills and another 3-pointer from Jones put the Hogs back on top as the small lineup went to work containing Rice on defense.

Arkansas led 39-19 at the half, behind 17 points and six rebounds from Jones. The Hogs shot 16 of 33 from the field while holding the Owls to 8-of-25 from the field through the first half.

The Hogs posted a 10-2 run to begin the second half. The lead was extended to 37 points with 13 minutes remaining on a highlight reel dunk by forward Jeantal Cylla (graduate senior).

Arkansas squared away the decisive victory, shooting 21 of 34 from the field in the second half and 55 percent on the game.

Musselman divulged his attack plan and praised the Hogs squad post-game, stating “We’re trying to out-react people because we’re a little bit smaller, so that’s what we’re going to have to do…I thought the effort tonight was great.”

If Arkansas keeps the fiery momentum rolling after Rice, fans will see Musselman’s squad sitting well in NCAA basketball futures, in which fans are already placing their wagers on their favorites for both the SEC and a March Madness appearance. The Hogs’ last trip to the NCAA Tournament came in 2018.

Musselman’s debut was a strong showing for the coach, who landed in Fayetteville last April. It also serves as a glance into how fellow new faces will gel with the Arkansas program.

There’s a good reason why Whitt’s name rings a bell with Arkansas fans. He spent his freshman year in a Hogs uniform before transferring to SMU for his sophomore campaign. The 6-3 guard averaged 12.3 points, 6.4 rebounds, and 4.0 assists last year with the Mustangs.

Also joining the Hogs by way of transfer in 2019-20 is Jeantal Cylla.

Cylla offers the Hogs veteran leadership with three years of experience under his belt at UNC Wilmington and Florida Atlantic. The 6-7 sharpshooter has averaged 10.25 points and 3.78 rebounds over the course of his NCAA career.

Musselman also landed JD Notae, who will play next season after sitting out a year due to transfer rules. Voted second team ALL-ASUN in 2018-19 with Jacksonville, Notae will give Musselman a seasoned scoring weapon. He averaged 15.5 points (fifth in the ASUN), 5.5 boards, and 2.7 assists a season ago.

Two notable options once on the table won’t be appearing with the Hogs.

Former Iowa standout Isaiah Moss committed to Arkansas in May, but reversed course several weeks later when he announced his intention to land with Kansas.

Transfer guard Connor Vanover (sophomore) from Cal saw his playing hopes dashed just hours before the Rice game. The Little Rock native will be forced to sit out 2019-20 due to the NCAA denying his transfer waiver.