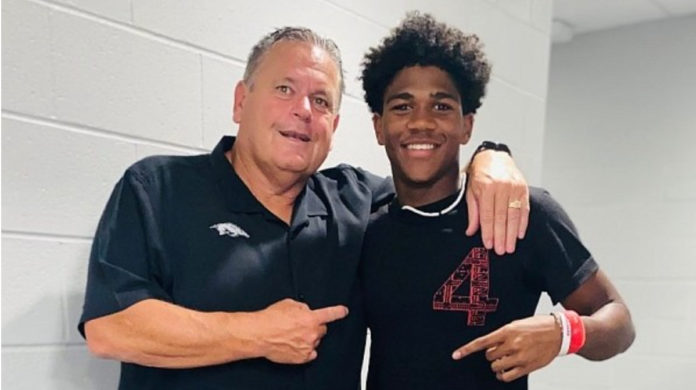 The class of 2022 is getting a majority of the attention from fans and scouts these days. Although the Arkansas football program showed out in the first two games of 2021, building SEC-quality depth will continue to be a concern for the Arkansas Razorbacks as they head into a harder portion of their schedule in 2021 and in the coming years.

Defensively, Arkansas is committed to recruiting SEC-level talent with Barry Odom as the defensive coordinator.

It’s a bonus for the Razorbacks that his role in the program has brought the team into the fertile recruiting grounds of Texas. Temple High School standout safety Naeten Mitchell is proof Arkansas is focused on recruiting Texas fiercely.  The standout Temple defensive back from the class of 2023 recently told Best of Arkansas Sports that he is locked in on the upcoming high school football season.

Before this season, Mitchell transferred into Temple from Manor High School. At Manor, Mitchell was an enforcer in the secondary. He racked up 47 tackles, 1 interception, and 1 tackle for loss. The young man is also a hard-hitter who can easily separate the ball from wide receivers.  Mitchell gives Temple a versatile player who can play at either safety or cornerback.

Although Mitchell is not currently ranked by any of the main recruiting services, that should change over the next few weeks when ranking updates take place. The Arkansas Razorbacks have been focusing on recruiting Mitchell, and he has already made two visits to Fayetteville over the summer.

Clearly, the importance of the secondary is not being overlooked by the Arkansas coaching staff. The Razorbacks are the first team to extend a scholarship offer to Mitchell, who has also drawn interest from BYU, Tulsa, Toledo, and Utah State.

There are many reasons why Arkansas is so intently focused on Mitchell, who also goes by Naeten Jeremy-Mitchell.

For starters, he is an impressive tackler. He doesn’t miss tackles and is consistently around the ball-carrier. As you can see below, he does a good job of being physical with opposing wide receivers and can make it extremely difficult for them to catch the football.

When asked which position that he would prefer to play, Mitchell told me that “I will play either safety position or move down and play the cornerback position. Wherever the team needs me to play, I will play.”

Similar to almost all quality players, Mitchell recognizes he has areas of his game he must improve during the season. He discussed the cornerback position and improving his press coverage technique against opposing wide receivers, one aspect of his game he said he would like to become more comfortable in. He said he expects to continue to improve his press coverage skills throughout the upcoming season.

Like all players at this point in the preseason process, Mitchell has team goals and individual goals that he would like to see accomplished this season. He’s an extremely unselfish player, so it came as no surprise that he addressed his team goals first in our conversation. For starters, he would like for Temple to win its district.

In Texas, winning the district championship helps determine the playoff seeding and it gives the district champions an easier road in the state playoffs. Winning district goes a long way to determining playoff position in the state of Texas. Mitchell’s second team goal is that he wants the team to make a playoff run and play in the University Interscholastic League State Championships.

The UIL acts in a similar fashion to the Arkansas Activities Association in the state of Arkansas.

Meanwhile, Mitchell has set realistic individual goals that he’s capable of achieving. Mitchell told me that when it comes to corner, “I want six interceptions and 30 tackles” before adding, “And from the safety position, I want 58 tackles.” Mitchell’s versatility is impressive. He has continued to improve his technique at both positions, and he will be ready to go at either position against Texas high school power Westlake. The most impressive attribute he brings to Temple is his work ethic — he continues to study film and he watches tape and YouTube to find new ways to improve.

When asked about recruiting and how the process is going, Mitchell was extremely enthusiastic. You can see that in the below tweet and retweet after the Arkansas vs Texas game:

“The Arkansas Razorbacks have been recruiting me real hard,” he said.

Mitchell would potentially given the Razorbacks another defensive back capable of delivering hard hits and making opposing wide receivers pay for catching the football. The Razorbacks are going to need playmakers in the secondary in the future, and Mitchell fits that description to a tee.

“It’s just a blessing that they invited me out to spend some time with me,” Mitchell told the Pig Trail Nation. “I had the chance to meet all of the coaches. When I first went, it was a little unofficial and I didn’t get to meet everybody. But yesterday I had the chance to meet everybody, all of the recruits, got to talk to some of the 22’s out there.”

By the time Mitchell graduates in 2023, the Arkansas Razorbacks will likely be looking to fill some holes in the secondary. Safety Jalen Catalon might be in the NFL and Myles Slusher will be nearing the end of his eligibility. Mitchell said one Razorback he particularly enjoys watching play is Catalon.

“He is a player that just goes full speed and delivers the hit hard,” said Mitchell.

Sharing Opinion on Oklahoma/Texas to SEC

The potential for immediate playing time will be there should Mitchell decide to commit to Arkansas. The secondary is a unit that must continue to improve, especially when considering how many explosive offenses the Razorbacks play against every season.

A discussion of speed in the SEC led us into a conversation about Oklahoma and Texas jumping ship from the Big 12.

The thought process for most fans when considering this topic is that Oklahoma will have little trouble adjusting to the style of play in SEC. Many fans around the SEC have thought that it will take a few years for the Longhorns to be competitive in the SEC. And Lord knows more fans than ever are thinking that way after Arkansas’ demolition of Week 2.

Texas may be more prey than predator for some of the perennial SEC powerhouse schools in the beginning until adjustments are made. Mitchell’s thoughts on the Sooners and Longhorns jumping ship were interesting, to say the least.

“The Oklahoma Sooners are not going to have much trouble, they play really fast as it is,” answered Mitchell when asked about Texas and Oklahoma moving into the conference. “The Longhorns on the other hand may take awhile to adjust to the speed of the conference and tough defense that is played in the SEC.”

Over the next year and a half, the recruitment of Mitchell is going to be worth watching. Given his versatility as a flexible defensive back capable of playing corner or safety, it has been encouraging to see Arkansas among the leaders of the pack recruiting him.

Mitchell said he has been impressed with the University of Arkansas after visiting campus twice over the summer. Part of the reason he has been a frequent visitor is Sam Pittman.

“Coach Pittman is a great communicator and an excellent head coach,” Mitchell said about Pittman.

Mitchell’s work ethic and determination to continue to improve will impress the Arkansas fan base as well as the coaching staff. The bottom line is the Razorbacks are in a great position with Mitchell and should continue to recruit the state of Texas aggressively.

Historically, Arkansas has pulled an impressive litany of safeties from Texas, including Tony Bua and Kenoy Kennedy, a pair of hard-hitting enforcer-type safeties. Recruiting Texas will make Pittman’s rebuild easier. And, with a little luck, a whole lot shorter.

In order for that to happen, Arkansas must win games and continue to recruit SEC-level level talent like Naeten Mitchell.