Search
Home Arkansas Football Perspective “I think Georgia Southern Will Go in There and Punch Them.” Eagles’... 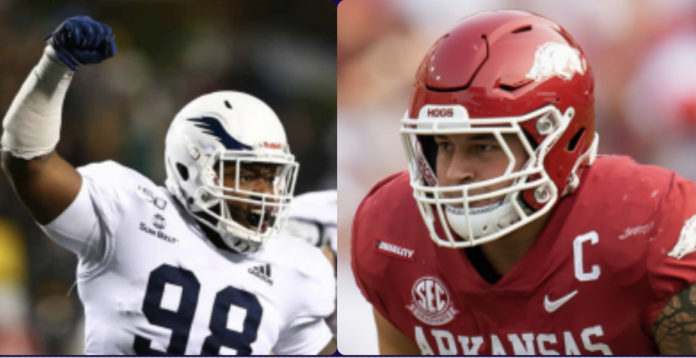 The Georgia Southern and Arkansas football programs are heading into Saturday afternoon’s game coming from two opposite sides on the competitive spectrum.

The Eagles are coming off of a 38-6 walloping at the hands of Florida Atlantic, one of their Sun Belt Conference foes.

Meanwhile, just about everybody’s high on the Hogs after No. 20 Arkansas scored its biggest win in five years by knocking off arch-rival Texas 41-20 at home in a win that put into doubt whether the Longhorns can handle their upcoming entry into the SEC.

Arkansas players are as confident as they have been in a while.

While it’s human nature to let down a little after such an emotional win, it would be a surprise if the Hogs came out flat — and remained flat — against Georgia Southern as they often did coming off of wins in the last couple years under Bret Bielema and the two years under Chad Morris.

Granted, the team lacked the focus that Arkansas football coach Sam Pittman wanted to see in Tuesday’s practice, but they bounced back strong on Wednesday.

Arkansas is a 23.5 point favorite for good reason.

Still, just a few months ago, some pundits (well, perhaps just one) felt like the Arkansas football team was ripe for an upset in this game.

“In regards to the quality of the opponents that Arkansas will lose to next season, this game will be their lowest point of the year.

“The Eagles of Georgia Southern have been one of the more competitive Group of Five teams in recent memory, and that is all it will take for them to top the Razorbacks in Arkansas.”

“It will not be a blowout, the Eagles will likely take it by no more than two scores, but it will hurt like crazy nonetheless. This is the last obstacle for the Razorbacks before they begin SEC play, and it will hint at a lot of what is left to come in what is remaining of their season.”

Granted, if the Hogs choose to look past Georgia Southern, then there’s no doubt they can get beaten — but so far in the Sam Pittman era the team has always risen to the challenge of maintaining focus for the next game.

Frank Sulkowski, the host for Georgia Southern’s pregame show, said that some Eagles fans were looking forward to an upset before the season.

“If Arkansas was what we knew of Arkansas in recent years, we would’ve felt more confident,” Sulkowski told Hawgbeat’s Andrew Hutchinson.

“There was actually a section of the fan base who said “Hey, this is a winnable game. If we’re playing well, we could go there'” and win.

But times have changed.

“Now you’re going up there, off of one of the biggest wins the program’s had in a long time. You’re nationally ranked. Everybody’s here,” Sulkowski said of the Arkansas football program.

“You’re going to have brand new goal posts. I’m sure there were a line of folks ready to pay the $100,000 fine for the fans throwing it on the field. So we’re expecting a raucous crowd.”

Still, Sulkowski, also the sports director for ABC affiliate WJCL 22 in Savannah, Georgia, thinks that Georgia Southern can do some damage despite all recent trends pointing to a rout.

Yes, the Georgia Southern football program is 1-13 all-time but Sulkowski finds solace in knowing that the Eagles were thoroughly browbeaten in only one of those games (the 2019 loss to eventual champion LSU).

“For the most part, though, when we have played SEC teams, we’ve hung well,” Sulkowski told Hutchinson. “We’ll exchange punches. A lot of these guys, they were recruited by the same schools.”

“A couple inches here and there, maybe a bench press or second difference in this, things could be different” on the recruiting front.

“I think Georgia Southern will go in there and punch them,” Sulkowski said. “This isn’t your run-of-the-mill cupcake team for the starters. Georgia Southern expects to beat everybody they play.”

For sure, he thinks the Eagles can beat the spread.

“If Southern plays their best game, there is a chance they’d win. I think they hang within that 20 points. I really do. I think, from what I’ve seen, Georgia Southern can hang with the likes of Arkansas.”

For Arkansas to keep on rolling, the Razorbacks need to scheme and execute well against Georgia Southern’s unusual triple-option offense.

“He made some pitches last year that so far this year the other quarterbacks either didn’t or aren’t comfortable doing,” Pittman said. “He’s truly going to take that offense, in my opinion, to a different level, because he has done it so much and I’m sure he’s been practicing.”

Tomlin’s a burner who reeled off a 55-yard run against West Virginia last season. But he’s not as fast as Arkansas backup quarterback Malik Hornsby, who ran a series of practice plays with the second-team offense against the first-team defense to help Arkansas prepare.

“He does make their offense go,” Arkansas safety Joe Foucha said of Tomlin. “He’s a guy that will pull it more. The other quarterback [Cam Ransom], he’d give it off more I feel like.

“As for the guys on the back end, it’s going to be about your eyes and discipline.”

“Make sure everyone is doing their job, filling the right gaps. That’s how we’re going to go about it, and that’s going to help us win the game, because they have a triple option. They do a lot of option throughout the game.”

The Arkansas linebackers are ready, too.

The triple option “is going to cause us to have to be very disciplined,” Bumper Pool said in a press conference this week. “It’s something we have to pride ourselves on this week in practice, everyone doing their job and honing in on their responsibilities.”

“I like to call it the equalizer offense,” Grant Morgan told the Buzz 103.7 FM. The triple option “gives a chance for any team, no matter what type of athletes you have, no matter how many of the guys you have, it’s an equalizer.”

Through the entire week, “we’ve been working on this.” As for team focus, “this is the only thing.”

How to Watch Arkansas vs Georgia Southern

RADIO Razorback Sports Network can be accessed through local FM and AM affiliates, via the Arkansas Razorbacks Gameday app, via the TuneIn app or on ArkansasRazorbacks.com.

TELEVISION The game will be televised by SEC Network and streamed on WatchESPN.com and the ESPN app (carrier login required). The SEC Network is available with a 7-Day Free Trial of fuboTV and can also be streamed on Hulu Live TV, DIRECTV STREAM, Sling TV, and YouTube TV.

Arkansas and Georgia Southern are meeting for the first time on the gridiron, and the Hogs are 20-1 all-time against the current alignment of the Sun Belt Conference.

Notes for Arkansas vs Georgia Southern

Through two games, the Razorback attack’s average of 289 rushing yards per game ranks ninth nationally and third in the SEC. The offense has scored eight of its nine touchdowns this year on the ground, tied for fifth nationally in rushing scores. (via Razorback Communications)

For more Arkansas vs Southern Georgia preview, see this: