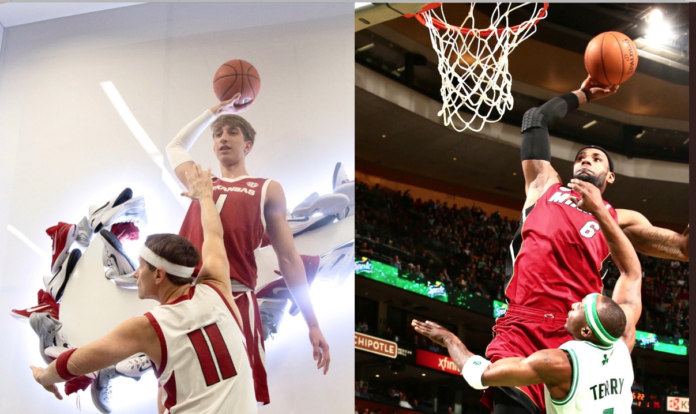 While awaiting to see how his full recruiting class gels on the court, Arkansas head coach Eric Musselman is still bearing down strong on future recruiting trail. With the recent hiring of assistant coach David Patrick, known as Australia’s best recruiter, Musselman and his staff are as active as ever building relationships with potential future Hogs.

One recruit in particular that Musselman and company have formed a strong relationship with is Joseph Pinion, a class of 2022 guard out of Morrilton, Ark. In a recent interview, Pinion spoke of being offered by the Hogs on April 14th: “It was a really good feeling, I was really excited. I’ve been waiting on this for a long time. I’ve wanted an offer from Arkansas and I finally got it.”

Kansas was the first Power 5 program to offer Pinion (on April 2nd), which is a clear indication of the kind of high potential the rising junior could have. Schools like DePaul (the Big East), Central Arkansas, Tulsa, and South Alabama have also offered Pinion.

*The last class with four in-state Hogs was the class of 2008, when Jason Henry, Michael Sanchez, Andre Clarke, and Nick Mason stepped on campus together. Over a span of five seasons, from 2012 to 2016, Arkansas totaled only four in-state recruits: Bobby Portis, Manny Watkins, Anton Beard and Trey Thompson.

The 6’6″ sharp shooter is a high-priority target for the Hogs in the 2022 class, and his numbers speak for themselves. As a sophomore, Pinion averaged 18 points, 7.9 rebounds, 1.3 assists, 1.6 steals, and 1.4 blocks per game. College scouts took notice.

Since Arkansas’ offer, other major programs like Baylor, Oklahoma, and TCU have fallen suit. Pinion noticed a common theme when speaking to recruiters. “They told me I’m a good, high-IQ player with a good shot,” Pinion said.

We tend to agree.

Pinion is a rangy guard/wing combo with tremendous shooting stroke. He can easily get his shot of over smaller defenders, regardless of attempts to contest it. His ball handling ability is fundamental, but not yet elite. He is capable of pulling down a rebound and leading a fast break, or setting up a jump shot with a strong dribble move, or shaking a defender with an initial move before a straight line drive to the hoop. Pinion is still improving on his ability to break down defenders off the bounce.

Relying on height to find shot opportunities is an attribute most easily compared to Kevin Durant. This comparison may seem over the top, but understand we are not stating that Pinion possesses the same skill level or potential that Durant has. This comparison is strictly drawn between styles of play and tendencies on the court relative to the caliber of defenders they regularly face.

Pinion doesn’t possess the same athleticism, length, or overall skillset that Durant does, but his confidence when rising up over smaller defenders provides a close comparison. Pinion can be seen pulling up from distance with a defender in his hip pocket around at the 0:29 mark here:

This is a move Durant uses often against much larger competition. Look at the shot Durant makes over outstretched defenders at the 0:37 mark here:

Again, this comparison is drawn from the tendency of both players to shoot, and often make, highly contested shots with great confidence.

A truer comparison to Durant can be found in the class of 2022’s No. 1 overall player, Emoni Bates. The Michigan State commit has drawn a lot of attention thanks to his unique combination of ball handling abilities, three point shooting, and a nearly 7’ frame. While Pinion doesn’t have the same height or range as Bates, similarities in play style are present.

Pinion and Durant also share similarities on on the defensive side of the ball. Durant is often underrated for his defensive abilities, but he is rightfully not labeled as a lockdown 1-on-1 defender. He has the length and IQ to be a pest in the passing lanes and a solid help-side shot blocker, traits that can also be found in Pinion’s game.

Like Durant, Pinion has not yet displayed a tremendous amount of 1-on-1 defense, but he is smart about his defensive positioning when blocking shots and intercepting passes. These help-defense capabilities can be seen in action at the 1:07 mark of Pinion’s highlight reel above.

Pinion’s heavy reliance on length and shooting is not that different from Isaiah Joe. It can become cliché to compare shooters to shooters, but both players stand around 6’5-6’6 and rely on their smooth jumper to open up other aspects of their game.

Pinion does not use his dribble moves to create driving lanes inside the 3-point arc, but instead to free himself up for open jump shots. This technique is one Hog fans are used to seeing from Isaiah Joe. Pinion can be seen executing a jab step, one dribble pull up to perfection at the 1:37 mark of his highlight video. Joe can be seen executing almost the exact same move around 2:12 mark here:

While neither player has a reputation for hard-nosed defense, they both find ways to contribute on that side of the ball with good help-side positioning. Joe does so primarily by taking charges under the rim. Pinion often tends to go for the blocked shot, but he has been highly effective in doing so at the high school level.

Standing at 6’6, Pinion needs to add to his 175-180 lbs frame before he’s ready to compete with SEC athletes. This lack of mass is something Joe overcame coming out of high school as well. Fortunately for Pinion, his defensive game and body mass have plenty of time to grow and develop as he progresses through high school and college.

Adjusting to the New Normal

The COVID-19 pandemic ended Pinion’s sophomore campaign at Morrilton early and has already caused the cancelation of many summer tournaments. However, the young guard is not overly worried about this affecting his future. Pinion’s stock has continued to rise amid the unique cancellations, as Rivals has ranked Pinion as a top 90 prospect in the nation and awarded him his fourth star. He also knows that he will have a couple more seasons and summers to perfect his craft before playing at the next level. “I learned that you have to keep working even through the tough times, and if you keep working coaches will find you,” Pinion said about the pandemic cancelling sporting events.

It’s clear this high upside prospect is high on the Hogs’ list. Arkansas is among the schools most aggressively recruiting Pinion. Pinion already took a visit there in November 2019, and the Hog coaches reach out to him nearly every single day. When asked about his relationship with Eric Musselman and other Arkansas coaches, Pinion says they spend their time “talking about my workouts, about me coming there. They want me there and say that I’d fit their playing style.”

Musselman has been relentless in his pursuit to bring in long, smart players that fit the brand of basketball he wants to play. Pinion’s length, confident shooting, and sky-high potential make him a perfect fit for Musselman’s system and the Razorbacks’ future.

For moreon Joseph Pinion’s recruitment and his thoughts on Arkansas, see this interview:

Contributor and Senior Writer for overtimeheroics.net