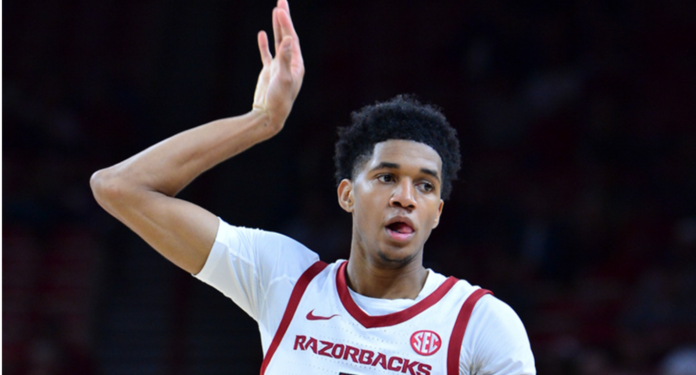 Earlier this summer, most signs seemed to point to Isaiah Joe returning to Arkansas to headline a loaded team in his junior year. For one, he never signed with an agent — which could have immediately ended his collegiate eligibility. Then, after months of training in his hometown of Fort Smith, in June he returned to campus for voluntary workouts.

At the same time, he was getting hammered in many mock NBA drafts. Most had him either going in the second round or not at all. Analysts were nitpicking the shooting guard’s game, calling him out for shooting only 5-36 (13.9%) in scoring situations off screens and his struggles when coming off curls.

One NBA scout said that if Joe were to leave, he’d be selected in the 30 to 40 range (high second round), but that he could play himself into a legit first round pick if he returned for another year of seasoning in college.

Since all that, the winds have definitely changed heading into the home stretch before August 3rd, the date by which Isaiah Joe must pull his name from the 2020 NBA Draft to keep college eligibility (The draft, normally held in June, is postponed to October 16 this year.)

There are more recent signs that seem to favor Joe leaving for the pros. Here are the top three:

Yes, Joe had a subpar sophomore season. But those who study his game and crunch the numbers look beyond the stretch in January and early February when he was most injured or recovering and still find a very intriguing prospect with more than elite shooting ability.

Then, this week, pro basketball analyst Ian Levy ranked Joe as the No. 18 overall pick. Levy considers him as a potentially great complementary player for Mavericks superstar Luka Doncic:

Last week was the first time since March that Eric Musselman and his staff got to work with the Razorback basketball team. Lots of unfamiliar sights greeted fans.

Some were pleasant, like soon-to-be star Moses Moody (Jersey #5) throwing down a sweet put-back dunk in the highlight reel below:

But one of the familiar faces that was noticeably absent belonged to Joe.

Joe sat out a week’s worth of team camp, which isn’t something he needs as much as the newer players, to focus on making a decision about whether to go pro or not.

“He’s got one foot on both sides of the fence, one is considering and weighing his options to return to Arkansas for senior season, the other foot in that NBA draft pool,” Hogs basketball Kevin McPherson said.

“I think it’s understandable for fans that are hungry for this team to get going. I mean, you’ve got a top five national high school recruiting class, you’ve got a top 10 transfer class with these three grad transfers, according to most of the college analysts. And so there’s a lot of excitement and of course, Isaiah Jones [would be], the centerpiece,” he continued.

“I don’t know that they’ve overreacting but, at the same time, I don’t think him him not being part of this so far — in terms of them getting back on the court with the coaches — suggests he’s leaving.”

All the same, you can be rest assured that Joe and his family are assessing the financial implications of going pro. Joe told me himself that he’s a finance guy who crunches the numbers. So it goes without saying that he well knows…

3. Even as a high second rounder, there’s mad bank to be made

Only draft picks going in the first round are guaranteed rookie contracts with guaranteed money.

But an increasingly high number of high second round picks negotiating and getting at least two years of guaranteed money in their rookie deals, as Hogville’s Kevin McPherson points out.

For instance, look at Daniel Gafford, who went as the eighth pick in the second round in the 2019 NBA Draft. He signed his rookie contract for about $6 million with guaranteed money in the middle of his productive run with the Bulls in the Las Vegas Summer League last July. Gafford also benefitted from the NBA Draft Combine before the draft.

Granted, Joe won’t have the benefit of going through the combine this season. Nor will he able to make an impression in summer league, since that’s been canceled. This is such an unusual season because if he chooses to stay, it’s possible that some of the college basketball season will be canceled on account of coronavirus pandemic. But if he leaves, and doesn’t get drafted, he may be in a position where playing abroad would be more dangerous than usual (on account of a flare-up of COVID-19). Whereas he would be closer to family and relative safety if he stays in Fayetteville during the pandemic.

It’s a waiting game — for Joe and fans alike.

Joe is still interviewing with NBA teams and is waiting on an underclassman advisory committee report that should arrive any day now.

Joe already received one report earlier in the draft process. The follow-up report will give him a firmer picture of where he’s projected to go in the draft, and a better idea of what current NBA personnel think of his strengths and weaknesses.

While these signs should make it no surprise if Joe does decide to go pro, there’s also cause for optimism.

“Let’s let him finish his process,” McPherson said. “I don’t know that he’s leaning either away. And I think there’s a strong chance he’s still comes back to Arkansas…. He could’ve spent stayed in Fort Smith — he has access to gyms — and just strictly worked on NBA stuff.”

“I think the fact that he came back [in June] says a lot about his intentions, that he really is considering returning to Arkansas. I don’t think we should take this as him shutting that down. We should take it as there’s only a few more days left in his process, and he’s gotta focus on that.”

Plus, there’s a very good reason why Joe may wait to announce his decision until the last moment.

“The SEC is waiting until at least the end of July to start making more concrete plans for the fall sport seasons, including football,” Rivals’ Curtis Wilkinson points out. ” The longer Joe waits, the more clarity he may be able to get on what the potential college basketball season could look like.”

“If the conference moves forward with plans for fall football, in any fashion, it is in the least an encouraging sign for college basketball. If football is postponed or pushed back to the spring, the forecast for basketball season becomes much more cloudy”

***
For a deep dive into Joe’s strengths and weaknesses, check this:

and for our latest basketball post, about a Morrilton High standout, go here: