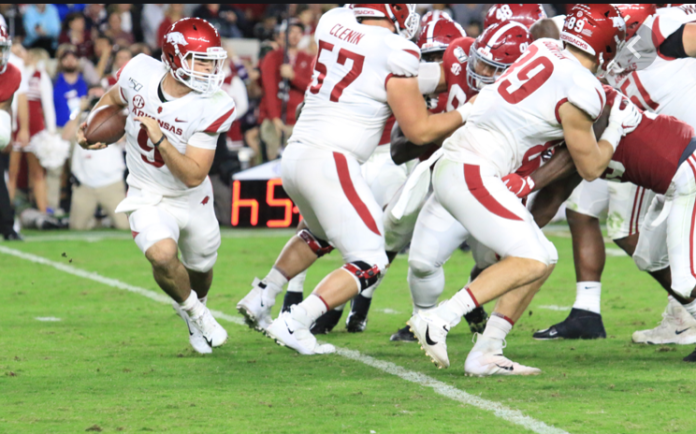 In the past decade, Razorback quarterbacks have not done well against Nick Saban’s Alabama Crimson Tide. Then again, with the exception of stars like Trevor Knight and Trevor Lawrence, most pocket passers also struggle against his defense.

In recent years, when playing for a non-powerhouse team, the necessary ingredient to beating Alabama has proven to be a high octane dual-threat quarterback. Texas A&M’s Johnny Manziel and Ole Miss’ Chad Kelly were both instrumental in knocking off the juggernaut.

John Stephen Jones didn’t lead the Hogs to a win. This 48-7 blowout loss to Alabama wasn’t even as close as the score. But he did help prevent the shutout by leading the Hogs into the endzone with a eight-yard touchdown pass to C.J. O’Grady. Plus, in completing six of seven passes, Jones did not consistently turn the ball over into the arms of the defenders.

“I did my tried to do my job to the best of my ability and my teammates helped me do that,” he said afterward.

Hogs coach Chad Morris added: “The moment was not too big for him. He’s an extremely tough young man, very smart and understands exactly what we’re asking him to do. I love his grit and I love his toughness and I’ve seen that. I’ve watched him in high school do that.”

Jones’ accuracy and smart play, relative to the aggravating inconsistency and accuracy from the older quarterbacks, is enough to give Hog fans a little hope.

Here’s a breakdown of what the redshirt freshman did compared to the more experienced Nick Starkel against Alabama:

This was a semi-breakout performance for Jones, the grandson of Jerry Jones who smashed records at Dallas’ Highland Park High, where Chad Morris’ son Chandler Morris plays now. Here’s some evidence of his amazing high school career:

This past week, Morris planned to use the 5’11 Jones to give Alabama a different look:

“Part of our plan through the course of the first half was to mix up some quarterback run game and that’s what we were doing. And, and just so happen as we were motioning the guys out of the backfield, they didn’t go out, so the throw was off of it.”

“That was all a part of the plan — bringing him in and out — giving us that dynamic without putting Treylon [Burks] back in there at quarterback as much. In the second half, we were going to go exclusive with John Stephen and see what he could do.”

Morris added that the coaches will reexamine who the starting quarterback will be going forward, and that Jones is now in the mix.

Here is some more post-game insight from John Stephen Jones:

On playing on the road against the No. 1 team:

“It was nice just to go out there and complete a pass. Especially in a Tuscaloosa. It was a lot of fun.” He added: “It’s always nice to get in the end zone, but we didn’t come out with the win, so it is what it is.”

On the possibility of being the starting quarterback in the next game against Mississippi State:

“I’m just going to put my head down and work, and whatever’s best for this team, that’s what [Morris] will do.”

“Hopefully, going in on Monday, the coaches will have a great game plan for us and we’ll put our heads down and go to work.”

And what about true freshman KJ Jefferson, Arkansas’ other dual-threat quarterback?

Morris said he “figures into part of our plan as we go” forward in the next four games.

It’s definitely time to see more of Jefferson as well as Jones.

Read more about Arkansas football in my latest post about how hot Chad Morris’ seat is getting: