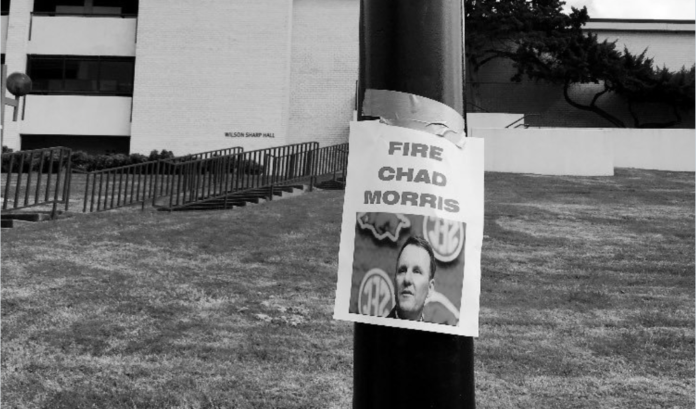 The late October 48-7 loss at Alabama was, to many Hog fans, predictable. Not so with last week’s 24-54 loss to lowly Mississippi, at home and on Homecoming, no less.

After the Alabama loss, in which dysfunction reigned supreme in nearly every aspect of play, Hogs head coach Chad Morris said: “We’ve got to go back and study why we’re making some bad decisions with the football. And that’s on us as coaches to figure that out.”

Yet another loss chalked off to mental mistakes and turnovers.

Sure, yes, Morris did put some of the responsibility for preventing these at the feet of the coaches. But why do they keep playing the same players who keep committing the same mistakes?

And, most importantly, why haven’t some of those mistakes been ironed out in the previous weeks?

The fact that these questions keep looming over the program, while the program keeps getting hammered in game after game and losing big-time commits, has led to many Razorback fans wanting Chad Morris fired less than two seasons into his tenure.

Then there’s the fact Florida State just fired its own coach, Willie Taggart, after Taggart achieved a much better record at FSU (9-17 overall, 6-9 in conference) than Morris has at the UA (4-17 overall, 0-14 in conference). The Seminoles’ impatience with subpar performance only adds fuel to the fire for those who want Morris canned.

Here’s some evidence of Razorback ire from the University of Arkansas campus two weeks ago:

?How hot is the Chad Morris’ seat??

Well a buddy of mine found this on campus.

After the Alabama game, about 88% of 470 fans on the major forum Hogville.net wanted to see Morris fired before a Seasons 3.

Losing so badly to Mississippi State means much this boiling sentiment will remain even if the Hogs’ new quarterbacks lead Arkansas to a win against Western Kentucky. There just isn’t much in the way of silver linings for Arkansas athletic director Hunter Yurachek, who hasn’t seen the improvement in the last month that he said was critical to gauging the football program’s success:

Best case scenario, Arkansas beats Western Kentucky and Missouri (they will lose to LSU, sorry). Just two to four wins in Season 2 would be inexcusable compared to the promises Morris made coming into the program:

“This will be one of the most explosive offenses in all of college football.” pic.twitter.com/9u7GqPfrPY

The question becomes: How realistic is letting Morris go?

The answer begins with a look at finances.

“Arkansas is going to have to pay Morris millions of dollars next year regardless of whether he’s coaching the Razorbacks or signed up as one of Nick Saban’s legion of analysts in Tuscaloosa,” cheekily writes John Talty of AL.com.

“The school can either pay him $4 million to coach next season or $10 million to leave, mitigated down by any future salary he gets from another school. That $6 million difference isn’t an insignificant amount of money, but is a short-term saving of $6 million worth another winless SEC season? Morris could go down as the worst coach in SEC history if he gets a third season to rack up more losses. Even Robbie Caldwell (Vanderbilt) and Derek Dooley (Tennessee) were at least able to get an SEC win.”

Talty then asks: “Will it look bad to pay three coaches (Bielema, Morris and new hire) at the same time? Absolutely…. Arkansas might have to pay a new coach more than Morris’ $4 million annual salary which adds fiscal strain to the school’s athletic department.”

There are other major questions for Yurachek to ponder if and when he fires Morris in the coming weeks. Pig Trail Nation O.G. analyst Mike Irwin lays them:

Irwin, as usual, serves up great insight from his decades of covering the Razorbacks since the 1970s. Watch his latest hot take-a-thon here:

What is Chad Morris’ Buyout Situation?

Below is Chad Morris’ buyout clause and situation, as reported by Andrew Doughty of HeroSports.com:

That $10 million price tag is formidable, and the common wisdom for a long time was that it would be impossible if paid on top of the buyout that Arkansas is already paying former Razorback coach Bret Bielema.

It was widely assembly that Arkansas would have to keep paying Bielema $320,000 a month through the end of 2020. However, it turns out, the UA athletic department stopped paying Bielema in December 2018.

Because of Bielema’s job status with the New England Patriots, Arkansas feels like it’s off the hook in paying the Bielema the $7 million he feels like he is owed. Bielema, naturally, disagrees.

And it looks he could be heading to court soon to get his money.

The guess here is that such litigation would end with Arkansas would still end up shelling some millions out to Bielema, just not as $7 million plus.

While the Hogs could “save” that money, the program must also seriously assess the cost-benefit of keeping Morris on board if he goes into Season 3 with just four or five total wins in his Hogs career. At this point, the Hogs are losing “more than $1 million worth of tickets” with each sparsely attended game, and losses in merchandise and concessions (as well as the multiplier effect on NWA hotels and restaurants) must also be considered.

At what point does Arkansas just need to cut its losses and start anew?

With the Hogs performing at this rate, the majority of Hog fans believe the sooner the better.

More from Chad Morris after the Alabama loss:

On quarterback John Stephen Jones’ performance: It was a spark. Allowed us to get into some of our zone read game, and did some really good things. The moment was not too big for him. I thought he did some really good things, and just his spark, his confidence on the sidelines, and when he would step into the huddle with those guys, I was very proud of the way he responded tonight.

“I’m pleased with the way Sam punted the ball tonight. Our plan was to try and get the ball up and worry more about sky and the height of the punt more than the distance of the punt, to try to keep it,off the return man. I thought we did some good things in that regard. There were some good things, but too many mistakes against too good of an opponent.”

“It’s about getting into the month of November and just getting better. I mean, that’s, really where we’re at. We’re on to Mississippi State right now. These guys will be back in there and we’re going to get back together and work on getting better.”

Read more about the possibility of Jones starting the next game below: