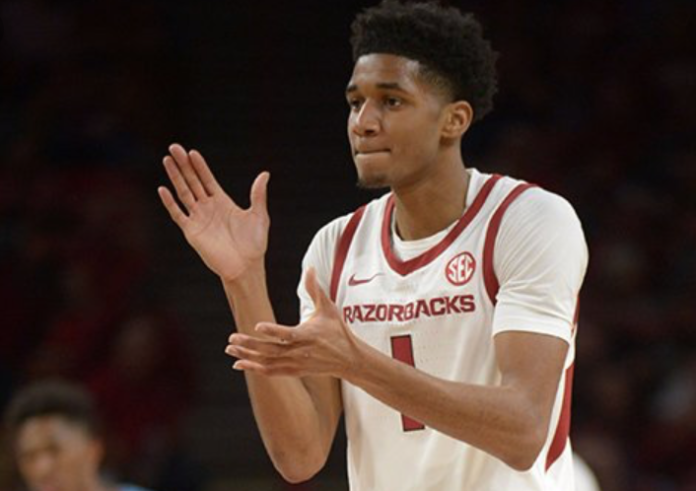 The 2019-2020 college basketball season will be packed with its usual slate of one-and-dones who will be no-brainer NBA Draft lottery picks for anybody who’s tracking such projections by reviewing a site like Betonline.

But among the returning student-athletes a few stand out more than the rest.

Of the thousands of returning college players, however, Razorback Isaiah Joe makes a very strong case as one of the top three. Basketball analyst Cole Swicker lays out the reasons why in what is the most awesomely comprehensive pre-draft analysis I have ever seen on any Razorback athlete, regardless of sport.

Swicker, a lawyer and former NBA team consultant, has essentially written the Bible on Isaiah Joe. This week, he joined The Athletic’s Sam Vecenie, one of the world’s most respected draft analysts, to further break down Joe, a pre-season All-SEC selection who last season set the SEC record for three-pointers made per game by a freshman (3.32 per game). On top of that, Joe was the only high major player in college basketball last season to take at least 60 shots off the dribble and make them at a 1.2 point per possession clip.

“Isaiah Joe is just the absolute most fun player in college basketball that like 20 percent of college basketball fans actually know who the **** he is,” said Vencenie, who previously wrote for CBS Sports.
“He is just a monster shooter. He is ridiculous in every regard as a shooter.”

Swicker then noted on Vencenie’s podcast that Joe is one of only three freshmen to ever shoot over 40% from three-point range while also attempting at least 10 three-point attempts per 40 minutes, adjusted for pace.

Steph Curry, the two-time NBA MVP, and Jamal Murray, the young Denver Nuggets star. Shooting at this level is a really good indicator of NBA success.

Vencenie notes that Joe should make more than the average sophomore jump because he’s now playing in a system that better suits him.

“I think [Eric] Musselman getting there is only going to help, because the level to which Eric is a better coach as an offensive mind than Mike Anderson. As we saw last year as Mike Anderson ran post up after post up for Daniel Gafford, it’s immeasurable. I think they’re going to get him a bunch of shots and I am excited for him to average 20 points this year.”

Joe already flashed his potential for the 2019-2020 season in preseason-opening exhibit win over UALR. He made 8 of 17 three-pointers for 25 points, plus showed an uncanny knack for taking charges early on:

In 2019-2020, expect Joe to flash a lot more shot diversity as well. First off, he’s put on 10 pounds of muscle from last year, which should help him drive to the basket a bit more. “He could not drive last year,” Zwicker said. “And I think that was more of a issue with his strength level, just not being able to beat initial contact. Not an elite level driver by any means. He’s not even a good one as far as that goes. As far as aggression, he’s mostly looking to shoot, but I want to see how much the strength level functioning plays into his game.”

Getting to the rim more will help Joe earn more free throw attempts. Expect him to improve his 75% free throw shooting from last year. “You look back and pre-college stats and he was like almost 50% on threes on like 170 attempts in AAU,” Swicker said. “He was like a high 89% free throw shooter his senior year.”

Zwicker also pointed two specific instances from Isaiah Joe’s freshmen season which have made him a “sleeper” hit among NBA Draft and college basketball analysts:

“He literally put [Tyler] Herro’s ass on the bench against Kentucky, because Herro could not stay with him off the ball. And he hit that one step back three in Herro’s face that was just caused John Calipari to yank him.”

“I think the most underrated part of his game is he’s legitimately a smart basketball player. I broke this down against Indiana on the NIT. He made like 14 winning plays in that game and you just rarely see such a concentrated dose like that from a freshman.”

Make sure to listen to the entire conversation on Vencenie’s Game Theory Podcast here:

Below are some of the main points that Swicker made about Joe, mixed with my own perspective. The below analysis originally published on August 9, 2019.

It should be noted that criteria for what makes up the “top 3” hinges on the player’s potential pro prospects. So, saying Isaiah Joe is a top three returning player isn’t the same as saying he should make an All-American team (thought it will be a disappointment if he doesn’t make All-SEC).

It’s saying he has a strong chance to make a bigger splash in the NBA than almost any other collegiate sophomore, junior or senior.

Before getting into the 6-5 guard’s considerable upside, let’s look at the Fort Smith native’s weaknesses as a freshman. These are the reasons Joe is missing from more than half of the current 2020 NBA mock drafts — and only placed in the first round in two of them.

For starters, he struggles at times staying in front of his man on defense. “He doesn’t seem like a natural mirroring the offense player’s moves changing directions and beating guys to spots,” Zwicker notes. We see this bear out in how Joe can sometimes play flat and not move his hips quickly enough when defending ball screens.

That’s correctable, though, and fast-twitch muscles can be developed with enough plyometrics training (a big reason Kyle Korver became an All-Star at age 33). While Joe does show good lateral quickness in guarding point guards, he lacks the strength to hold his position down low when guarding on switches and can occasionally get blown off his position when a powerful guard goes at him.

League him! Arkansas sophomore-to-be Isaiah Joe @Isaiah_joe10 looks big and U know his shot is super-sized … goal was to make 20 in a row from 3, so he went ahead and cashed in a wet 23 straight! So, what’d U do with your Saturday?! pic.twitter.com/AU2oP4m9da

Getting up to even 180 pounds for his sophomore season will make a big difference in Joe’s effectiveness. There will likely be a domino effect, too, in Joe’s dribbling ability. Right now, he’s prone to over dribbling without cutting authoritatively to the hoop. Added strength and explosiveness should help streamline his decision, and cut down on turnovers due to over dribbling at the top of the arc.

With the confidence to cut to the hoop more powerfully, his mid-range game should also improve. Joe missed all seven of his runner attempts in his freshman season, but it’s a safe bet he’ll shoot quite a few more in his sophomore season as he will drive more often.

Now let’s dive into the positives of Isaiah Joe’s game:

The most famous book ever centered on Joe’s hometown was True Grit, a story about a deputy working for “Hanging Judge” Parker of the town’s frontier days. The movie adaption got John Wayne an Oscar for best actor:

So perhaps it’s only fitting that Isaiah Joe’s top qualities is his grittiness.

It was especially obvious this past season as battled against players who had 30-70 pounds on him. “Joe has a toughness in his approach that you often don’t find in smaller or frailer players,” Zwicker writes. “He’ll mix it up with bigger players and really fight, which bodes well for the idea of him in the future if he’s able to add passable girth.”

The Hogs loss at Tennessee provides one of the best pieces of evidence for this. Zwicker shows a clip of the 240-pound Volunteer Grant Williams driving on Joe, while Joe doesn’t cede an inch. Risking getting his teeth knocked out by a Grant’s granite elbow, Joe forces an awkward shot attempt from Williams that misses.