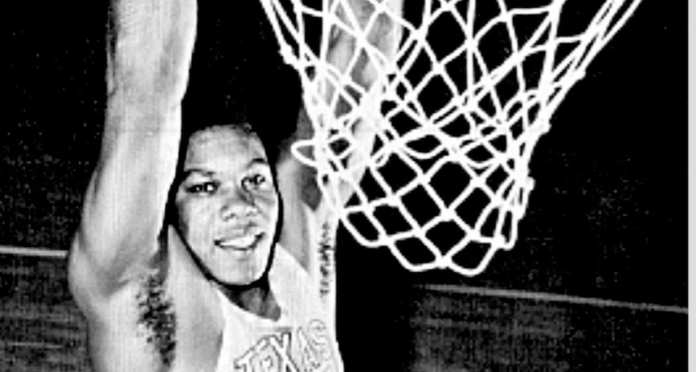 Legendary Texas-El Paso Coach Don Haskins was at a small high school in Headley, Okla., when he first heard about Jim “Bad News” Barnes. Barnes was a junior at Stillwater (Okla.) High School and his team was facing mighty Pampa, Texas, which had won a number of state titles in a row, Haskins said.

“I heard the score was 94-40,” Haskins said. “I figured Stillwater had met its match. I could-n’t believe it when they told me Stillwater had won. That was long before I knew I’d be recruiting him.” Three years later, Jim Barnes put Haskins’ Texas Western program on the map. The Tuckerman native then starred on the 1964 U.S. Olympic gold medal basketball team before being selected as the No. 1 pick in the 1964 NBA Draft by the New York Knicks. “There’s not been another No. 1 pick from Arkansas,” said former Arkansas Razorbacks Coach Nolan Richardson, a teammate of Barnes at Texas Western. [Au contraire, Nolan. There has been another—Joe Barry Carroll.] “He has to be one of the best to ever come out of the state.”

Recruitment of Jim Barnes, now 61, began much earlier than college. Barnes, who has suffered three strokes and three heart attacks in the past few years, doesn’t remember the exact dates he played at each school, but he is fairly certain he started playing varsity basketball in seventh grade at his hometown black high school in Tuckerman. His journey to basketball stardom began even before that.

Barnes was always the tallest student in his class, said McKinley Newton, former Tuckerman principal. His height might have come from his mother’s side, where his grandfather was 7 feet tall. But hoop dreams were not always Barnes’ aspiration, despite his height. “I was in love with baseball because that was the only sport I knew about,” said Barnes, who lives in Washington.

“Bernice Newton was the cornerstone behind me learning to love basketball. During recess, she made sure we had the semblance of a basketball in our hands.” Barnes learned the game fast, but not as fast as his body was growing, Newton said. “His feet were always getting tangled up,” Newton said. At 13, Barnes was an imposing 6-6 giant, who looked and played like someone much older, Newton said. Barnes helped Tuckerman upset rival Branch High School of Newport, which had dominated the series before Barnes arrived.

His family was so poor and his feet so large that Barnes couldn’t afford shoes for his size 13 feet and played in his socks. Branch Coach Norman Calhoun used this to his ad-vantage to get Barnes to transfer to his school. “He told my mother that he would make sure I had shoes and was fed,” Jim Barnes said. “I had never had a pair of basketball shoes before that.” Off he went to Branch High School, which was 12 miles away. By this time, Barnes was either in eighth or ninth grade, and he had grown to 6-7. “Teammates called me ‘Big Stoop’ because I had stoop over so I didn’t hit my head,” Barnes said. “Others called me ‘High Pockets’ because my rear end was so big.”

Barnes helped Newport finish third in the 1957 black state basketball tournament behind North Little Rock [Scipio] Jones and Merrill High School of Pine Bluff. He made the all-tournament team as a freshman. “He was moved up to varsity because of his size and ability,” said Richard “Deer” Smith, who graduated in 1957 and later played basketball at Arkansas Baptist College. “Newport always had an abundance of athletes, so Jim developed his skills from his surroundings.” The next year Barnes was on the move again; this time to an integrated school in Poplar Bluff, Mo., a team Branch defeated the previous year. Barnes caught the eye of the Poplar Bluff coach. “The coach told people I had [to] come there because I was his cousin,” Barnes said.

“Of course, we weren’t related.” Several complaints to the commissioner of the Missouri State High School Activities Association led to an investigation, and Barnes was ruled ineligible. “He told me not to return until I was ready for the pros,” Jim Barnes said. “I was dejected and returned to Tuckerman.”

This is Part 1 of an article entitled “Jim ‘Bad News’ Barnes: ‘Bad News’ stopped the presses” which originally published in the Arkansas Democrat-Gazette’s Untold Stories: Black Sports Heroes Before Integration. Read Part 2 here. Sadly, this wonderful, valuable piece of public history is out of print and will not be re-published unless sufficient demand is proven, I’ve been told by Democrat-Gazette brass.

But I wrote my own non-fiction collection of stories from Arkansas’ past and interviewed many athletes from the 1950s through 1970s for it. Learn more about African-American Athletes in Arkansas by clicking  on the book cover below: