In the early 20th century, it appears demand from the all-white communities of Benton and Carroll counties for black baseball was higher than expected. In 1932, for instance, the Muskogee Hustlers, a black team out of Oklahoma, was slated to play a Gentry team made up of local talent.

According to the September 29, 1932 edition Gentry’s Journal-Advance, the local boys included “Clyde Glass and Hawn of the Southern League, Browning and Berry of Des Moines [what the what?!], perhaps Pea Ridge Day, and other players of the Western and other leagues.”

Then, three years later, two black teams were scheduled to play in the Carroll County town of Green Forest. This time it was to be the big-league Kansas City Monarchs, a perennial championship contender in the Negro leagues, versus Muskogee again. Unfortunately, the idea of the Monarchs playing in lil’-ole Green Forest was simply too good to be true, as the below report from the September 10, 1935 Green Forest Tribune shows:

The Green Forest Champs beat the Muskogee Hustlers in a free[wheeling?] affair played on a soft field Monday afternoon. The Hustlers go 12 hits to 11 for the Champs, but the Champs made [theirs] good for 8 runs while the Hustlers counted 7. Coxsey pitched for the locals…except for four unearned runs in the first inning, was [invincible?] until the eighth when a…tally was pushed over. In the ninth the Hustlers added two more. The locals kept pecking at at Ousley and Gains to score persistently, once in the first, twice in the second, once in the third, twice in the fifth and again twice in the ninth, every run being earned.

The locals were playing the scheduled game to have been played between the Hustlers and the Kansas City Monarchs. The team which showed up to play Sunday was shown to be a fake. However, they were allowed to play Sunday to avoid totally disappointing the largest crowd that gathered expectation of seeing the genuine Kansas City Monarchs perform. It may be [said?] in all fairness, that neither the Muskogee manager nor the local manager knew a fake team was to play here until just before the scheduled game Sunday. It seems as the though the manager of the fake Monarchs had misrepresented his team. 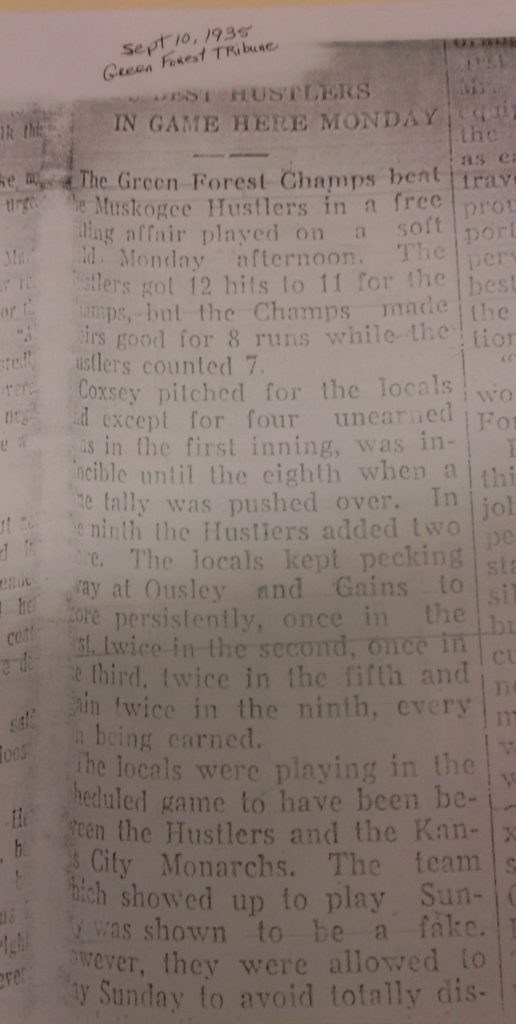 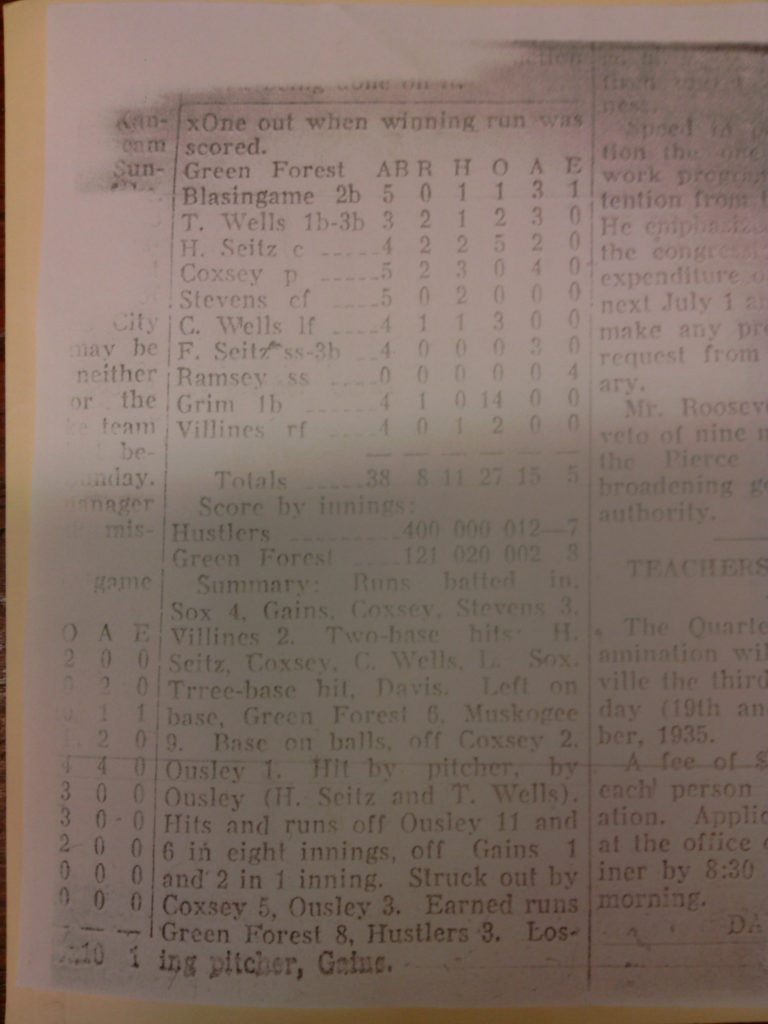 I don’t know of any first-hand accounts of Muskogee Hustlers playing in these towns, but we do have 2013 testimony from Porter Reed, a former Hustler, that later in the 1930s and 1940s playing in Arkansas was not a pleasant experience.

“I’d go down in Arkansas  and play [location unknown, as the Hustlers also played in bigger towns like Ft. Smith, too] and say ‘My name’s Porter Reed. That’s my name’” Reed said at the 5:05 mark below. “But I wasn’t Porter Reed when I went to Arkansas. I was ‘nigger.’ But didn’t make no difference—I was down there making good money.”

This evokes another testimony from black Oklahoman baseball player Eugene Golden, according to a thesis of Oklahoma baseball historian Jake Cornwell:

“Golden says that during a road trip in 1947 to Rogers and Siloam Springs, a young boy in Rogers, no more than five or six years old, pointed to Clearview old-timer Whitson Weaver who often traveled with the Rockets. The child tugged on his father’s pant leg and motioned toward Weaver exclaiming, “Daddy, Daddy, Daddy, that is a old nigger there! He’s older than Abraham Lincoln!”

Want to learn more about Arkansas ties to the Muskogee Hustlers should sign up for my upcoming book, African-American Athletes in Arkansas. I delve into story of Louis McGill, a former Hustler and Fort Smith native, and his ball-playing travels into the bootleggin’ hills of Washington County. 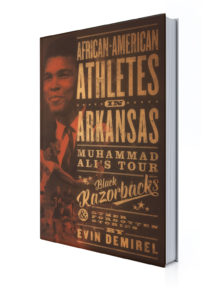 Add your email address here to reserve a copy of this nearly 200-page, one-of-a-kind collectible now.