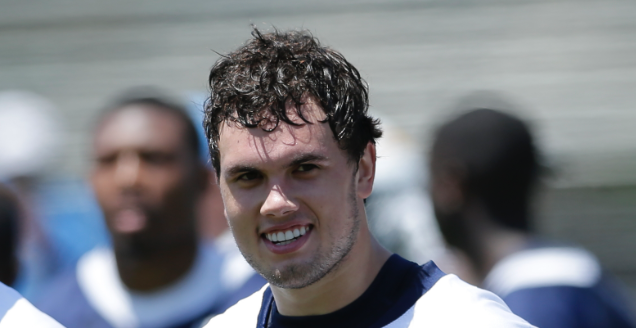 Hunter Henry is back.

Come Sunday, he’ll be ready to rumble after more than a year on the sidelines.

In his first two NFL seasons, the former Razorback superstar joined the upper pantheon of tight ends in the league. The 6’5″ San Diego Charger racked up  81 career receptions for 1,057 yards and 12 touchdowns. In 2017, Pro Football Focus graded him as the NFL’s second-best tight end, behind only Rob Gronkowski.

An ACL tear in May took Hunter Henry out of the 2018 regular season, and for months it seemed he wouldn’t return in the playoffs. That changed this week.

He’s been cleared to practice with the 12-4 Chargers ahead of their Wild Card matchup with Baltimore. “We want to give him a good look this week to see where he’s at,” Chargers coach Anthony Lynn said. “I like the progress that he’s been making. But he hasn’t played football in a long time. … He’s going to have to really show us that he’s ready.”

A healthy Hunter Henry is a dynamic option, especially on third downs. San Diego could definitely use his presence, as the Los Angeles Times’ Jeff Miller notes:

“The Chargers have struggled particularly in trying to sustain drives, picking up more than two first downs on only three of those 24 series.
Against a Ravens team that loves to hog the ball on offense and pressure the quarterback on defense, the ability to prolong drives figures to be paramount.
The Chargers converted only four of 13 third downs against Baltimore in a 22-10 loss at StubHub Center on Dec. 22. (They are eight of 24 over the last two games.)
During the regular season, they finished 16th in the NFL with a third-down conversion rate of 40%. The Ravens defense ended up third, allowing opponents a 34% success rate.”

In the last couple years, Henry still made waves back in Arkansas.

Below is some archival footage that some NFL players would want burned. Henry, though, embraces these times like a football thrown on a rope across the middle of the field:

Henry has retained a flair for the dramatic since those heady high school days. In fact, Hunter recruited the help of sports talk host Bo Mattingly to stage a proposal to his longtime girlfriend Parker Schmidly:

The couple got married in June, 2018 in Little Rock. They cut this most awesome cake:

In those Pulaski Academy days, Hunter Henry was rated among the top tight ends in the nation. His brother, Hudson Henry, has followed suit at Pulaski Academy.

Hudson, a high four-star senior, is committed to the Razorbacks. It’s assumed he will sign on National Signing Day in February. There has been some social media speculation in recent days that he’s considering signing with Stanford instead, but no recruiting analyst has given credence to these rumors.

Hudson himself pinned a Tweet in which he states he’s “100% COMMITTED” on his feed.

He also Retweeted a recent video by Razorback commentator TyZilla in which TyZilla reiterates the above and flatly states he’s not going to Stanford. [See 2:27 marker]