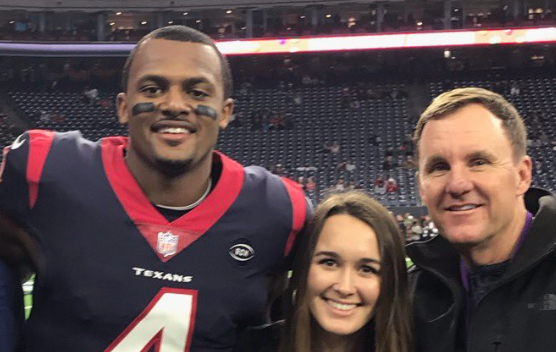 Here’s a sampling of them:

He also just led his Houston Texans to an AFC South title while proving he’s one of the toughest quarterbacks in the world. Watson is only the second quarterback in the Super Bowl era to sustain 62 sacks and make the playoffs (the Jets’ Ken O’Brien was first in 1985).

Chad Morris, Watson’s former coach, and the Morris family met up with the star quarterback in Houston on Sunday. Even though Morris now coaches Arkansas, their ties are still strong:

“He’s constantly in contact with me, he talks to Paula more than he does me. He talks to my two kids. He’s like an older brother to my two kids. He’s the type of kid your daughter brings home and says she wants to spend the rest of her life with a guy like him. Man, you would embrace that every day. He’s that special of a person.”

Chad Morris on Deshaun Watson, via the Jim Rome Show

Watson returns the love: “Chad Morris has had a huge impact on my life. I still talk to him to this day. He’s like a father figure for me.”

Clemson has built one of the two best college football programs in the nation. It’s fueled by the high-octane offensive system Chad Morris launched after his arrival there in 2010. The Tigers’ newest quarterback sensation, Trevor Lawrence, likely would not have signed with Clemson had its coaches not developed Watson the way they did.

“Clemson wouldn’t be where it is today without Watson, the most irreplaceable piece behind the Tigers’ chase for the national championship,” USA Today’s Paul Myerburg wrote in 2016. “And Watson wouldn’t be at Clemson if not for Morris, who spent four seasons transforming the Tigers’ offense into one of the nation’s best before becoming the head coach at SMU.”

“That personal relationship he developed with Deshaun, that trust,” said co-offensive coordinator Jeff Scott, “I think was one of the most pivotal pieces to Deshaun’s recruitment and why he stayed solid.”

Indeed, Chad Morris spent an entire year recruiting Deshaun Watson as a sophomore in high school. Watson gave a verbal commitment, and then Morris had to spend two years fending off rival schools who wanted to poach Watson away.

After leaving Clemson in 2014, Chad Morris went a few years at SMU without signing a dual-threat dynamo anywhere near the same caliber of Watson (or his successor Kelly Bryant). But that’s changed with Arkansas signee KJ Jefferson, a 6’3″ quarterback out of Mississippi.

Compared to Watson, Jefferson was more of a late bloomer. His recruiting rank stock did not boom until after his junior year, but when it did, it soared 215 spots in a matter of months. Toward the end, the likes of Georgia, Baylor and Kentucky swooped in and offered Jefferson full ride scholarships.

But he had given his word to the Razorbacks in spring 2018, and he stood by it. It mattered to Jefferson that Morris already had a track record in developing dual-threat quarterbacks in Watson and Watson’s predecessor Tajh Boyd.

It mattered a lot that Morris had seen similar potential in Jefferson even when he was ranked “only” as a three-star recruit. Morris wanted him so badly that he took the entire offensive coaching staff to Jefferson’s hometown for a visit in early February. Arkansas had offered him on January 21st, the first major program to do so.

In the end, Jefferson showed the same loyalty to Morris that Morris had shown him. As he Tweets below, he considers the Watson and Morris family to be family, just as Watson did before.

Things get especially interesting when you consider that Chad Morris’ son (to Watson’s right) is a recruited quarterback in his own right.

Chandler Morris, ranked by 247 as a three-star prospect in the class of 2020, has offers from the likes of Auburn, Clemson, Colorado and, of course, Arkansas. Is he a shoe-in to play for his dad? If Jefferson burst onto the scene as the star he’s expected to become, how much will the likelihood he won’t get major minutes early in his career matter?

Slowly, Arkansas is getting back to the point where the biggest issues come from too many talented prospects. After these last few years, that’s a welcome change.

Want to keep up with the latest from BestOfArkansasSports.com? Like us below!