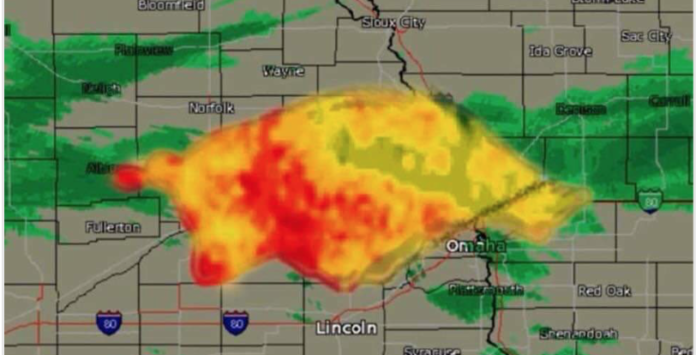 One of the most popular memes heading into this weekend’s College World Series is a Doppler weather-effect Hogs baseball storm looming over Omaha, Neb., ready to let loose on the rest of the field.

Just how potent, though, is this “storm”?

Good enough, many college baseball insiders agree, to predict Arkansas will return to the championship series — just as the Hogs did in 2018. The Razorbacks start play this weekend as part of a four-team bracket in which it is clearly the most explosive offensive team.

As Wayne McGahee, the Seminoles baseball beat writer for the Tallahassee Democrat points out, “Arkansas is the most talented team on this side of the College World Series bracket. The Razorbacks have a true ace on their staff and they’re one of the best hitting teams in college baseball. Only Vanderbilt (93) has more homeruns than Arkansas among teams that are still playing.”

“I actually feel like Arkansas’s line up this year is a little more versatile than last year’s line up,” D1baseball.com’s Kendall Rogers recently said on a podcast. Rogers explained why he thinks the 2019 Hogs baseball team has reached offensive “juggernaut” status.

“We don’t need to rehash Heston Kjerstad, Dom Fletcher, Casey Martin,” he said. “We all knew those guys were going to be good, but how about Jack Kenley?”

Indeed, few if any Hog baseball players have ever improved as much from their first three seasons to their last season like Kenley, whose production has shot up exponentially this spring.

Consider Kenley, who’s batting .309 this season, had a total of 29 hits and 23 RBIs in his first three seasons altogether. This season alone, he has 73 hits and 53 RBIs.

Rogers continued: “Then you look at Trevor Ezell, the [Southeast Missouri State] transfer, he was a highly productive guy at SEMO, but how would he make that transition? He’s been just a rock for that line up and then Matt Goodheart, the San Jacinto transfer, he’s been really good.”

The Hogs baseball players also have the advantage of arguably having the most motivation of any team in the College World Series. Their only contender in this department is their opening opponent on Saturday night, Florida State.

The Seminoles’ head coach, Mike Martin, is the winningest coach in college baseball season. But after 40 years at the helm, he’s retiring after this season. This is the last chance for him to win a national championship after losing in two NCAA championship series and going 21-32 in the College World Series during his tenure. His players will play with extra passion for him, no doubt.

This extra incentive has turned Florida State into what may be the nation’s hottest team this postseason, as McGahee points out in the Tallahassee Democrat:

“The Seminoles are one of two teams (No. 6 National Seed Mississippi State) to sweep through the regional and super regional rounds. FSU is the only team to do it on the road. The Seminoles are playing their best baseball of the season with the pitching staff and the lineup playing well at the same time for the first time all season.”

That Seminoles pitching includes a left-hander in Drew Parrish (8-5 record, 5.11 ERA, 86.1 IP, 116 K, 30 BB). Those aren’t great numbers, but “crafty” left-handers have sometimes proven to be an Achilles Heel in this Arkansas’ offense this season.

They have at times struggled against such pitchers, most recently against Texas A&M.

Hog beat reporter Andrew Hutchinson of HawgSports.com goes into depth on this potential issues at the 18:40 mark here:

Another potential issue that may prevent Arkansas from sweeping away its opponents with the fury of a thousand inland tsunamis is its own pitching. Ace Isaiah Campbell has been a rock, and can be expected to perform well in the opener.

But the other two starting pitchers have been more erratic, and it’s unknown how they will respond to playing on the biggest stage of their lives.

In the Super Regionals, “Connor Noland really struggled,” Rogers said. “I don’t think he got out of the first inning, if I’m not mistaken, against Old Miss. For those guys to win the national championship — we all love Isaiah Campbell and we all really like that bullpen — but those two guys have got to step up. I have them playing Vandy for the national championship, but I’m still concerned about those two freshman on this stage against these teams.”

Another advantage playing in Arkansas’ favor in this bracket, however, is the fact its freshmen have already competed against top teams in the nation’s best conference. That SEC competition, which is reflect in the numbers below, give them major confidence as prepare to take Omaha by storm.

*The rating percentage index is a metric used to rank sports teams based on a team’s wins and losses and its strength of schedule.

After locking up the top-eight seed for the NCAA Tournament, the Razorbacks were able to stay home through the regionals and super regionals, winning five of six games by a combined score of 50-22. Having the home field advantage was also a major key to the Hogs’ success as more than 10,000 fans filled up Baum-Walker Stadium during each of Arkansas’ postseason games, including 11,000 or more during the Super Regionals.

For the second consecutive year, Arkansas faced off with a conference foe during Super Regional action, taking on Ole Miss at Baum-Walker Stadium. Last year, the Razorbacks hosted South Carolina, bringing their season total to seven, the most meetings with a team in one season in program history. By the end of the 2019 NCAA Fayetteville Super Regional, that record was broken, as the Hogs and Rebels reached eight games against each other in this year.

In the opener, the Razorbacks commanded a dominating 11-2 win, but fell, 13-5, in game two to force a winner-take-all Super Regional finale. On Monday, the Razorbacks put up crooked numbers in the second & third innings and never looked back, closing the book on the series with an emphatic 14-1 victory to punch the program’s 10th trip to the College World Series.

Trevor Ezell, who will be playing in his first CWS as a senior, has set the tone for the Arkansas hitters in the leadoff spot, putting together a .328 average at the plate. He’s racked up a .573 slugging percentage to go with 79 hits, including 25 doubles, two triples and 10 homers, along with 71 runs scored and 47 RBI. During the Super Regional, Ezell went 7-for-14 with four RBIs and five runs.

Saturday’s Probable Starter – RHP Isaiah Campbell
Isaiah Campbell will, once again, get the ball for the Razorbacks to open the weekend at the College World Series against Florida State. Campbell, a unanimous All-American, has given Arkansas ace-like numbers all year as the Friday night starter. With a team-leading 2.26 ERA, Campbell has garnered a 12-1 record and struck out 115 batters over 111.1 innings, which are all career-bests heading into the CWS. Campbell is coming off, arguably, his best outing as a Razorback, working a career-long 8.1 innings in the NCAA Super Regional last week against Ole Miss, striking out seven. Campbell has a 1.65 ERA in 16.1 innings of the NCAA Tournament this year and has pitched eight or more innings in each of his two starts.

Unfinished Business
Having to face in-division foe Ole Miss for a school record eighth time this year, the Razorbacks pummeled the Rebels in game three of the NCAA Super Regional, 14-1, to advance to its 10th College World Series in school history. It was the second-largest Super Regional victory in school history and allowed Arkansas to advance to the CWS in back-to-back years for the first time in program history. Heston Kjerstad, Casey Opitz and Trevor Ezell combined for six of Arkansas’ 12 hits. Kjerstad and Opitz both hit home runs in the blowout as well.

DVH By The Numbers
Head coach Dave Van Horn has advanced to eight College World Series as a head coach and two as a graduate assistant in 1985 and 1987. Going back to his years at Nebraska, Van Horn has led his teams to 20 of the last 21 NCAA Tournaments. Van Horn has also won 40 or more games in nine of the last 11 seasons. He has the second most appearances in the CWS among all active head coaches (Mike Martin – 17).

>> The Razorbacks won a share of the SEC Western Division title for the second-straight year, finishing with an 20-10 conference record. It’s Arkansas’ sixth division title in school history and fifth under Dave Van Horn.

>> Last year, the Razorbacks matched their best finish in program history, falling to the Oregon State Beavers for their second National Runner-Up finish in school history (1979, 2018).

>> Arkansas is slated to face Florida State (41-21) in its opening contest of the CWS. The Hogs and Seminoles have only faced off five times in their extensive histories, but all five games came in the postseason, four in NCAA Super Regionals.

>> Right-hander Isaiah Campbell will get the ball for Arkansas’ first game of the CWS. Campbell has been the Friday night starter all season and is 12-1 on the year with a 2.26 ERA and 14 quality starts. Last week against Ole Miss, Campbell worked a career-long 8.1 innings, throwing 102 pitches and striking out seven. He’s struck out seven or more in both of his tournament starts.