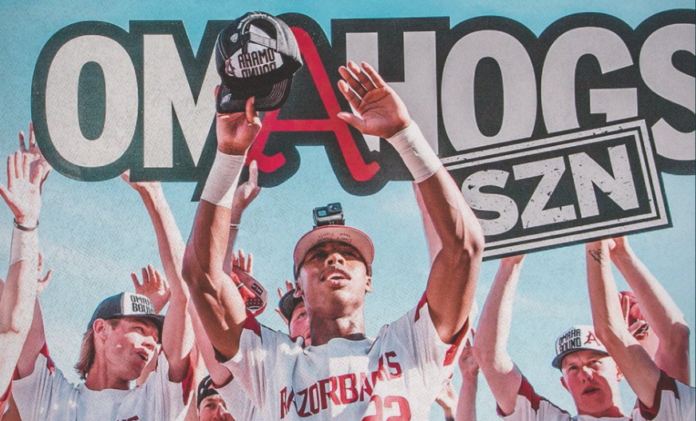 Isaiah Campbell said his college career turned around the last time Arkansas was in the College World Series. In the summer 2018, Campbell was a talented sophomore, though not yet the mature flamethrower he was destined to become. Arkansas coach Dave Van Horn believed in him, however. Needing a win to advance to the championship series, Van Horn handed Campbell the ball against perennial power Florida.

Over 5.1 innings, Campbell gave up just two hits and struck out eight batters in a 5-2 win that sent the Razorbacks to the title round against Oregon State.

Razorback fans don’t have to reminded of what happened next. Arkansas won the first game in that championship series, then lost the next in heartbreaking fashion. Oregon State ran away with the third game and the series, leaving Razorbacks worldwide wondering what could have been had a single foul ball been caught.

But that loss also set the stage for what may be a glorious redemption story.

Arkansas is again in the College World Series, with a group of veterans hungry to become defined by something besides “What if.” Count Campbell, now an All-American and the Razorbacks’ ace, among them.

“We have unfinished business up there, being so close to winning a national championship last year,” Campbell said before the Razorbacks departed for Omaha, Neb. earlier this week.

The Razorback players are confident their team, which scorched Ole Miss in a Super Regionals rubber match by 13 runs, has the experience, talent and motivation to win the 2019 College World Series. So does the Razorbacks’ play-by-play radio man, Phil Elson, who put the nation on red alert to wrap that Ole Miss win:

“A bright red Razorback caravan is headed for Omaha, Nebraska,” Elson intoned on air. “And this time we’re coming for the whole d*mn thing!”

Top college baseball writers made the below predictions:

Martell ranks Arkansas as the second-best team in the field, behind only those camo-wearing eggheads from Nashville. He thinks Arkansas will beat its first opponent, Florida State, before needing to tackle a high-scoring Texas Tech squad: “That’s what Arkansas has to do to move on to the best-of-three finals, where anything is possible. The Razorbacks will probably see either Vandy or Mississippi State, two formidable opponents. But after being one out away from sweeping Oregon State and winning the title last year, the Hogs have something to prove in 2019.”

Mastroianni believes Arkansas will need to take out Michigan, not Texas Tech, in the College World Series opening bracket: ” This is Arkansas’ bracket to lose,” he wrote.

“The Razorbacks got a very good draw with two teams that are Cinderella stories in their bracket. And Texas Tech has never played well in Omaha.

I’m kind of leaning towards this bracket coming down to Michigan and Arkansas.”

Mastroianni, too, predicts a College World Series championship series between Vandy and Arkansas — with (sigh) the nerds winning.

Rogers, too, thinks it will come down to Vanderbilt and Arkansas. He made that championship series prediction before the season.

Rogers thinks very highly of Arkansas’ offense in 2019, going so far as to call it “a juggernaut” and saying it’s more versatile than the 2018 version. Unexpectedly elite performance from the likes of Matt Goodheart and Jack Kenley — selected as a third-team All-American today — plays a big part here.

Kenley batted .319 this season with 10 doubles, four triples and 53 RBIs with a fielding percentage of .976. His story is especially amazing considering how much he has improved.

Dave Van Horn breaks it down:

“The first hit I think [Kenley] got in his first college season was in the SEC Tournament. He didn’t even have a batting average. He was 0-for-20. He waited his time, Carson Shaddy came back, a couple of other guys came back last year and he’s probably thinking, ‘Hey, I’m wanting to be in the lineup as a sophomore,’ and he was kind of a defensive replacement playing a little here, a little there.”

“He is a really good fielder, really good teammate, really good student. He got his shot this year and he’s really taken advantage of it. We wouldn’t be sitting right here right now if it wasn’t for him having the year he’s had. He’s been incredible.”

The sports betterati are also pretty high on the Hogs. Some of the online betting sites found through gamblerock.com have Arkansas as national championship co-favorites, or nearly co-favorites, with Vanderbilt.

In case you’re wondering, a minority of national baseball writers are not quite thinking clearly. Bleacher Report’s Joe Tansey, for instance, predicts Texas Tech will make it out of Arkansas’ bracket to play Vanderbilt for the College World Series title.

Read more about the reasons experts like Kendall Rogers believe the 2019 Arkansas offense is more potent than the 2018 version in my post here: