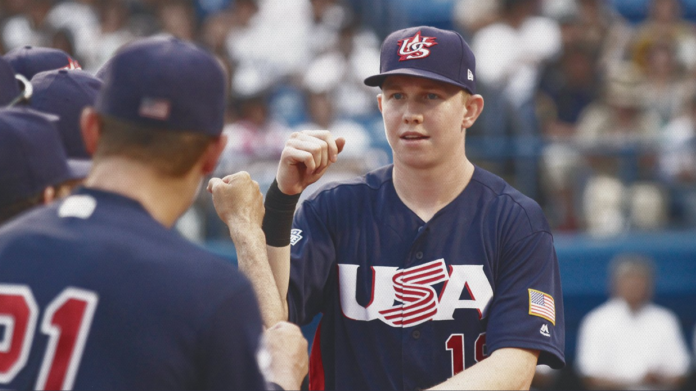 The USA Baseball College National Team didn’t exactly end its summer in storybook fashion. Up 2-1 against Team Japan on the road in a best-of-five series, it dropped its last two games by a combined score of 15-2. It was the 16th straight time that Team USA has lost the series to Team Japan in Japan.

Despite the rough finish, though, one Hog shined for the red, white and blue throughout. In 14 games in July, Heston Kjerstad put together one of the best national team performances ever seen from a Razorback.

He also led the Americans in batting average at .395.

Kjerstad smokes a homer for ol’ Uncle Sam at the :37 mark above

Heston Kjerstad’s national team performance was better than other Razorbacks who played on the same squad in the recent past. For instance, last summer, Dominic Fletcher hit .171 with 4 RBIs in 35 at-bats.

In 2017, catcher Grant Koch led the team in batting average, but didn’t connect as often:

In summer 2019, Arkansas catcher Casey Optiz joined Kjerstad on Team USA. Making six starts, he was great behind the plate. “He finished with a perfect fielding percentage and caught five runners stealing,” notes Pete Roulier of HawgSports.com. “However, he continued to struggle from the batter’s box and only managed one hit in 18 plate appearances. Last season for the Hogs, the Colorado native hit for a team-worst average of .243 with three homers.”

Dave Van Horn expects bigger things from Opitz heading into the 2020 season, his junior year. “He is going to make a jump hitting wise there isn’t a doubt in my mind,” Van Horn said. “The plan for him was just to keep him here this summer and have him put on 10 of 15 pounds if he could. Then, further down the road, you won’t see him catch for us much this fall. We’ve got a couple of catchers coming in, young guys that we want to really catch and get a lot of time.”

Likewise, Van Horn expects Kjerstad to relay this Team USA success into bigger things for the Razorbacks. Last year, Kjerstad hit for an average of .327 and led the team with 17 homers, but his ceiling is much higher.

“If his strike zone awareness and staying in the zone when he swings and quit getting himself out, man, he would make a huge jump,” Van Horn said. “If he can do that, it would be big. Basically, flip those walks and strikeouts.”

If this happens, expect the Hogs to vie for a third straight appearance in the College World Series, and deeper run than in 2018.

*Source is the Team USA Twitter feed. As of July 23, final team statistics were not available.