Search
Home Arkansas Football Trey Knox Gets His Garth Brooks On, and the Ladies Love It 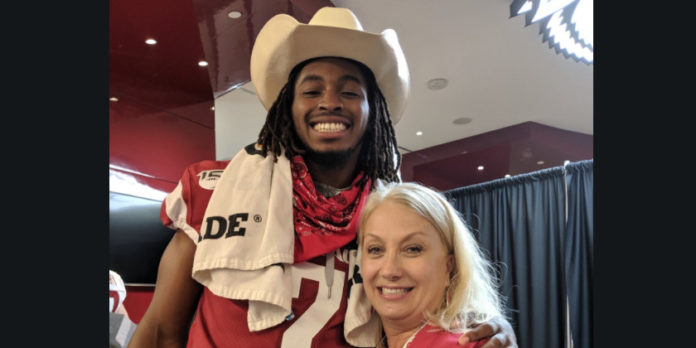 With a ball in their hands, Trey Knox and Hudson Henry are used to bringing crowds to their feet.

Knox, after all, caught 35 receptions for 558 yards and ran for about nine yards a carry on his way to nine touchdowns last year in high school. He’s regarded as one of the nation’s best wide receivers in the class of 2019 and projects to be a major force on the field for the Hogs this fall.

All Henry did, meanwhile, was catch 86 passes for 1,207 yards and 14 touchdowns at Pulaski Academy. He was ranked as the No. 1 tight end in the same class.

Turns out, for both, that whole ball thing is overrated.

Trey Knox and Hudson Henry are more than capable of bringing the house down without one. They proved it on Saturday during the annual Ladies Clinic at the University of Arkansas. Below, Trey Knox grabs a white cowboy hat, takes the stage and starts performing Garth Brooks’ “Friends in Low Places.”

“Blame it all on my roots,” he belts, and you can hear the surprise ripple through the audience in the video below. It’s as if the fans are thinking: “Oh snap, this kid’s for real.”

“I showed up in boots,” Knox powers on. “And ruined your black tie affair…”

Yep, it’s obvious Knox grew up just down the road from Nashville, in the small town of Blackman, Tenn. Country karaoke seems as natural to him as torching defenses on the gridiron.

And I saw the surprise
And the fear in his eyes
When I took his glass of champagne
And I toasted you
Said, honey, we may be through
But you’ll never hear me complain

Nor do you hear a single one of the more than 100 ladies who attended the football clinic complain on camera. They didn’t protest when Hudson Henry took the stage, either.

Although Henry’s voice isn’t, shall we say, No. 1 ranked, he still delivers the goods when performing. Enjoy his rendition of Journey’s “Don’t Stop Believin’ (Small Town Girl)” here:

It wasn’t just offensive dynamos getting in on the karaoke action at this event at the Fred W. Smith Football Center. Jalen Catalon, the Hogs’ heralded freshman safety out of Texas, also took his turn making the ladies alternatively swoon and laugh.

Here’s Catalon with his Cover One on country star Josh Turner’s “Your Man.”

These three star freshmen are clearly up to the challenge of entertaining Hog fans in whatever way they can. It’s inevitable they will deliver quite a few on-field highlights this fall.

The main question is if they can minimize typical freshman mistakes. If so, expect the charismatic Trey Knox to emerge as one of the most popular freshman in recent Razorback history.

In that case, it may not be too long before Justin Moore, the country singing Hog superfan, asks Knox to join him on stage.