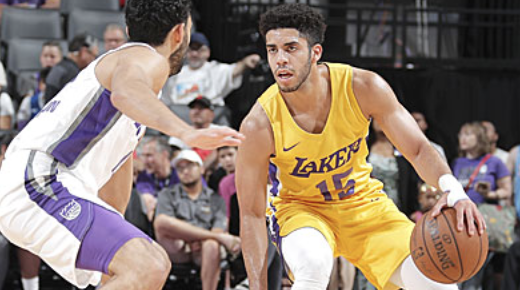 No Arkansas college is more known for a single athlete than UCA and Scottie Pippen.

The University of Central Arkansas had only produced one regular-season NBA player. But that one player also happened to be the best one that the state has ever produced. Pippin, a Naismith Hall of Famer and six-time NBA champion, is one of the greatest two-way players in the sport’s history.

Pippin, however, may soon lose his grip on the status as the only UCA player to play regular-season NBA minutes. On top of that, he’s no longer the best UCA player as far as purely collegiate accomplishments go.

Howard was one of the most impressive players in this year’s NBA Summer League, a stretch that was highlighted a 25-point detonation and a three-game tear in Sacramento in which he averaged 15 points on 50% three-point shooting.

This stretch came 16 months after he made a major splash at UCA. In his four seasons there he finished as the school’s all-time leading scorer and averaged more than 25 points a game his senior year — third-best in the nation. He also helped UCA nearly knock off UCLA.

“Howard first caught the nation’s attention this season when he scored 35 points against No. 20 UCLA back in November 2017. The Bears took the Pac-12 Bruins to overtime before losing 106-101 but still received major play nationally for the near upset.”

“After that UCLA game, what we did as a team and what Jordan did individually, [we were] all over SportsCenter with Scott Van Pelt that night, and the next day as well,” UCA coach Russ Pennell told UCA Magazine. “You can’t buy that kind of exposure. People have taken notice of UCA because of some of the things this young man has done in his career. He has helped put us on the national map.”

Although he played off the ball exceptionally well and proved himself as one of the nation’s best sharpshooters, his size (5’11”) and thin frame hurt him come draft time. Howard went undrafted. In 2018, in the NBA Summer League, Howard got off to a hot start playing for Golden State Warriors. Just after halftime of his first game, he had 10 points, 6 rebounds and 1 assist. But a knee injury after that point limited his effectiveness the rest of league play.

Jordan Howard then played for Toronto’s G-League team, putting up 11 points a game on 40.5% shooting from deep, along with 2.7 assists and 2.1 rebounds per game.

As well as he played in spurts this summer, and as much as it helps that’s he’s added muscle, it’s still unclear whether he’ll be able to carve out a spot on an NBA roster. At his size, he’ll almost certainly need to become more of a distributer in order to get big minutes in the NBA. He may need to keep improving on his summer league and G-League numbers before getting a call up.

“You could just put [House] in a position and he could go get a shot. I kind of had that in the back of my mind when we got Jordan, although I think Jordan’s much more of a point guard than Eddie was. But when we put him in a concept—meaning put him in an area, send a screen at him or fake a screen at him or run a dribble handoff—he finds ways of scoring and I think that’s what makes him so unique.”

Another apt comparison is former Razorback Jannero Pargo, who like Howard played off the ball exceptionally well and was a dead-eye shooter. Pargo also made a living as a shoot-first undersized guard, though he had about three inches on Howard. In 2002, coming off the bench, he even helped bring home a world title for the Los Angeles Lakers.

Just like in that Shaquille O’Neal-Kobe Bryant era, the Lakers are once again preseason NBA title favorites. Many sports betting experts and online gambling sites consider the Los Angeles Lakers as co-favorites for the 2020 NBA championship alongside the Los Angeles Clippers.

With enough improvement, Howard would make a devastating addition to either team’s bench in the 2019-2020 season.

Howard may or may not end up making a splash at for an NBA team during the regular season. If not, it won’t be for lack of effort. The below video shows how Howard has honed an amazing skill set and Steph Curry-like accuracy on open looks. In the same way, Curry and his younger brother Seth helped each other get better, so do Jordan Howard and his younger Markus Howard.

Markus Howard, by the way, is a college superstar. The rising senior scored 25 points a game last season and is a strong candidate for 2020 national player of the year awards.