Search
Home Arkansas Football Georgia Has Big Edge in “Stars,” So Why Should Hogs Even Bother? 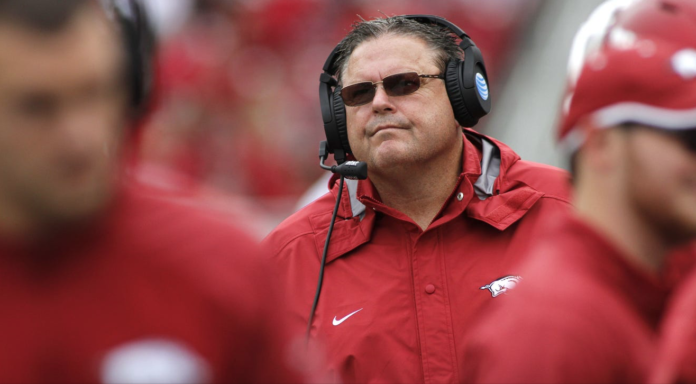 Some of those services might rank a player a 4-star that another evaluates as a 3-star, and so on. Rankings are often debatable. Heck, they’re the bane of existence to a lot of college coaches, who swear off the recruiting rankings when they say they trust their own eyes. And yet fans seem to live and die on every commitment announcement and signing day, as if it can assure them of four more years of program success.

If recruiting rankings determined the national champion, Georgia surely would have won at least one title since its last one in 1980.  But, because so much attention is put on the national signing dates (especially the traditional one in February), it’s still worth taking a look at these numbers as they pertain to the Georgia-Arkansas matchup on Saturday.

Georgia will suit up 67 players who rated as either a 4- or 5-star when they were recruited; Arkansas has 20 such players with hardly any national Top 100 players. But all of the Bulldogs’ 4- and 5-stars can’t play at the same time, of course, and naturally the Twitter account NCAAF Nation isn’t saying Georgia will win 67-20, though that might not be far off from the actual score when 6 p.m. rolls around Saturday.

What these Twitterati do say is, in a subjective world of evaluating talent for big-time college football from Friday night high school heroics, Georgia can reach down at many more positions than Arkansas can for seriously talented football players. We’ve seen the Dawgs dip deep to the third and fourth line on the depth chart for Heisman-like running backs in recent years, so this is nothing new.

Arkansas, even in its best days, may have had solid players across the front line, but not a lot of depth behind it. What we from Arkansas have learned in 28 years of SEC football is, even on one given Saturday, the SEC seems to require you to be well stocked in your second units — particularly in the defensive front seven.

Sure, you’d better have a good-to-great quarterback and, if not that, at least one big-play running back or two, along with a difficult-to-cover receiver or three, plus some mean guys up front in the O-line. But that front seven on defense is where the big games are ultimately going to be decided.

We can note this abnormality, for Arkansas, that a friend recently pointed out about recruits, though: When was the last time the Hogs had 4-stars at both the starting and backup defensive end positions? They have those this year in Dorian Gerald, Julius Coates, Mataio Soli and Eric Gregory. (Officially, Gerald and Coates were ranked 4-star out of junior college and weren’t well known out of high school, but we’re still counting them here.)

On top of that, for the first time in program history, Arkansas has a quarterbacks room with at least three players who were at least four stars coming out of high school in starter Feleipe Franks and backups KJ Jefferson and Malik Hornsby.

The professional oddsmakers started the line for Saturday’s matchup between the two teams at 26.5 points, meaning Georgia basically should win the game by four touchdowns. That sounds about right, based solely on the past two years of Hog football. (The meaning of the point-spread line is actually a difference that will get the same number of gamblers betting on either side of the “line”; the expert oddsmakers calculated 26.5 points as that number to attract equal betting on the game, half the gamblers thinking Georgia would win by more than 26.5 or that Arkansas would not lose by more than 26.5 points).

Georgia returns enough on defense, most experts think, to limit Arkansas even on its best day to what, say, Baylor managed in the Sugar Bowl last January against the Dawgs — a hard-earned 14 points. Georgia lost a lot off the offense that won that game with 26 points, by the way.

Again, though, this goes back to those 67 4- and 5-star players – Georgia sent some offensive line studs to the NFL and then reached down to the next line to fill those spots with players also expected to play on Sunday. But will they be cohesive enough, without their O-line coach from last year (that was Sam Pittman, of course), in game one of the Season of COVID? Georgia never lacks a big-time running back, but will the inexperienced new quarterback D’Wan Mathis perform at a high level on the road, even if it’s against Arkansas’ defense and even if one-fifth of the stadium is occupied?

Will Arkansas finally have a defense after whatever it was the departed DC-turned-middle school coach John Chavis put out there the past two years that gave up gobs of points? Talent was said to be an issue, and yet tackle “Sosa Agim” and safety Kamron Curl on those teams made NFL rosters this summer. Linebacker De’jon Harris had at least a look. Linebacker Dre Greenlaw from the 2018 team is getting significant minutes in San Francisco, too. Arkansas wasn’t putting 11 stiffs out there.

You must have some pass rush, though, and Arkansas lost its one pass rusher in 2019, Dorian Gerald, in game one. But he’s back with three much improved and highly rated younger players at end. The maligned Arkansas secondary of the past several years will look a lot better just from some semblance of a pass rush/pressure on the opposing quarterback. No one can cover SEC receivers for extended seconds, on this level or the next.

We wait to be convinced that linebacker is no longer a liability position, however. Yes, if people want to blame talent for the Hogs’ shoddy defense of the past 4-5 years, Arkansas has been bereft there, not to mention lacking quality and numbers at end, at safety, and at cornerback.

As for overall recruiting, and what Pittman inherited and what he’s been able to fill in his limited time on campus after Chad Morris was fired – he signed as good of a first class as any Hog head coach of the past 30 years with the exception of Bobby Petrino’s first group.

Fortunately for Arkansas, games rarely line up with those totals of 4- and 5-stars. If they did, Kevin Sumlin would still be at Texas A&M and making the $7.5 million a year that Jimbo Fisher is being paid, Les Miles would still be slogging along at LSU with his 1960 offense, and Butch Jones would have never bottomed in Knoxville. If the season were based on each team getting a point for every 4- and 5-star on the roster, though, according to the NCAAF Nation’s calculations, Alabama (70 4- and 5-star signees) and Georgia would cruise into Atlanta on Dec. 19 unscathed against any other SEC competition.

Why even play the games?

To that end, when it comes to 4- and 5-stars, Arkansas outdistances Missouri (6!; just SIX 4- and 5-stars on the entire roster), Ole Miss (17) and Mississippi State (19) among its 10 opponents. I say we take those three wins simply by having more “stars,” call it a season, and wait it out until Alabama and Georgia meet Dec. 19 to settle all the real bragging rights.

In all seriousness, it’s a good thing for Arkansas that the one consensus four star on its roster, senior transfer Feleipe Franks, is at quarterback. Franks is the right national Top 100 blue chip recruit to have at this juncture in Sam Pittman’s plans for rebuilding a downtrodden program.

For a Georgian perspective on Arkansas-Georgia, see the below. This joker’s take on Feleipe Franks at 9:15 is especially eye-opening: