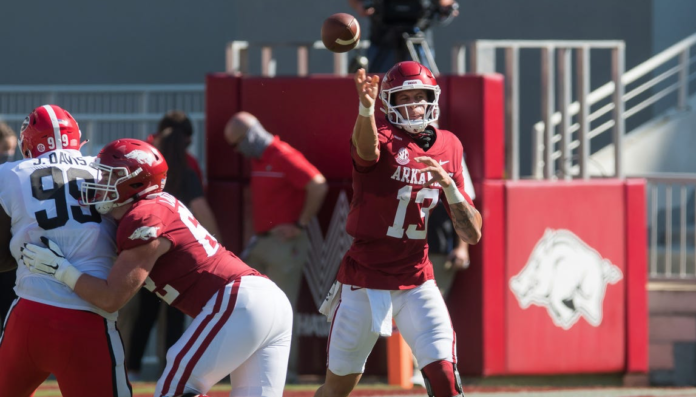 Feleipe Franks made his long-awaited debut as the Arkansas Razorbacks’ quarterback on Saturday in the Hogs’ season opener against Georgia.

Lord knows there was a lot of room for improvement at this position. In 2019, Nick Starkel and Ben Hicks combined for 12 interceptions and only 9 touchdowns. Fans celebrated long and hard for good reason last winter when Franks announced he was transferring from the University of Florida where he had much success.

Leading up to this game, the Hogs’ home crowd was unusually quiet due to COVID-19-based restrictions. Only 17,000 fans were in the more than 80,000-seat Razorback Reynolds Stadium. Overall, fans weren’t chanting as wildly — nor were many chants coming from the usually rambunctious student section I sat in.

From our vantage, Franks was an improvement over the two former Hogs, but he was not the program savior some Razorback faithful hoped he could be as Arkansas lost 37-10 to Georgia.

But he had some bright spots. In the first quarter, Franks connected with sophomore wide receiver Treylon Burks for a 49-yard touchdown pass when he rolled out left and hit Burks, who tip-toed the sidelines and shed a defender to scamper into the end zone to put Arkansas up 7-0.

See Burks’ first touchdown as a Razorback right off the bat here:

That play electrified the crowd, and for a little while it sounded like the stadium was jam-packed — though it was hard to tell how much of the cheering was the artificial crowd noise and how much was from actual fans.

The rest of the game for the offense was not great. Arkansas had eight 3-and-outs in all. Its few attempts at trick plays did not work well either. An end-around to senior wide receiver T.J. Hammonds ended in a safety. A wide receiver pass play designed for Treylon Burks ended with Burks throwing a ball into double coverage for an interception. This came one drive after Franks threw a pick-6.

“Georgia has a really good defense coached really well,” Franks said afterward. “They did a good job. They came out and executed, played a really good game. And at the same time, I thought we had positives on offense, and our defense played lights out, as well. They did a really good job of keeping us in the game. We’ll just all continue to get better in all three phases of the game.”

Overall, Franks ended his night completing 19 of 36 passes for 200 yards, a touchdown and two interceptions.

Franks wasn’t kidding about Georgia being a very good defensive team. Last season, they kept opposing running backs to less than three yards an attempt and allowed only LSU to score more than 20 points on them. In every game until Alabama, Franks will not have to face the same level of coverage as he did on Saturday.

Feleipe Franks had some more good moments and was able to hit his target on the run a few times. Franks appears to be a solid quarterback but needs to focus more on short passes. A few screens looked as if he was just putting the ball out there instead of throwing to his running back, and his first interception was an overthrow of Hudson Henry who was only 5 yards down field.

However, early on Arkansas did not need a great game from Franks to stay competitive. The Arkansas defense only allowed three points in the best half of defensive football the program has produced since 2014. The Razorbacks took a lead heading into halftime 7-5. (The safety was scored on the offense, not the defense.)

Freshman safety Jalen Catalon stood out for the defense. He was all over the field for Arkansas. He seemed to be the first defender to the ball on every play in the first half.

He appears to be a bright spot on the defense. Like the rest of the overworked defensive starters, he did seem to be a step slower in the second half. The defense was on the field a lot in this game because the offense had so many 3-and-outs. The offense could not stay on the field.

“Offensively, I thought we could have played more consistent,” Feleipe Franks said. “At the same time, those interceptions, we had a miscommunication on whatever. Those things happen. Those are things we’re going to get coached up. Those are things that we’ll see it on on film, and then you don’t make the same mistakes twice.”

The first half was very promising for the future in Fayetteville. The Hogs dominated the offense of No. 4 Georgia and kept them out of the endzone. The second half, when the Bulldogs’ backup QB got cooking, looked more like the 2019 Razorbacks.

It was a return to form for the Heartbreak Hogs — every great first half comes with an equally terrible second half.

This team does have promise. Feleipe Franks and Jalen Catalon flashed potential. They must continue to improve and lead their respective groups for an entire game to have any success in the SEC this year.

Get more insight into Arkansas-Georgia and what means for the Hog going forward: