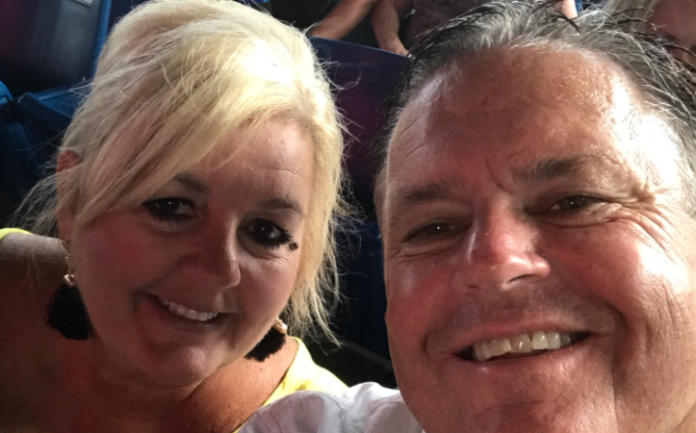 Regardless of situation, even through the darkest of times, Sam Pittman proves to be a powerfully positive force. The new Arkansas coach will need to draw deeply from that optimism this week. The Razorbacks are coming off a resounding loss to Georgia and in a few days will travel to Starkville to play a quarterback that just obliterated the defending national champions by passing for an SEC-record 623 yards.

Fortunately, as the reality of the Hogs’ hellacious 2020 schedule sets in, Sam Pittman has the love of his life to lean on: Jamie Pittman. Married for 34 years, Jamie plays a vital role in the head Hog’s ability to lead. Jamie doesn’t generate the karmaic headlines that former head Hog wives like Jen Bielema did, but make no mistake — her steady and loving presence in the background will play a big role in Arkansas’ success this season.

Jamie Pittman’s already well-liked by the players and other staff. “The boys call me ‘Mama Hog,'” she said during a THV interview. “I don’t know if I like that,” Jamie added, chuckling.

But more recently, Sam Pittman explained the nickname was his doing: “I call her ‘Mama Hog,’” he said on his radio show. “She doesn’t like that. I don’t know why. But I like it, so that’s what I call her.”

Sam Pittman, however, likely has no idea that nickname was already taken in Razorback land. Linda Stoerner, the mother of former Razorback quarterback Clint Stoerner, has been known as “Mama Hog” for decades.

To say that alias is a point of pride to Clint, also a sports radio host, would be an understatement.

I’m really sorry to do this but I think you are tagging the wrong acct. My handle is also Mama_Hog. If you wouldn’t mind untagging me that would be great. Sorry about the mix up!

*Linda Stoerner does not go by “Mama Hog” on Twitter. The @Mama_Hog in the above comment is actually an (apparently) very polite, self-described they/them Satanist.

Linda Stoerner is one fit Mama Hog, by the way. If she’s still able to dominate the same grueling workouts she was knocking out a few years ago at age 67, Barry Odom could use her for extra defensive depth against Mississippi State:

As you can see in the way Clint urges on his mom in the clip above, the Stoerners are just a little competitive.

So it’s no surprise that when Clint Stoerner was recently asked who the real Momma Hog is — Linda or Jamie — he didn’t hesitate:

“She definitely had the moniker first, I will give her that. She should have all the trademark rights I would think,” he said on The Buzz 103.7 FM, chuckling. “If Coach Pittman wants to discuss that, I’ll give him a phone number. I ain’t getting in the middle of that battle. I promise you that, but I’m going to ride with Linda.”

He added: “I don’t know Coach Pittman’s old lady, but I’m going to go out on a a limb and say she don’t want to mess with the original ‘Mama Hog.’ This one over here’s pretty tough.”

Jamie Pittman’s isn’t the type to go crazy on some kettlebell at a D1 Fitness. But she sure knows how to host.

In the interview below, she describes when Arkansas athletic director Hunter Yurachek visited their home in Georgia in December 2019.

“I wanted everything to work out so good. I ran to Starbucks, got a big jug of coffee for the AD, all the pastries, had everything all set out on the table. So when they came in, I was trying to be a good hostess.”

“Sam was so excited, and I was too, and I could just feel sitting next to him — he was almost a little rag doll when they offered him the job. His shoulders sank, and he sat down and just started crying. He’s very emotional, but he was just so happy, and I was so happy. We were just so thankful.”