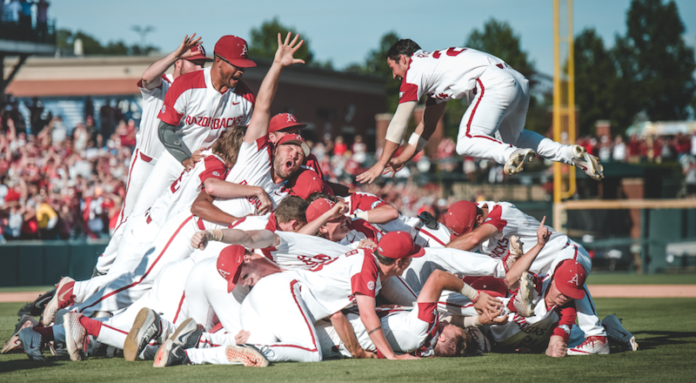 Thanks to the historic badness of the football program, and schizophrenic performance of the basketball program, many Hog fans have gnashed their teeth in frustration these last two years.

Things would be a lot worse without the baseball program.

Fortunately, Dave Van Horn’s Hogs have picked up some of the slack in the last two seasons. They have made back-to-back College World Series for the first time in program history, coming oh-so-close to a national championship in 2018.

This means, in all, Arkansas has three trips to Omaha in the last five years — and four trips in the last eight years — an accomplishment befitting the Hogs’ elite training facilities and world-class Baum Walker Stadium.

National experts are taking notice of the Razorbacks’ rise.

In its biannual ranking of all Division I baseball programs, D1Baseball ranked Arkansas as the nation’s third-best program behind only Florida and Vanderbilt.

Below, notice how the Hogs have skyrocketed 10 spots up the list since the last ranking in 2017, the largest jump of any program in the Top 24:

The SEC has 14 members in the Top 100, the first time a conference has gotten all members in such a ranking. “The combination of the Hogs’ long-term consistency, the current momentum of the program, and its infrastructure “gives Arkansas a slight edge over the other elite programs right behind in the rankings,” college baseball analyst Aaron Fitt writes.

“Baum Stadium ranks as one of college baseball’s very best venues, with a huge, passionate and loyal fan base, all of which helps Arkansas attract premium talent on the recruiting trail year after year. Of course, blue-chip prospects also choose Arkansas because of Dave Van Horn’s long track record of development. The Hogs are always well coached, which is a major reason they have been remarkably consistent in the Van Horn era, making 16 regionals in his 17 years at the helm — no small feat in the ridiculously competitive SEC.”

Now, the Hogs are gearing up for a run at three CWS appearances in a row. This will be an important year for arguably the program’s two brightest stars, juniors Heston Kjerstad and Casey Martin.

Kjerstad, in particular, has had a major offseason. At Van Horn’s request, he’s moved from the outfield to a position he’s never played before: first base. “He’s a baseball wizard,” the All-American Kjerstad said in September. “He knows what he’s doing, so I was just listening to him. Whatever he says, I usually do. So he was like, ‘You should take some reps.’ I was like, ‘Okay. Coach knows best.'”

Dave Van Horn said there are two reasons he made the move:

Van Horn also provided some background on why he felt Kjerstad would be a good fit for the position which was held by Trevor Ezell last year:
Kjerstad “was an infielder as a younger player, I actually saw him take a few ground balls early in the recruiting process and I thought he was pretty good. Then he grew a lot [to 6’3″] and became a full time outfielder, and he actually played center field his senior year in high school.”

“I talked to him about it right before fall ball started, I’d been thinking about it all summer and he was all for it. Tried to play some first base. His comment to me was, ‘I can play outfield, you know, in my sleep almost.’ So he still gets his work in the outfield, but he’s spent most of the time, I’d say 95% of the time with the infielders this fall.”

So far, Kjerstad has first base played in only one game situation: a 3-4 exhibition game loss to Oklahoma last week. While his move isn’t meant to be permanent — injured Matt Goodheart is also a candidate once he recovers — Kjerstad played well in that one showing.

“He wasn’t particularly challenged during the exhibition, but Kjerstad looked smooth during the plays he had to make,” according to HawgBeat.com’s Andrew Hutchinson. “His footwork looked right on pickoff attempts and he had no issues fielding the ground ball or pop up hit his direction.”

“There’s no way of knowing – based on the exhibition alone – if he’ll be an All-SEC defender at the position, but it was easy to tell he looked more comfortable than previous Van Horn experiments at first base, like Hunter Wilson and Evan Lee.”

How about pitcher Connor Noland?

Noland, a sophomore who was playing quarterback for the Hogs football team this time last year, is now concentrating solely on baseball.

Because of the switch, “I’ve seen his arm strength improve, velocity is up, breaking stuff is really good. It’s good to have him around in the fall for leadership and the players respect him, he’s a great teammate. I’ve seen him get better in three or four months at a really good pace.”

Read more about what star Razorback baseball players did this offseason in my post below: