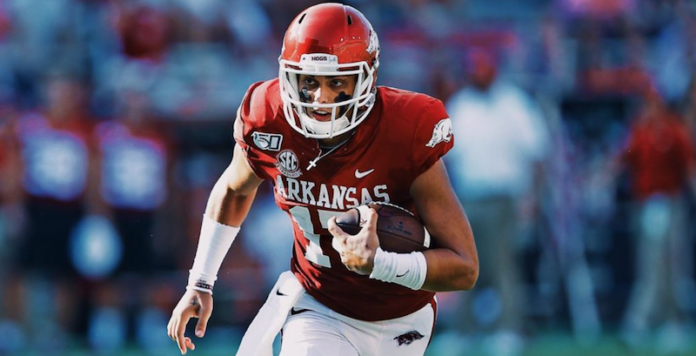 Funny, how the timing works here.

One week after quarterback Nick Starkel decided to destroy his beloved T-shirt of heartthrob idol Justin Bieber, he delivered his most macho play as a Razorback to date.

In the middle of the second quarter against Texas A&M, Starkel got jumpy and threw a deeply ill-advised pass attempt at the Aggie goal line. The ball, seemingly seeking out the most efficient way to punish Starkel, ricocheted into the hands of Aggies defensive tackle Justin Madubuike.

The 6’1″ Madubuike then shifted his 304 pounds into first gear in a hurry, trucking toward the opposite endzone. Starkel, though, wasn’t going to let his former teammate gash the Hogs for more yards. He made a living sacrifice of his 214 pounds, offering it up to loco-motioning Madubuike as penance for his seventh interception of the season.

The result was pure physics, with a crumpled Starkel left in the wake. The collision gave Starkel a left arm contusion and would bench him for the rest of the game.

Starkel giving up his body was worth it in the short term. On the very next play, Arkansas stripped Texas A&M quarterback Kellen Mond and linebacker De’Jon Harris scooped up the fumble to return it 6 yards for a touchdown to get the Razorbacks within 14-10. That probably doesn’t happen without Starkel’s tackle.

In the aftermath of the game, a flood of well wishers hit social media to let Nick Starkel know they still believe in him, and hope he gets better soon.

One young man, apparently Starkel’s relative, asked him on Instagram why he took on Madubuike to begin with. To which Starkel replied: “Cus mama ain’t raise no b*tch.”

No doubt, many Razorback fans will cringe at this. Some will be appalled at such language, especially coming from a self-professed Christian. Some will wish he didn’t spend so much time on social media since he publicly swore off distractions after throwing five interceptions against San Jose State (though now’s as good a time as ever with a bye week).

Other fans will agree with the 193 Hog fans who liked Starkel’s salty reply.

They see in him a fighter who refuses to back down. They see immense physical gifts, a better arm than any Hogs quarterback since Ryan Mallett. They believe in Starkel, despite the recent flourish of six interceptions, because he seems to believe in himself (and Christ) so much.

They also appreciate that a person’s character should be judged more by his actions than his words. Here, Starkel seems like a good guy.

For instance, he honored his deceased friend Luke Laufenberg, son of former Cowboys quarterback Babe Laufenberg, by wearing “RIP LL” on his eyeblack and Luke’s initials on his cleats.

For 20 months, Laufenberg fought Burkitt lymphoma, a form of non-Hodgkin’s lymphoma. Nick Starkel was by his friend’s side toward the end.

Laufenberg died on August 22, 2019. Starkel heard the news right before practice. “I don’t even know why I practiced that day. If it wasn’t for coach [Kenny] Ingram, coach Tru[main Carroll] and coach [Chad] Morris coming up to me, talking with me and praying with me — and just helping me just digest that — I don’t know how I would have gotten through practice.”

Starkel did the scripture reading at Luke’s memorial service, Babe Laufenberg told Pig Trail Nation’s DJ Williams. Watch the powerful feature below. It says something about what kind of family that Luke came from that his father is not only willing to talk on air about his son (at 3:10 mark), but also speak so unselfishly about Nick and Nick’s football abilities:

Starkel’s always going to rub some people wrong with his outspoken love for Justin Bieber, his wholehearted embrace of “Club Dub” and his casual PG-13 rated cursing on social media.

The main question, in most Hog fans’ minds, is: Can he curtail the boneheaded picks, and become known for more than his words?

Read more about the aftermath of Texas A&M game here: