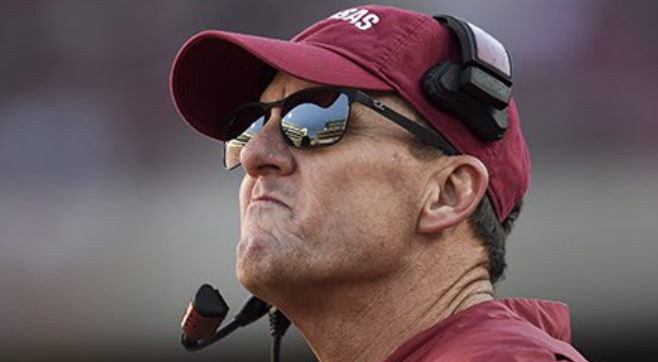 In year 2 of his Razorback coaching career, the late, great Frank Broyles led Arkansas to a 9-2 record — a five-game improvement from its 4-6 record the year before.

Chad Morris, meanwhile, has led Arkansas to two wins in his second year at the helm in Fayetteville — and no discernible on-field improvement from the previous season.

Broyles would go on to become the greatest Hog football coach of all, winning 69% of his games, seven conferences championships and one national title. His legacy is clear in the “Mount Hogmore” tribute below:

Chad Morris has yet to beat a Power 5 team as a head football coach.

On the surface, the two men couldn’t be farther apart. Broyles built Arkansas into the powerhouse that fueled fan expectations for the program to consistently challenge for Top 25 rankings and, occasionally, conference championships.

Morris is on the back end of a horrible, aggravating slide from national relevance that began with Bobby Petrino’s wreck. He is currently in the low point of his coaching career, a man whom many fans want to see axed as soon as possible.

But he still has his supporters.

Count Bruce James, the former Razorback great, among them. James was an All-American defensive linemen on some of Broyles’ greatest teams in the late 1960s. And James sees some Broyles in Morris, he said recently on the Buzz 103.7 FM.

“Coach Morris doesn’t have the ability to communicate like Frank did. He’s a school teacher, he’s a mathematician. Coach Broyles was great with manipulating speech and everything. He had a lot of charisma.”

“This guy does not, but what he does have is integrity — he cares about your education and that’s what Frank Broyles talked to me about. ‘What are you going to do with your life? You can play football wherever you choose to go, but what how important is that?’

But James is no Pollyanna. He also points out differences between the two beyond the box scores. “I just don’t see a polished speaker. I think he’s a very poor communicator with the press. He has those darting eyes that makes him look like he’s fearful. I think it’s more like he’s trying to concentrate on what he wants to say. What he stands for is what it’s gonna take to get kids to come play.”

But, thanks to all the losing and calls for his head, Morris “has been handcuffed now. You can’t go sell a really big time football player on coming to play for me and risk leaving home and then I get fired.”

A Caller Goes After It With Bruce James

As you can imagine, more than a few listeners choked a little when they heard James compare Morris to Broyles. One of them called to weigh in:

Caller: “Well, [Chad Morris] might have great integrity but Coach Broyles wouldn’t have gotten beaten by Colorado State and San Jose State. We should never lose to those guys. We’re not expecting a winning season. What we’re expecting is for us to get better and we’re not getting better... The recruiting stages from 1960 and now are completely different.

Bruce James [laughs]: Oh man, you’re saying human beings are different now than they were then?

Caller: “He’s pulling those recruits in, and guess what? They’re seeing what’s on the field. They realize what they’ve been sold, and it’s not the same, and they’re leaving.”

“I’m curious how many more recruits we’re gonna lose before it’s all said and done. I think the guy’s a great recruiter. I just don’t think he’s good head coach…. We are a laughing stock right now. Mississippi State put 600 yards on us.”

Yes, the heat’s on Morris. But James isn’t the only high-profile supporter he has left. Clint Stoerner shares why he believes Morris will stay for a Year 3 in my post here: