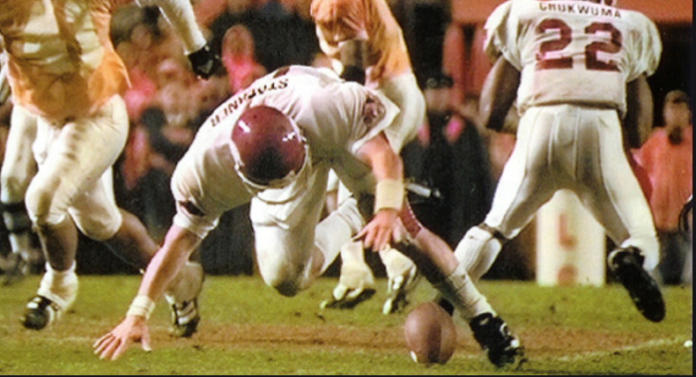 Clint Stoerner is most famous as the former Hogs quarterback who broke passing records while breaking hearts. In 1998, as a junior, he had an 8-0 Arkansas team on the brink of knocking off No. 1 Tennessee on the road, only to fumble the ball with 1:43 left after running into offensive lineman Brandon Burlsworth. Tennessee, of course, eked out the win — and likely the Hogs’ best shot at a national title in the SEC era was over.

These days, Stoerner has also made a name for his hot takes as an SEC analyst. But he well knows his most notorious feat, and he brought that up while discussing the shortfalls of the current Razorback coaching staff.

“You can rake this coaching staff over coals on how they’ve handled quarterback situations to this point,” he said on 103.7 FM. “I think they’ve completely dropped the ball — I know that’s hard to take from me — but I know they completely dropped the ball last year with Ty Storey and Cole Kelley and tried to force Cole Kelley as the starter, and it was never going to work.”

Predictably, 103.7 FM “The Zone” co-hosts Justin Acri and Wess Moore cracked up at this line. It was a bright spot during a week of commentary that has been anything but for many Hog fans.

Stoerner has long defended head Hogs coach Chad Morris, calling anybody who wants him to be fired in Year 2 “a loser.” Even after the Hogs were smashed by Mississippi State and fell to a 2-7 record, he still believes Morris should get a Year 3:

“I believe that when he was hired, that there is a reason why there was a longer contract and bigger buyout. I think he and everybody involved knew that it was bad at Arkansas, and it wasn’t just talent, it was culture. There was a lot of factors I think that went into that longer term contract and a bigger buyout, so I don’t think that there’s any situation, any circumstance where you would be fired after two years.

If you take into consideration the program that he took over, and then you also consider firing a coach and bringing in a new coach — how far that sets back an organization and sets back the program — I just don’t see where that’s a good idea.”

“I urge people to remember that the only reason that you’re seeing some hope right now is because you’ve got some young talent that are true freshman and true sophomores,” Stoerner continued. “And the same guy you’re banging on, that you want fired, that you don’t think is good enough, he recruited those guys and that was the best recruiting class that Arkansas has seen in a long time now. So, you’ve got to take the good with the bad and you just hope that as this moves forward the amount of bad you’ve got to deal with shrinks considerably.”

In the last three weeks, many fans’ hope that Morris will turn things around has shrunk considerably. Some of how that is due to how effective freshmen quarterbacks John Stephen Jones and KJ Jefferson have looked in recent games compared to the graduate transfers they replaced.

He prefaces his take by saying he has no problem with Morris keeping the talented Jefferson on the bench until the ninth game:
“I’m not concerned that he didn’t play K.J. Jefferson earlier, I would error on the side of saving that kid’s life rather than throw him to the wolves at the beginning of a year with the program with the shape that it’s in.”

Stoerner is more concerned with Morris’ ability to communicate why he kept him on the bench so long.

Referring to Jefferson’s debut touchdown drive, he said: “It took one play for me to go, ‘Good God, that is a significant upgrade.’ I don’t care how far behind mentally he is… A kid that will run downhill like that in this offense and will truck safeties from Mississippi State and get up — and the whole team rallied around him, the way the guys ran to him immediately when they were getting their skulls bashed in essentially. You need that kind of player, and so for me it’s where we go, ‘How did you not identify that earlier?'”

“Was it really just one play where you were blown away as much as I was? And if so, tell me that in the post-game press conference. Tell me that you hadn’t seen that yet and what you saw was mind-blowing and the future is bright.”

“I don’t make much of ‘We kept it really simple [because] that’s a freshman. He was not in a throw-it-1200-times a season type of offense in high school, and we should keep it simple for those guys.’ Hell, you kept it simple for John Stephen Jones.”

Jones, by the way, will make his first career start against Western Kentucky. It’s widely assumed Morris will be fired if the Hogs lose against WKU and its starter, former Hogs quarterback Ty Storey.

For this reason, nearly one in five of the more than 1,000 fans who answered radio host Josh Bertaccini’s poll below said they want Arkansas to lose on Saturday (which, yes, is a crazy-town kind of statistic).

QOD: Be honest. Who you rooting for on Saturday?

Stoerner isn’t the only former Razorback great supporting Morris. All-American Bruce James does, too. He provides an interesting comparison — then gets called out on air:

Clint Stoerner to Hog Coaches: “You Better Turn It Up.”

He knows that the games this November could make or break the program during the Chad Morris era. “The next four weeks will be a tell-all month for this coaching staff and for the organization and the program at Arkansas,” he said in early November on the Buzz 103.7 FM. “You better turn it up, you better show some goods, or it’s going to get hot quick over there in Fayetteville.”

With tens of thousands of fans clamoring for Morris’ firing, it’s already hot.

It’ll get much, much hotter if Arkansas loses both of its remaining winnable games against Western Kentucky and Missouri. Despite the Hogs’ 2-6 record after recent blowout losses to Alabama and Auburn, Stoerner saw a few silver linings.

“The offensive game plan is really good. They’re finding a way to get 5 [Rakeem Boyd] and 85 [C.J. O’Grady] touches…. To the common eye it appears that the plan is bad, and that the effort by the players is bad. In reality, if you just get a little bit better play at quarterback you’re sitting at three or four wins right now with three of the next four very winnable football games — if you don’t turn the football over.”

Of course, turning the ball over at the quarterback position has been the team’s bugaboo this season. Nick Starkel has thrown 10 interceptions, the third most in the nation.

Starkel, along with fellow graduate transfer Ben Hicks, are completing just 53.1 percent of their passes for 6.3 yards per attempt with nine touchdowns and 11 interceptions.

“When you look across the landscape of football in general, at all levels, just the consistency at the quarterback position, when you have that, a lot of things line up for you and allow you to have success,” Chad Morris said. “When you’re not as consistent, there’s a lot of things that suffer.”

“Despite being brought in by the coaches staff to fix the quarterback position, [Starkel and Hicks] have worse numbers through eight games than the players they replaced. Ty Storey and Cole Kelley had completed 55.8 percent of their passes for 5.9 yards per attempt with 19 touchdowns and 10 interceptions at this point last season.”

“Is Nick Starkel’s fault? Or is it the fact that he’s not being coached and developed in the right direction?,” Stoerner asked on his weekly Buzz 103.7 segment. “I don’t know. I’m leaning toward the quarterback just isn’t making good decisions, he’s lost his confidence, because he’s the guy that’s been in college for four years. If he needs the kind of development between the ears to execute the routes that I’m talking about properly, then we’re way behind the eight ball from a development standpoint and things have to change.”

For more on Chad Morris’ buyout situation, check out this post: