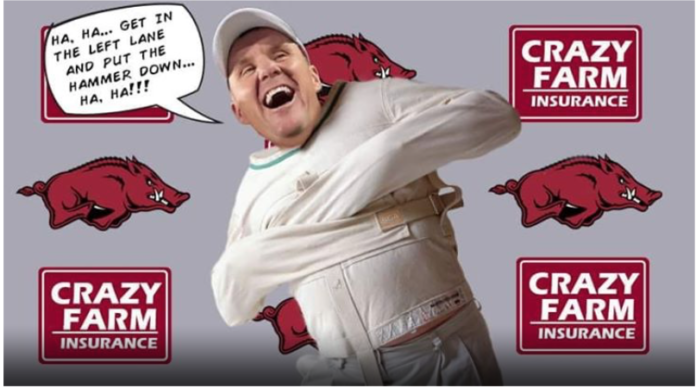 The time for sugarcoating is over.

Earlier this year, after the San Jose State debacle, there was a way to spin things positively. The Hogs had played a great game the week before, and the next week came back strong in a close loss to a Top 25 squad in Texas A&M.

Aside from San Jose State, you could make a case that the Razorbacks were trending upward. And UA athletic director Hunter Yurachek made just that case when explaining what defined football “success” for him.

Well, those days are long gone.

For the fourth straight game, Arkansas was annihilated. More damning, they essentially lost the game by half time in front of a home crowd for the second consecutive week. Most damning of all, they lost to a mid-major team led by Charleston, Ark. native Ty Storey, the former Hog quarterback whom Chad Morris had replaced with a failed transfer in Ben Hicks.

Storey led Western Kentucky to a 35-7 halftime lead on the way to a 45-19 win that should close the door on the Chad Morris era once and for all. In the month and a half since losing a close game on the road to Kentucky, Arkansas has descended into a state of terrifying ineptitude on both sides of the ball. This is the second time this kind of tailspin has occurred at the end of the season during the two-year-long Chad Morris era.

The habitual regression of the program during November in both months is the final and most powerful sign that the Chad Morris era at Arkansas needs to end soon. Whatever the cost in terms of losing “momentum” and paying extra millions in buyout money is outweighed by the benefit of starting with a clean slate — with a head coach who is not in over his head at the SEC level (or washed up like John Chavis has been as the defensive coordinator).

“We thought we could get off to a quick start,” he said. “We just needed some confidence. A little bit of momentum early on. And we didn’t. And we get called for holding on the first play of the game and just kind of puts us behind the sticks. We turned the ball over.”

On Treylon Burks and KJ Jefferson

Chad Morris: “With KJ, I was pleased with the way he responded. Did not know if he was going to be able to go in the second half with his shoulder. But he overcame that and was able to fight through. And played hard. A young guy that’s growing up and growing up the hard way right now.”

On Rakeem Boyd going over 1,000 yard on the season:

Chad Morris: “Well it was good to see that. I thought did a great job with his vision and seeing, staying inside the tackle box and making the safety miss out on the second and third level. And that was good to see right there. And help when he can. And the message was we just could never overcome not being able to get off the field.”

Chuck Barrett then thanked Morris for joining him, before adding some positive notes: “You do hope that the young guys like Burks that we saw playing to the end. And Jefferson. You hope that there are dividends down the road. Sometimes you see teams play a lot of guys their first year and they’re not any good at all.”

“By the time they’re juniors, you got a good football team. And there’s just not much to hang your hat on right now, but I think if you’re a Razorback fan, just the way the the freshmen play. You hope that you got something to show for that down the road.

Yes, Arkansas has a few very talented young players who could become All-SEC and NFL early-round type players. But the combination of the end of the 2018 and the end of this season show that Morris is not the right coach to maximize their talents — in a team setting — at Arkansas.

Watch what could be Morris’ final Hogs press conference here: