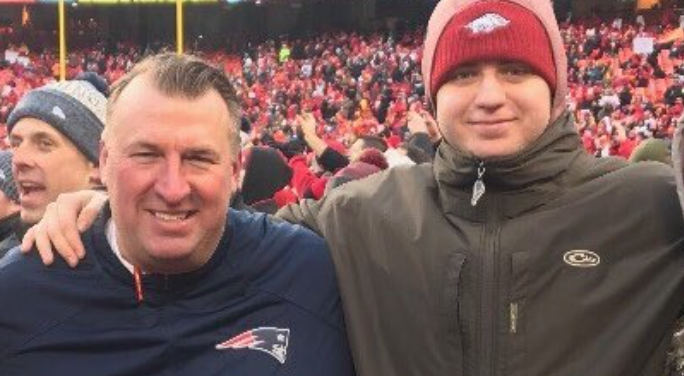 Bret Bielema and Arkansas didn’t part on the best of terms.

In these last couple of years, while the Arkansas football program just kept cratering, Bielema would occasionally do something like Tweet congratulations at a former player that made Hog fans think: “Well, at least he was a nice guy.”

No more of that.

Today, Bielema filed a lawsuit against the Razorback Foundation for about $7.7 million, claiming they reneged on a $12 million buyout he and the Hogs worked out after the firing.

The sticking point is that in order to receive the full $12 million paid out in installments of $320,833.33 per month through December 2020, Bielema would need to have stay unemployed and keep looking for work that entire time.

“If Bielema landed a new job, the amount his employer paid him would be deducted from the amount Arkansas owed him. This offset would cover not only a full-time job but any income derived from consulting fees and honoraria,” as sports lawyer Michael McCann points out.

Starting in 2018, Bielema took assistant jobs in the NFL, beginning as a “football consultant” for the New England Patriots.

It’s not known how much Bielema has earned working as an assistant for the Patriots, and now the New York Giants, but it’s safe to assume it’s in the hundreds of thousands if not millions.

The Razorback Foundation paid Bielema about $5 million, but when it was reported that Bielema was working for New England, they stopped the payments.

Bielema now claims that the Razorback Foundation made “calculated, bad faith efforts to renege on its contractual obligations.”

The rest of Bret Bielema’s lawsuit against the Razorback Foundation has been filed. It doesn’t mince words. Accuses the Foundation of “calculated, bad faith efforts to renege on its contractural obligations.” pic.twitter.com/Zi46533acr

And here is the cover sheet of the lawsuit:

How has the Razorback Foundation responded?

Marshall Ney, a lawyer for the Razorback Foundation, told the New York Post:

“What I can share at this point before digesting the entire document is that the Foundation previously demanded that Bret Bielema return the $4,555,833.29 that had been paid to him prior to the Foundation’s discovery of his multiple material breaches of the agreement. It appears that Bielema filed suit in order to avoid being sued.”

Although some settlement is likely, Hog fans hope that Bielema doesn’t walk away from this with too many millions of dollars.

If so, he will do even further financial damage to an athletic program he already hurt with those subpar 2016 and 2017 seasons.

For one, the Hogs are already on the hook for a buyout with Bielema’s successor Chad Morris. The UA was to pay Morris $2.45 million per year for the last four years of his contract, but his Auburn salary offset means Arkansas will owe Morris about $1.715 million per year.

On top of that, the coronavirus has hurt the bottom lines of all college programs by wiping out the end of the financially lucrative basketball season and all of the baseball season.

“We’ve done a great job with our foundation and the department of athletics will supplement that budget shortage toward fall this year,” Arkansas athletic director Hunter Yurachek said in early April on The Paul Finebaum Show. “We’re planning anywhere in the neighborhood of 5 to 10 to 15 percent potentially in loss of revenue as we head into the 2021 year and that’s with playing a football season.”

If the Hogs must play in stadia that aren’t filled to capacity, as seems likely at this point, the shortfall would be even more.

This case will likely take months and ultimately end in a settlement.

One likely argument that the Razorback Foundation will make is “to claim that Bielema, knowing Arkansas was on the hook to pay him millions of dollars and knowing about the offset provision, took advantage of the circumstances to secure a high-prestige, but relatively low-paying position with the Patriots,” lawyer Michael McCann writes in Variety.com.

“Attorneys for the Foundation might assert that Bielema was paid substantially less by the Patriots than what he would have earned with other NFL teams. In effect, the attorneys would argue that Arkansas was subsidizing Bielema’s Patriots employment.”

“The strength of this argument would depend on salary data and expert testimony,” McCann continues. “If persons who held similar jobs with other NFL teams earned considerably more than Bielema, the Foundation could more credibly contend that Bielema failed to make ‘best efforts’ to ensure he was paid market value.”

For more about what Bielema did as a “football consultant” for the Patriots, see the below published on January 22, 2019

Bret Bielema’s dream was always to compete at the highest levels of football.

In college, as Wisconsin’s head coach, he never could quite break through, though. Sure, he got close a few times — and even went to three straight Rose Bowls. But the Badgers never played for a national title.

So, then, he went to the SEC, the conference that produces the most national champs. Bielema planned to bring Wisconsin-style bully ball to Arkansas.

“But you just couldn’t do the same thing over again,” he found out. “It’s a different environment, a different culture….”

Bielema lasted five seasons in Fayetteville. After losing 34 of 63 games, he was fired. Within months, however, he found himself employed again — this time as a consultant to Bill Belichick, head coach of the New England Patriots.

The Patriots, improbably, punched a return ticket to the Super Bowl after an electrifying win at Kansas City. This means, at last, Bielema gets to compete at the highest level of football — even if it’s not in the college setting as he had always imagined. And even if it isn’t so much as due to the genius of his own strategy as grabbing on to the coattails of the greatest quarterback of all time.

Fourteen months ago, after a devastating loss to Missouri, Bielema wasn’t even sure what he would be doing this season.

After that Mizzou loss, Bielema was pulled aside in a side room outside of the main locker room. He knew what was coming. The writing had increasingly been on the wall since his former boss, Jeff Long, had been fired nine days before.

“That was a very difficult time,” Bielema recalled on Sports Talk with Bo Mattingly. “But our kids fought, they competed, they battled. It obviously didn’t work out the way we wanted.”

Six Key Questions about the Arkansas Offense in 2021