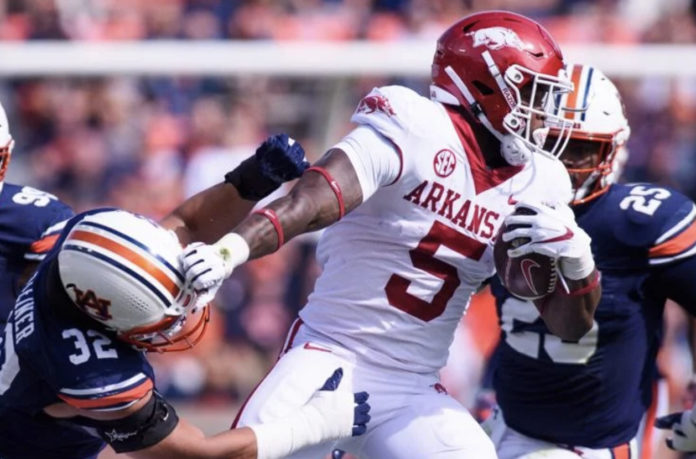 Make no mistake, Arkansas’ game Saturday against Auburn was important. The Razorbacks were supposed to be a better team than the Tigers, what with Auburn’s disastrous situation with coach Bryan Harsin and the news the school was on the verge of getting a new athletic director. But it was far from a given that the Razorbacks would win the game. Both teams were 1-3 in the SEC, after all, and Arkansas’ defense hadn’t exactly been, well, good.

Sam Pittman would not have been in danger of losing his job had Arkansas lost to Harsin and the Tigers, but the fringe elements of the Hogs’ fan base would have begun to grumble more loudly. Instead, Auburn fans are all aboard the Fire-Harsin train, Pittman earned his first win over one of the Alabama teams since becoming Arkansas’ head man and the Hogs won their first at Auburn since 2012.

Saturday’s victory was much more than that, though. Short-term, it’s great. But even Pittman admitted the magnitude of beating Auburn was massive, enough to say “to come in here, it means everything. It means a lot.” It means Arkansas is now 5-3 and in exactly the same place the Razorbacks were at this point last year, a year in which they won nine games and had their best season since 2011.

“No disrespect but (the win) means more. It gets us up,” Pittman said. “You want to see where you fall in the league. Helps in recruiting. All kinds of different things. Yes, coming into a place that holds 90,000 people or whatever it is, able to win against a good team, means a lot. Sure does.”

Something about the win felt different besides that, though. Maybe it’s the Pittman factor. This year’s Arkansas team, in many ways, isn’t as good as last year’s. Obviously the loss of Treylon Burks has made a difference. This year’s secondary isn’t good, either, though it was much better against Auburn, a result of getting healthy, Pittman said.

Still, the fact that the Razorbacks are at this juncture is significant, given the path the Hogs have followed to this point. Consider it.

After three games, Arkansas was enjoying its second consecutive year of getting to enjoy being a national darling early on. Like last season, they cracked the Top 10 in the rankings. They beat two now-ranked teams in South Carolina and Cincinnati. They exacted revenge in the person of Bobby Petrino.

Then, one play changed things in a hurry. KJ Jefferson’s fumble at the goal line against Texas A&M stood to be the harbinger of things to come. Arkansas ultimately lost that game – albeit by just two points – then fell, unsurprisingly, against Alabama, and was finally demolished by Mississippi State. Had the Hogs beaten A&M, the last two wouldn’t have mattered all that much. Or had the Hogs played MSU well, even with a loss, the rumor-mongers wouldn’t have started their blathering about Pittman’s lack of ability.

That was always crazy. Pittman’s teams take on his persona. We should have known, all of us, Arkansas wouldn’t be down long. The BYU win wasn’t pretty defensively, but the Rocky Mountains are no joke and the Cougars are a good team. Auburn isn’t as terrible as Tigers fans think, either. They just aren’t the Auburn those fans want them to be.

The Razorbacks are winning with grit, grime, toughness, big plays, play-calling. It’s a complete package. What’s hurt is the lack of depth, a product of both injury and shoddy recruiting in the Chad Morris era.

The toughness? Arkansas’ secondary, the biggest culprit in the defensive liabilities this year, is getting back to a healthy status. Four of the six previously injured players back there, including the standout Myles Slusher, played against Auburn. The other two are out of the season. They gave up just 236 yards through the air until garbage time.

The grit and grime? The Hogs’ offensive line. Not only does Arkansas have the ninth-ranked rushing offense in FBS, but entering Saturday, they’d only allowed 11 sacks. Pittman said the Razorbacks won the way they won because Arkansas’ offensive line simply wore down Auburn’s front seven.

“Our guys are in great shape up front,” he said. “They play well together. We went back to bread-and-butter. Inside-outside zone. Ran a little counter against them. We ran what we do.”

The big plays are obvious. They get the pub. Arkansas entered Saturday in the Top 20 in FBS in plays that result in gains of 20, 30, 40, 60 and 70 yards. Rocket Sanders’ 76-yard scamper Saturday set up Rashod Dubinion’s first touchdown of the day and provided the Razorbacks with an 18-point lead in the third quarter, basically sealing the game.

And the play-calling? You wanna talk divisive, talk about Arkansas’ offensive play-calling. The old-school types were still going off on Twitter, talking about how Kendal Briles calls running plays from out of the shotgun. Someone needs to tell these folks that’s how football is played nowadays, whether they like it or not. The Hogs were 7 for 7 in the red zone against Auburn on top of it.

Arkansas vs Liberty On Tap

But fair or not, Pittman would have been feeling the pressure had Arkansas not won that game. A 4-4 Arkansas team might have been picked to lose to a 7-1 Liberty team next week even at Donald W. Reynolds Razorback Stadium. Can you imagine? Former girls high school basketball coach Hugh Freeze comes back to Arkansas with a program less than five years out of FCS football as a favorite and then leaves DWRRS with a win? Mercy me.

Now it won’t happen. Liberty remains a good football team, no question. It’s just that, after Saturday’s easy win over Auburn, Arkansas shouldn’t have anything left to prove. Not really. They’re exactly where they were widely expected to be at this point in the season. And Pittman is to thank for it.