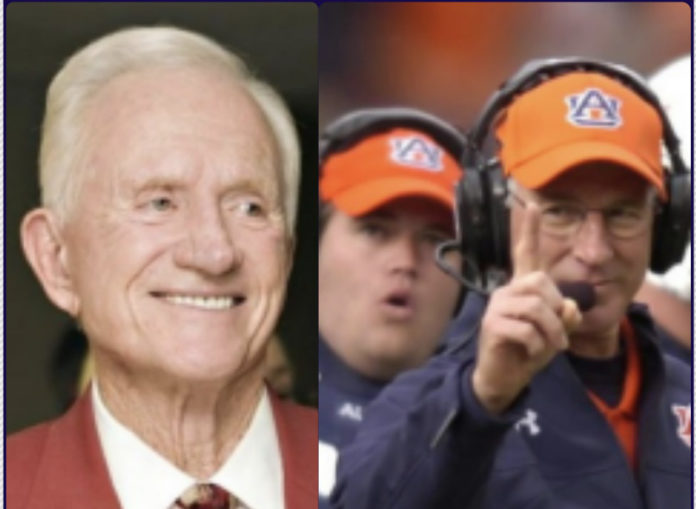 The Auburn football program has had a way of fairly quickly tossing as its coaches over the course of the last 30 years but the two longest-tenured in that era were both native Arkansans. Gus Malzahn (8 years), of course, and Tommy Tuberville, who lasted an entire decade from 1999 through 2008.

In that period, the Razorbacks enjoyed as good of a decade as they have ever had against Auburn, winning half the games. Houston Nutt, also an Arkansas native, was the Hogs’ head coach for most of them. Nutt’s tenure at Arkansas, as polarizing as it became toward the end, remains unquestionably one of the most memorable in program history.

And yet it almost didn’t happen. It was nearly Tuberville who ended up prowling the sidelines at Donald W. Reynolds Stadium instead of Jordan-Hare Stadium.

Frank Broyles, the former athletic director at Arkansas, fired Danny Ford in 1997 and wanted his replacement to be Tuberville, a Camden native who had been an assistant under Larry Lacewell at Arkansas State and later coached under Jimmy Johnson at Miami, according to Arkansas sportscaster Mike Irwin.

At that point, Tuberville was coming off a winning SEC Coach of the Year with a 8-4 record in his third season as the head coach of Ole Miss and was clearly a rising star.

But this wasn’t going to be Broyles’ choice alone. John White, the Arkansas chancellor, told Broyles he had to use a hiring committee, Irwin said on “Ask Mike.” The committee included former Razorbacks like Bill Montgomery who would share their opinions on top candidates.

The committee eventually settled on its top two candidates in Tuberville and Houston Nutt, who was then at the helm of Boise State (where he’d coached current Auburn football coach Bryan Harsin).

During this process, Irwin says that Tuberville agreed to meet with Broyles in New York City during the events around the Heisman Trophy presentation. The hope was that nothing about their back channel talks would leak.

“From what I was told, they’re in the same hotel, Irwin said. “One of them is in a floor above the other one. Frank just goes out of his room, gets on an elevator, goes up, knocks on the door” and that night they agreed, in principle, to Tuberville taking the Arkansas football job.

Money as a Sticking Point with Tommy Tuberville

As Irwin best recalled, Broyles and Tuberville verbally agreed to $500,000 a year. For some context on how much times have changed in the intervening 25 years, consider Arkansas offensive line coach Cody Kennedy surpassed that amount this past off season when he got a $300,000 raise to $700,000 per year. Nearly half of the assistants make at least $500,000 a year now.

Tuberville, however, didn’t want to go through the rigamarole of talking with the Razorbacks’ hiring committee and trying to impress them. Essentially, he told Broyles “If you want me, hire me; otherwise, don’t hire me, but I’m not coming up and interviewing for a job because I don’t need it that bad,” Irwin said.

Broyles tries to figure out a way to smooth out the situation, possibly get the committee to talk to Tuberville in private, but in the following days word gets out among the Ole Miss boosters that Arkansas is trying poach their coach. The Rebels upped their offer to Tuberville to $750,000 a year.

Tuberville then told Broyles about the offer and let him know “if you could at least match the offer, then I’ll still come,” Irwin said.

But Broyles didn’t want to get into what he envisioned as a never-ending negotiating war. His thinking was, according to Irwin: “I’ll offer him this. He gets more from them, I have to offer him more, and this could get out of control.” So Broyles decided to give up on trying to win over Tuberville and simply didn’t call him back.

After some waiting, “Tuberville is now nervous, because he really wants to come to Arkansas,” Irwin recalled. “He eventually called him back and said, ‘Hey, I’ll come. I just wondered if I could get more money.'” (a tactic Gus Malzahn would use well many years later at Auburn).

But by the time that Tuberville showed his hand, it was too late. The committee had mostly fallen in love with Houston Nutt and Broyles had fallen under the Little Rock native’s spell too. The vote was inching toward unanimity. For a while, the lone holdout for Tuberville was Bill Montgomery but, “finally — and the story varies here — he either snapped his pencil in half or slammed it on the table, and with exasperation and exhaustion he made it unanimous,” longtime sports columnist Wally Hall wrote.

Arkansas would flirt with hiring Tuberville again, primarily after the 2007 season following Nutt’s departure, but the native son never coached in Arkansas again. If anything, as a U.S. senator representing Alabama, he’s gone even farther away from state.

Along with Bear Bryant, Gus Malzahn and Mike Leach, Tuberville remains one of the most tantalizing legitimate “could-have-beens” in Razorback coaching history.