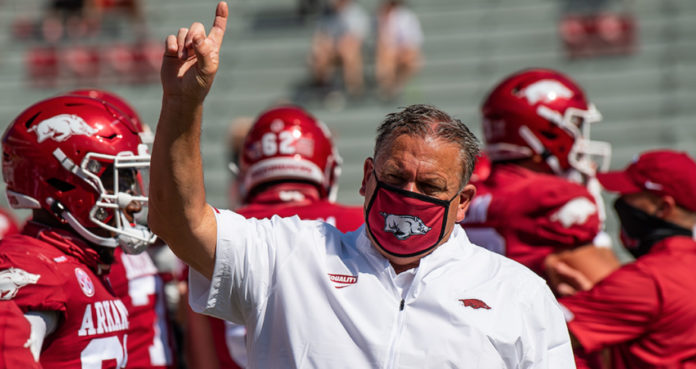 Arkansas is going to improve in Year 2 under Coach Sam Pittman.

There has been too much development last season and throughout spring and summer not to believe that the Arkansas football program will continue an upward progression from its 3-7 record in 2020.

However, the big question is, ‘Will that be reflected in their record?” That is certainly a valid query considering most pundits — like ESPN’s Bill Connelly below — believe Arkansas has the toughest schedule in the SEC and one of the tougher in the country.

I’m a firm believer this team will be bowl eligible and maybe win a few games they aren’t supposed to. Below the Tweet is my game-by-game path to a bowl for the Razorbacks.

The Owls improved last season under fourth-year Coach Mike Bloomgren and return nine offensive starters, including part-time starter and Conway native quarterback Jovoni Johnson. However, they haven’t seen anything like the Hogs’ defense.

Arkansas forces turnovers and Hogs QB  KJ Jefferson leads the Hogs to some easy scores, and Arkansas rolls in a hot and steamy early afternoon contest.

I’ve called this upset since the spring. But is it really an upset? The No. 19 Longhorns have to beat Louisiana-Lafayette, who won at Iowa State in the opener last fall, a week before heading to Fayetteville. This game will come down to the fourth quarter, and a success-starved crowd will take over in this nationally televised tilt.

The Hogs score in the fourth quarter to take the lead and the defense holds off a late drive to secure the win and create a national buzz that hasn’t been heard in Fayetteville for a while.

The Hogs suffer a bit of a hangover after the Texas win and find it a bit difficult dealing with Georgia Southern’s triple option attack. However, after a close first half, Pittman gets his team’s attention in the locker room at halftime and Jefferson promptly leads Arkansas on a long scoring drive and the threat is over.

Count this as another ‘close but not quite” loss by Arkansas in this series which is once again played at Arlington, Texas after a detour to College Station last season. The Hogs defense holds the Aggies to three field goals and leads 24 to 21 in the fourth quarter, but A&M kicks a long field goal to tie the game and then embarks on a late drive score the go-ahead touchdown moving its win streak to 10 games.

The Bulldogs are rolling and the Hogs can’t stop them in Athens. The offense is too potent and Arkansas can’t keep up.

Hogs defensive coordinator Barry Odom baffled Ole Miss quarterback Matt Coral with his drop eight defense a season ago causing six interceptions. That has stuck in Corral’s craw ever since. The QB spent the offseason improving in that aspect.

On this day in Oxford, he gets his redemption as his offensive line provides him protection, and he is able to pick the Hogs’ defense apart. Jefferson and receiver Treylon Burks put on a show in a homecoming for Jefferson, but this day belongs to Corral and Arkansas’s season is hanging in the balance.

Back in Fayetteville, Arkansas rights the ship against a Tigers team which is also struggling under first-year Coach Bryan Harsin, who spent a season at Arkansas State. The Hogs defense flexes its muscle and contains the Tigers, and the offense once again lights up the board to get the season back on track.

On a beautiful, late fall afternoon in Little Rock it won’t be the game everyone talks about but the awesome tailgating crowd before the game and UAPB’s band lowering the boom at halftime.

Make sure you don’t head back to the abandoned golf course party until they’re finished performing. You will thank me later.

The Air Raid keeps the Bulldogs in it, but the Hogs force turnovers in the second half to preserve the victory and ride a three-game winning streak.

Not a fun day in Baton Rouge as the Hogs’ offense sputters early and often. LSU seizes control of the game in the second quarter when the Tigers defense rescores a pick-six.

And this is why Arkansas’ schedule is the toughest in the country. Who else winds the schedule down with two conference powers on the road? The Crimson Tide dominates, as expected, even though the Razorbacks score on the game’s opening possession.

KJ Jefferson lit up the Tigers a season ago directed a go-ahead drive late only to be stunned by a late field goal. The Hogs return the favor this year on the day after Thanksgiving.

Save a celebratory turkey leg for this one.

With a 7-5 record, the Razorbacks get to go bowling for the first time since the 2016 Belk Bowl.

This time around, they head to where they should have gone last season — the Texas Bowl. Their opponent, coincidentally, is TCU, whom they should have played at the end of the 2020 season were it not for COVID issues.

The last time Arkansas played in the Texas Bowl, the Hogs romped all over Texas by the score of 31-7 to end Bret Bielema’s second year. The score will be closer this time around (24-10) but the result will be same: Delirium coursing throughout Razorback Nation to cap a beloved Arkansas football coach’s second season.

Expect the following years to go a lot better under Sam Pittman than they did under Bielema.