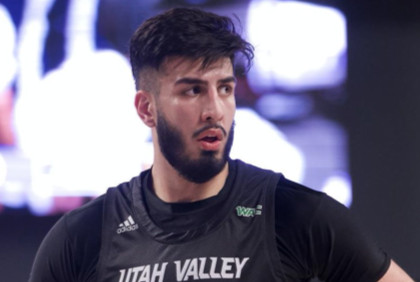 History – as we know, and as many of us have lived – repeats itself.

Thirty two years ago, a young, gritty Arkansas basketball team started the NCAA Tournament as a No. 4 seed before shocking the nation and reeling off four wins before falling in the Final Four to Duke. In the following championship game, former Razorbacks coach Nolan Richardson watched as Jerry Tarkanian’s Runnin’ Rebs wiped out Duke and its insufferable fan base by 30 points.

It worked. The next season, Arkansas beat Duke in the preseason NIT and four years later did it again, this time to cut down the nets in Charlotte, N.C. as confetti rained down and Hog calls reverberated across the nation.

Now, we see Eric Musselman following suit. With his No. 4 seeded Arkansas basketball team recently knocked out of March Madness by Duke, Musselman and his staff are aggressively addressing the deficiencies of a 2021-22 team that had to give everything it had to knock off giants like No. 1-seed Gonzaga.

What Arkansas Basketball Needs in 2022-23

While a lack of a pure point guard didn’t hurt through much of that last couple months, the Hogs needed one in the Elite Eight. So Musselman got blue chip Anthony Black, a 6’7″ pass-first guard who was among the best unsigned recruits left when he announced his decision on Monday night.

In 2022-23, he will also have elite combo guards at his disposal like freshmen Nick Smith Jr. and Derrian Ford, and a veteran in Devo Davis who will likely be itching to prove himself after a disappointing sophomore season.

For most of the season, college basketball fans were amazed to see Arkansas win so many games despite shooting so poorly from the three-point range. Even as the defense carried the Razorbacks to win after win, there was always a lurking feeling that the other shoe was bound to drop. Modern college basketball teams simply don’t win national titles shooting 30.7% from deep.

Shooting from deep shouldn’t be as big of a problem next season. Among the incoming recruits, Nick Smith and especially Joseph Pinion are great shooters from deep. The others may not be as accomplished from outside, but they have shown enough ability in high school to become more than adept in college. Most of the five top 100 recruits can create their own shots, too.

Of course, Musselman has been working on getting this elite class for most of three seasons he has been at Arkansas. His persistence has paid off as he has has been figuring out what the Hogs have consistently lacked and how to address that. “He’s already ahead of the curve, trying to make sure that next year and the year after, he doesn’t have those issues,” Irwin says.

The Hogs could use an experienced, strong and defense-first point guard from the transfer market, but that need isn’t as severe with the arrival of freshmen like Anthony Black and Derrian Ford. Ford isn’t as long as Black, but he will be as physically strong as any freshman point guard in the conference and has the talent to help alleviate the potential loss of J.D Notae. Plus, while Nick Smith Jr. is making 2023 NBA Draft boards as a lottery pick largely because of his offense, don’t underestimate the damage his awareness, quick hands and 6’9″ wing span will do on defense.

All things considered, the Hogs’ biggest need – both literally and figuratively – is interior help for 6’10” Jaylin Williams. He needs a bruiser and tag team partner inside who can help against the athletic twin tower lineups that an elite team like this year’s Duke can deploy.

Fardaws Aimaq: Shaq of the ‘maq?

That’s why Musselman and his staff are on the hunt for big forward and center transfers. They got a a big one on Wednesday with the commitment of Missouri shot-blocker Trevon Brazile, but they want more. On Tuesday, they met with who many consider the top true center the transfer market – Fardaws Aimaq, a 23-year-old 6’11”, 245 pound who immediately checks a few of the boxes of what Arkansas needs to break through and win a national title.

The former Utah Valley standout had been one of the best mid-major interior defenders in the nation, winning back-to-back Western Athletic Conference Player of the Year awards (he was also overall player of the year last season). Aimaq averaged 18.9 points, 13.6 rebounds and 1.2 blocks as a redshirt sophomore this past year.

What should make Arkansas basketball fans salivate even more is that he trimmed his body fat from 18% to 8% over the course of two seasons to become an accurate three-point shooter (43.5% from deep). That opens up all kinds of pick and pop potential with Nick Smith Jr. and, if he returns, J.D. Notae.

Of course, the Hogs have some pretty stiff competition for Fardaws Aimaq’s services. Kentucky, Texas, Texas A&M, Florida, Gonzaga, Oklahoma and Texas Tech are among the other top programs gunning for him. “So far I’d say Maryland, Texas Tech, Gonzaga, Kentucky, Arkansas, and Houston have been prioritizing me the most. Those coaching staffs are calling me daily, often multiples times a day” Aimaq told Inside the Red Raiders on 247Sports [paywall].

Aimaq is looking for trust with the coaching staff and a good fit on both sides of the court. “Being surrounded by players that make me better is also important,” he told Inside the Red Raiders. “I’m going to draw a lot of double teams so having shooters that can capitalize when I’m doubled will benefit the team.”

Next season, Arkansas will likely have two, potentially three, players who would demand consistent double teams in Nick Smith Jr., JD Notate (if he returns) and Jaylin Williams if he hones his offensive game. The prospect of adding another player who demands double teams, combined with offensive rebounder extraordinaries like Jordan Walsh and Au’Diese Toney (if Toney returns), would be too much for most opponents to hope to handle defensively.

As recently as a week ago, Aimaq was considered the top player available in the college basketball transfer market (which had 481 players as of Monday). 247Sports’ Travis Branahm ranked Aimaq as No. 1 in his initial Top 10 ranking.

However, The Athletic’s Sam Vecenie strongly disagrees. Vecenie puts Aimaq at No. 13, writing: “Utah Valley loved to get him involved out top with dribble handoffs, using him to activate his guards on the move. They’d roll him into post-ups and get him the ball throw it up off of the offensive glass.”

Then Vencenie explains the downside: “The main issue with Aimaq, though, is his touch. He only made 42 percent of his post-up attempts, per Synergy, despite a significant size advantage in the WAC. Additionally, he made just 61 percent of his shots around the basket in non-post settings.”

“The worry here is that he may smoke a few too many lay-ups at the high-major level, while also getting hit away from the basket defensively because his foot-speed isn’t awesome. He’s a high-major starting center who will clean up the glass and probably average a double-double, but he’ll need to find the right situation in order to impact winning.”

This isn’t the best news in the world for Arkansas basketball fans after seeing so many missed layups around the rim this year, but perhaps Aimaq’s strengths (and literal grown-man strength) would make up for it.

Learn more about the big man that some Iowa fans are comparing to Luka Garza:

According to Arkansas transfer expert Ben Brandon, Musselman and his staff have contacted at least 31 players in the current transfer market. Besides Aimaq, here are the big burlies he lists:

Quinn is by far the most accomplished of the trio listed here after averaging 14.7 ppg, 7.4 rpg and 4 apg on 54.5% shooting last season.

College basketball analyst Aaron Torres delivered some eye-opening praise for the Razorbacks under Eric Musselman in his podcast that came out following Black’s announcement.

“I believe that they do as good of a job as anybody in college basketball, evaluating in the transfer portal…. You look at a Texas, you look at a Kentucky – some schools are just going after the best players that they can possibly get. I think what Arkansas does better than anybody, they look at players and they look at pieces, and they say, ‘How will this guy fit with that guy, and that guy, and that guy, that are coming back?'”

“Au’diese Toney, Chris Lykes, Trey Wade last year. I think I did a top 50 in the transfer portal rankings, I don’t think any of them made my top 25 in terms of who I expected to be impact players, but those three individually [did well]… I think Stanley Umude was right on the cusp of top 25, top 30, but you look at those guys, and they weren’t guys that jumped off the pages, ‘Oh my God, they’re going to be instant impact players at their next stop.’ The way that Walker Kessler was, or what we thought Marcus Carr would be, or what we thought James Akinjo would be, or what we thought Remy Martin would be.”

Make sure to watch the rest of Torres’ breakdown here: