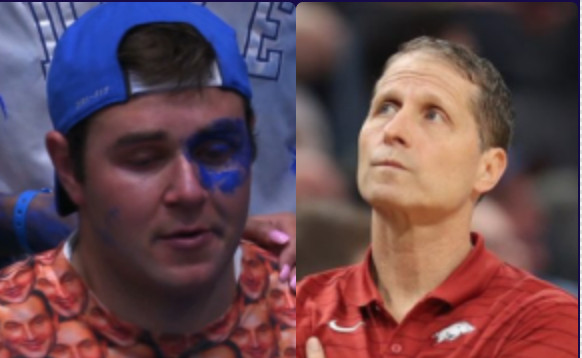 Pity the poor Duke fan. Raised from birth to expect an unbroken string of wild success, the Duke basketball fan was grievously unprepared for the expanse of mere excellence that their chosen team experienced between 2016 and 2021. Imagine: a run of five straight NCAA tournaments in which Duke did not make a single Final Four!

The Duke fan, like a shipwrecked sailor, turned to desperate measures to maintain his sanity. The Duke fan sashayed onto Twitter to argue down anyone who suggested Elon Musk, the richest man in America, ought to pay a bit more in taxes. The Duke fan cheered when Exxon hit its quarterly earnings projections. The Duke fan rewatched “Rocky IV,” but only through the second act, to see Drago demolish Apollo Creed, the Duke fan’s version of a happy ending. See, it doesn’t matter whether America roots for you or not — the odd-on favorite CAN overcome! Dreams do come true!

The Duke fan on Saturday night had the unenviable chore of rooting, once again, for the Death Star. Being a Duke fan, they clapped hands and stamped feet for every rim-tickling layup Arkansas missed, every ticky-tack call against JD Notae. Once the Blue Devils made it official, the Duke fan had to look around for high-fives and see that no one cares that Krzyzewski made it to a (record) 13th Final Four.

Undeterred, the Duke fan begins waxing about how no one thought they could do it again. Who would’ve predicted? Nothing’s assured anymore, not even when you play a seven-man rotation that contains four players projected as first-round draft picks in June. The Duke fan ordered another scotch-and-soda for their one-person watch party and thought back fondly to the scrappy 2015 bunch who beat Wisconsin for the title with merely eight future NBA players on the roster.

Duke may reward its fans next week with another win or two, which would once again put the national title in “entitled.” Either way, it’ll be a fare-the-well to Mike Krzyzewski, the all-time leader in wins by a college basketball coach with more than 1,200 wins. Of those 13 trips to the Final Four, he won national titles on five. He also boasts a record of 75-1 as the head coach of USA Basketball. The Duke Blue Devils, the U.S. Olympic team … seems that whichever established power Coach K takes over becomes even more powerful and ever more established.

You can’t even imagine the pressure those guys are under, the Duke fan says. It’s hard to keep winning when everyone is gunning for you every night and you’re supposed to win the title, you know? Why, it’s so much pressure that having so much talent is almost a curse, you know? Except no one appreciates that.

Listening to this, the Arkansas fan folds a final, empty can of Bud Heavy in half and nods sagely. It’s true. The Duke basketball fan is right. No one can appreciate what it’s like to root for an NBA farm team whose players sluice through so quickly you barely learn their names. And it’s easy to be annoyed by the Duke fan, who regards every season of mere excellence as a personal slight. I for one wouldn’t wanna be him. But I’m also glad he’s at this party, even when he wins. The sport is simply more fun with the Duke fan’s bad-vibes-only energy.

Arkansas in particular has been able to mark its progress by the tempo Duke has set. Hogs fans of a certain vintage will remember the 1990 Final Four as a watershed. That year the No. 4 seed Hogs had a veritable glide path through the Midwest Regional, never facing a seed higher than 8 on the way to advancing to the Final Four in Denver. There, a Duke team led by Christian Laettner and Bobby Hurley knocked off the Razorbacks’ sophomore trio of Todd Day, Lee Mayberry, and Oliver Miller before getting trounced by UNLV in the final. The Hogs were good that year, if a rung below Duke. A rematch win over Duke in the Preseason NIT eight months later took off some of the sting and presaged greater things ahead.

In Arkansas’ next trip to the Final Four, led by a new sophomore tandem of Corliss Williamson and Scotty Thurman, there was Duke once again, this time in the final. In the four seasons since Duke and Arkansas’ previous meeting, Duke had won two national titles to go with their national runner-up. It was led by Grant Hill, who was about to become the third overall pick in the NBA Draft and next season’s co-Rookie of the Year. Mike Krzyzewski wore the kind of scowl that suggested he spent every game sucking down a bag of Warheads.

National media picked Duke on the premise that its players were “smarter” than Arkansas’, which Nolan Richardson correctly pointed out was just a way of saying “whiter.” There was, in 1994, no team that would be more gratifying to beat than Duke, with the possible exception of reigning national champion North Carolina. But they, too, align themselves against Duke at every turn, so ipso facto, they ain’t all bad.

Since 2022 wasn’t so long ago, just think back a short distance to how much more hyped you got to play Duke than you would have to play Texas Tech, or even Michigan State. Duke turned out to simply have more talent and size, a terrific shooting touch, and a game plan that didn’t require any stunts or heroics. The Devils are awfully good. But for a moment there, Arkansas was America’s team, because of the teams Duke was likely to face — North Carolina, Kansas, possibly Villanova — fans everywhere knew that a loss to Arkansas would wound the Duke fan most deeply. Now that the Duke fan gets to buy yet another round of Final Four swag, America knows the opportunity was lost. In this Final Four, stacked with multiple-title-winning programs, underdog America is out of champs. Krzyzewski will finish his unparalleled career a very respectable 2-2 against Arkansas.

Where the Duke Basketball Hits the Bullseye

The Duke fan is right about one thing: No one much cares what the Duke basketball fan goes through, because it’s hard to care about any sort of Duke win. Sports are optional entertainment, easy to avoid if they’re boring, and they can be boring in several different ways. Arkansas basketball was pretty damn boring during that, uh, twenty-five-year stretch when the Hogs didn’t make a Sweet 16, aside from the occasional Michael Qualls trampoline slam-dunk or surprise SEC tournament title run. It’s also profoundly boring to see the Blue Devils (and the Tar Heels, and the Jayhawks, and the Wildcats) punch the same ticket year after year.

Next season, as Duke and Arkansas bring in the top two recruiting classes in the country. Arkansas’ is even better after getting 5-star Anthony Black, but annoyingly cannot overtake Duke at No. 1 since the Blue Devils snagged the top three ranked players in the 2022 class.

Still, every Arkansas basketball fan should be excited to see the Blue Devils win, right up until yet another rematch. You can enjoy watching sports for a number of reasons — for aesthetic joy, to follow running storylines, out of sheer familiar inertia, you do you. From where I sit, every time I watch a game, I’m mostly hoping to experience something novel, to feel a new feeling. After a certain number of years watching sports, it becomes part of the fun to root for other people to experience a new feeling. Watching Duke win, though, is an old feeling, especially for the Duke fan.

Watching Duke lose, though? Somehow it always feels new. And if it’s your team doing the winning, there’s no better feeling.

Below, see BoAS contributor Jim Harris get into it with Duke alums Seth Davis and Jay Bilas for his Arkansas vs Duke basketball column: