Search
Home Arkansas Basketball What to Expect from Moses Moody in Likely Only Season as a... 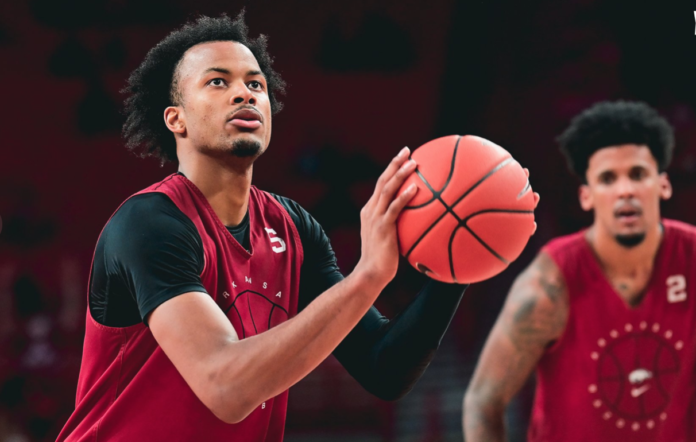 Eric Musselman reeled in one of the best recruiting classes in Razorback history in his first offseason as Arkansas’ head coach. All four of the incoming freshmen were four-star recruits in high school. All were born and/or raised in Arkansas. Among this incoming class awaits a sleeping giant in Moses Moody.

The 6’6 shooting guard is ranked No. 45 in ESPN’s Top 100 Recruiting Class of 2020, as well as No. 10 in his position and No. 1 among Arkansans, ahead of other Hog signees in KK Robinson, Davonte Davis, and Jaylin Williams.

In his last two years of high school, Moody played with a better team than any preceding Razorback in program history. Moody’s alma mater, Monteverde Academy in Florida, is a perennial prep powerhouse than finished No. 1 in the nation in 2019-2020. Even on a star-studded team, including fellow standout Cade Cunningham, Moody was considered the best two-way player on the team thanks to his stellar shooting, defensive tools, and all-around instincts.

Moody is on track to become the Razorbacks’ first one-and-done NBA draft pick. A recent Bleacher Report mock draft projected him as a late lottery pick in the 2021 NBA Draft, landing around the 11th pick. Keep in mind, Jonathan Wasserman wrote this article prior to the NBA draft decisions of Mason Jones and Isaiah Joe. With both star wings out of the picture, Moody’s opportunity and role become larger and even more significant.

Other analysts who believe Moody can be a Top 20 draft pick after his freshman season include Bryan Kalbrosky of USA Today and Kevin Flaherty of 247 Sports.

Moody’s impressive showing in the 2020 Red-White game did nothing to douse these expectations:

Moses Moody looked like a 1st Round pick in the @RazorbackMBB Red-White game. He’s a proven tough shot maker and reportedly measured at 6’6 with a 7’0 wingspan.

Look for him to be one of the best freshman guards in the country and highly scouted for the 2021 NBA Draft. pic.twitter.com/KVugz95c2I

In a recent interview, here is what Arkansas coach Eric Musselman said about Moody, a Little Rock native:

“I think just his ability to be a three-level scorer. I think that we loved his size at 6-6. He’s done an incredible job of adding strength and weight. He’s up to 200 pounds now. He’s an extremely underrated offensive rebounder, I think with his stuff around the rim with his flip shots. We all know he’s a great 3-point shooter. His 3-point percentage at Montverde tells you that. We know he’s a very very good free-throw shooter, his percentages tell you that.”

Moody’s rankings and stats speak for themselves, but it’s always nice when a coach with deep NBA experience weighs in like this.

247 Sports’ Jerry Meyer sees NBA potential in Moody’s game as well. In a recent interview, Meyer called Moody a “solid to very good NBA prospect.” He went on to compare Moody to Jaden Springer, a fellow 2021 guard and Tennessee commit.

“Moody is the better shooter and is a more fluid athlete than Springer. Moody also has an impressive instinctive feel for the game and is effective on the boards. I love the shooting potential of Moody and also get a sense of a lot of still untapped potential.”

Moody has tremendous length and developing strength in a 6’6″ frame, which allows him to play the shooting guard or small forward position. He is an excellent three-point shooter, along with being able to score at all three levels consistently. Shooting is arguably the best part of Moody’s game. His basketball IQ is also off the charts for someone his age, especially someone who rarely plays point guard. These attributes are shared by our NBA player comparison for Moody: Paul George.

Standing at 6’9, George is one of the NBA’s taller shooting guards, though he also spends much of his time at the small forward position. George has a smooth handle offensively that sets him up for space-creating dribble moves, open jump shots, and tough finishes around the rim. In the below highlight reel, you can see Moody demonstrate a wide variety of skills including knocking down long shots, finishing through traffic, and impacting plays defensively. One clip in particular, starting at the 1:19 mark, shows Moody beat his man baseline and finish with an impressively smooth reverse layup around defenders.

This move bears an uncanny resemblance to something Paul George might do on a nightly basis. In fact, he makes an eerily similar move and finish in the very first clip of this 2019-20 highlight reel.

Moody’s wingspan stands out, even among NBA shooting guards. Though he stands at only 6’6, his wingspan measures at 7’0″. For reference, Paul George also has a 7’0 wingspan despite standing at 6’9. The chart below compares Moody’s height and wingspan to those of current NBA stars of roughly the same height:

It is not uncommon for players with an unusually long wingspan to struggle with their shot mechanics — Rajon Rondo and Michael Kidd-Gilchrist are examples of this. George and Moody are a couple of the exceptions to this struggle, and that’s what makes them dangerous.

Not only does their tall frame and long arms allow them to shoot over and finish around defenders, it gives them a natural-born advantage on the defensive side of the ball. While Moody may not be the 1-on-1 lock down defender that Paul George can be, he’s more than capable of being a pest in passing lanes, something that fits perfectly into Musselman’s defensive scheme. Moody doesn’t possess blinding lateral quickness, but he doesn’t necessarily have to. His length and IQ allow him to be a positive factor on the defensive side of the ball, as well as an underrated addition on the boards.

The biggest difference in their game, aside from the three inches George holds on Moody, is overall athleticism. The Paul George of old would put Moody to shame in terms of athleticism. He was throwing down reverse-360-windmill dunks in game before his leg injury. Now however, the comparison between the two swingmen becomes even closer when looking at George’s current ability to move and jump gracefully, but not as high and ferociously as he once could.

Make no mistake, Moody only falls short in leaping when compared to one of the NBA’s best in-game dunkers. Moody is still an electric leaper, especially when compared to other collegiate guards. Just look at the put-back slam Moody pulled out of his bag of tricks during Razorbacks’ summer practice:

How Moody Fits with the Hogs

After Mason Jones declared for the NBA Draft, Moses Moody became the instant favorite to take over his starting role on the wing. Now that Isaiah Joe is also done in Fayetteville, Moody is a lock to start at one of the wing positions. His 6’6″ frame with guard-like skills help him plug into any big, small or medium lineup that Musselman wants to run.

He is a top contender to lead the team in scoring. Transfers like Vance Jackson and JD Notae also have a shot at top scorer, but don’t be surprised if the young guard surpasses them all in his first season.

Moody showed off his thrilling potential in the Hogs’ COVID-19 rendition of the red/white game on November 12. In this fast-paced, high-scoring exhibition, Moody nailed a midrange pull-up jumper to score first. He scored the game’s first six points while hitting all three of his attempts, a great sign of what’s to come for the Hogs’ top recruit.

Moody finished the game with 21 points (on 50% shooting), 6 rebounds, and 4 assists. While Jaylin Williams and Davonte Davis had shaky moments throughout the game, Moody showed poise, confidence, and the ability to come in and instantly lead a team offensively, all impressive attributes for a freshman.

During a mid-game interview, Musselman praised how well Moody has transitioned into the new offense: “Moses, as far as picking up plays, has done a really good job. We’re going to need him to score, so he has been involved a little bit more in the play calling.”

This team has a grad transfer point guard in Jalen Tate, a returning guard in Desi Sills, and a grad transfer forward capable of running an offense in Vance Jackson, but Musselman has already placed his trust in Moody to help keep the offense on track.

That speaks highly of the trust he has already earned from his coaches.

Contributor and Senior Writer for overtimeheroics.net