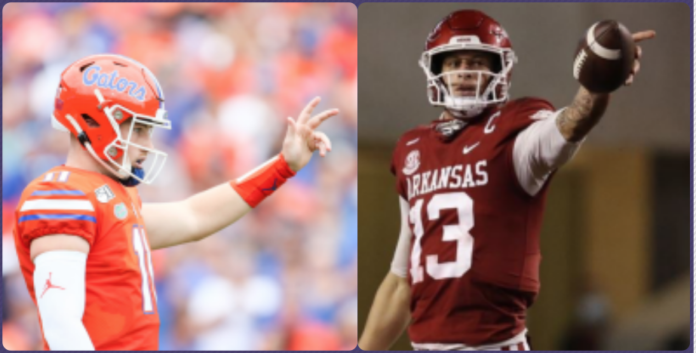 By the time Saturday night’s Florida-Arkansas game in Gainesville rolls around, the storyline of Feleipe Franks’ return to Florida will be worn threadbare.

Franks, of course, is the Razorbacks quarterback who has emerged as the program’s best quarterback leader since Tyler Wilson, ranking in the top 30 nationally in passing efficiency (154.73) and completion percentage (67.2) while already throwing as many touchdown passes (14) in six games as Arkansas had all last season.

Franks will next lead the Hogs, who are 3-3 and should be 4-2, against his former team Florida in what will be the Sam Pittman-era Razorbacks’ toughest test to date.

This week, during the press conferences, he’s saying all the right things, talking about how he still stays in touch with his former Gator teammates and is excited for the opportunity to play against them.

His former head coach, Dan Mullen, is doing his part too. “Feleipe’s a great competitor,” Mullen said in a presser. “He wants to come in here and beat my butt, beat everybody on the team’s butt … that’s what competitors want to do. I’m happy for how it’s working out for him, but I want to beat his butt on Saturday.”

As the programs and coaches want it, the focus is squarely on the present, on this upcoming game. This isn’t the time to delve deep into the particulars of why Franks left his beloved home state in the first place.

Fortunately, earlier this season Franks provided much more detail on this in a 45-minute interview with Bo Mattingly, the former sports talk show host.

He talked about how over the course of a few years he was locked in a quarterback battle primarily with Kyle Trask, now Florida’s star senior quarterback. Until the third game of the 2019 season, he got the lion’s share of playing time as the starter even though Trask was constantly challenging him on everything from the gridiron and the basketball court to the ping-pong table.

By 2019, Emory Jones, a promising young dual-threat quarterback, was also adding heat to the Gators’ quarterback battle. While Jones wasn’t ready to play big minutes then, it was clear he’d be a force to reckon in the following years.

But Franks’ gruesome leg injury early that season changed the narrative more abruptly than he ever imagined.

“I broke my leg,” he said. “You can either go two roads. You can either pout and all this other stuff and make me a worse person or a worse player and all that kind of stuff, or you can be that guy that the team needs still, because Kyle, at the time, didn’t have that many starts.”

“So I wanted to be able to be that guy that Kyle could lean on if he needed to, if he needed help or if Emory or if anybody else needed help, that I had a little bit of experience of playing that I could help them and be able to calm them down before games.”

That injury, as horrible as it was, brought out the best in Franks. He found a new appreciation and love for the game, one that is on full display for Hog fans these days.

It took a few months for Franks to decide to leave the Gators. It’s clear how close he was to his teammates and the families of the coaches even into winter, as this HBO video about his recovery shows:

In the end, though, he saw the writing on the wall.

After taking over for Franks, Trask began developing into the monster he is so far in 2020 as the first quarterback in SEC history to throw four touchdown passes in five consecutive games.

Behind Trask was Jones, then a redshirt freshman, who was hungry for playing time and might have sought a transfer if he had to play third string again in 2020.

Franks likely saw a scenario where a return to Florida would have probably been a “disaster,” as OnlyGators.com’s Adam Silverstein writes.

No only would he have been slow to get up speed during spring practice while rehabilitating, but “Franks would have needed to beat out one quarterback who won over the fan base and another who is clearly the future of the program. Even if Franks did somehow win the job, he would have been on an exceedingly short leash, which could have led to a wasted season in his final year of eligibility.”

Franks, as expected, mostly only talks about relishing competition at the quarterback spot, but it’s also clear he was ready to be the unquestioned leader of a program and end his college career with a bang.

As Mullen said this week, ‘the whole thing came down to, ‘I want to make sure I’m on the field playing next year.'”

Franks told Mattingly his decision to leave came to down to not wanting to duke it out with Trask and Jones again. He said he asked himself: “‘Do I want to stay here and do the whole competition thing again?’ All those kinds of stuff. Not necessarily the competition part of it, but just the daily life kind of stuff… It was me just self reflecting and [coming] to a mutual agreement that maybe it is time for me to go this way or this way. I just kind of looked at my options and Arkansas was a really good option for me, so I chose it.”

Arkansas should thank its lucky stars.

The Hogs’ ability to make half-time adjustments is out of this world right now “And, as sports talk show host Josh Bertaccini says,”it’s such a refreshing contrast to the kind of buffoonery, the kind of shenanigans, that we saw under Clown Coach the last few years — he who shall not be mentioned.”

“There’s no way I could see Arkansas winning a game like it did against Tennessee on Saturday night… the last two years, they would have imploded in the third quarter. There would have been no scrap, no fight – they wouldn’t have adjusted and they would have lost.”

With Franks under center, the Hogs won’t lack in the scrap or fight department. Even if Florida beats Arkansas on Saturday, Hog fans should still be appreciative of Kyle Trask for being the primary reason Franks came to them.

Below is the entire Feleipe Franks interview podcast, where he also discusses his parents’ divorce, idolizing Jameis Winston growing up and how he almost played for the Boston Red Sox:

For the latest on Arkansas-Florida, see this: