Search
Home Arkansas Football What Can We Expect From Alex Collins in the NFL? 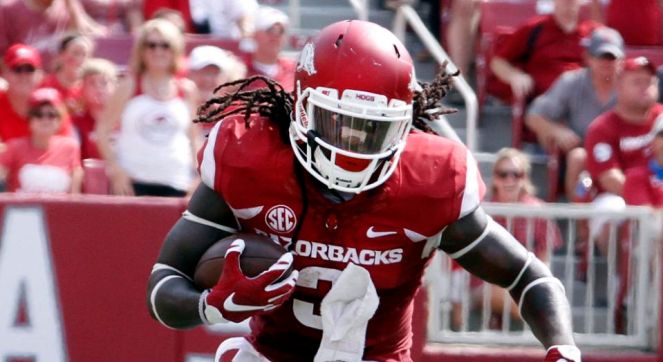 As many expected, Alex Collins has declared himself eligible for the 2016 NFL Draft and the running back will not be returning to the Arkansas Razorbacks next season. Collins is a top talent and plenty of scouts are suggesting that he may even be taken in second or third round – potentially just after Heisman Trophy winner Derrick Henry.

In 2015, Collins rushed for an stellar 1,577 yards which included a 185 yard game against Kansas State in the Liberty Bowl on January 2nd. During the year, he also scored 20 touchdowns – which is a school-record. In fact, Collins broke a number of Razorbacks records during his time in Arkansas and his exceptional year saw him become the second all-time career leading rusher for the school.

As of early February, it’s hard to see Collins slipping out of the second round – he’s simply too good to drop. There are plenty of decent NFL franchises who need a solid running back and Collins could be the man for them. In the build-up to April’s draft, you can keep up with all of the latest news and information via Coral’s website.

Ultimately, Collins’ main appeal is his ability to hit gaps in the defensive line. According to various scout reports, Collins is expected a run a 4.5 in the forty-yard dash, a result that would see him ranked as one of the quickest running backs up for selection. Crucially, he’s fresh too. During his college career, he had less than 700 touches but still ranked up an impressive yardage figure – which will appeal to many of the NFL’s top franchises.

While 700 touches isn’t necessarily a low figure, he remains relatively fresh due to the all the time he split with co-star Jonathan Williams his first two season. His number of carries rose in his final college season, but not to the extent of the other top tailback prospects. While the likes of Ezekiel Elliott and Derrick Henry had 289 and 395 carries last season, Collins had just 271. Even Devontae Brooker, who tore his meniscus earlier in the campaign, had 268 carries in just ten regular season fixtures. That saved mileage makes him a more attractive prospect at a position where the average NFL lifespan is just over three years.

At 5-foot-11 and 215 pounds, Collins is the ideal size for an NFL running back. He’s never going to be a power back like David Johnson or Marshawn Lynch but Collins’ agility and ability to make plays stand him above the rest of the draft. While he wouldn’t suit a ‘ground and pound’ franchise such as the New York Jets, he would fit perfectly into a franchise with an aggressive offensive co-ordinator, especially if he could walk straight into a starting role.

While Collins will have little say in his final location, new customers at Coral have plenty of options for betting on the NFL – including free bets and price boosts. After that, they can offer you great odds on both college football and the NFL but also breaking news in the sporting world. Collins has been linked with both the Washington Redskins and Detroit Lions and it wouldn’t be a huge surprise to see either franchise move for him early in the draft.

Comparably, Collins boasts many of the same traits as legendary Dallas Cowboys running back Emmitt Smith. Smith is one of the greatest backs in NFL history and is the only running back to win the Super Bowl, MVP award, NFL rushing crown and Super Bowl MVP in the same season – a phenomenal achievement. While it would be foolish to suggest Collins could emulate this performance, he is certainly a similar mould and could shine on the big stage.

Furthermore, both Collins and Smith both to an SEC school – which has only helped fuel comparisons between the two players. If Collins manages to achieve even half of Smith’s accomplishments, he will be on for a brilliant career and could lead his franchise to Super Bowl victory in the future.

However, who knows what to expect in the draft? It’s almost impossible to predict how things are going to pan out – especially if there are trades at the top of the order. If nothing else, one thing’s for sure: Alex Collins is a real talent and one of the 32 NFL franchises are going to get an incredible deal if he slips out of the top couple of rounds.