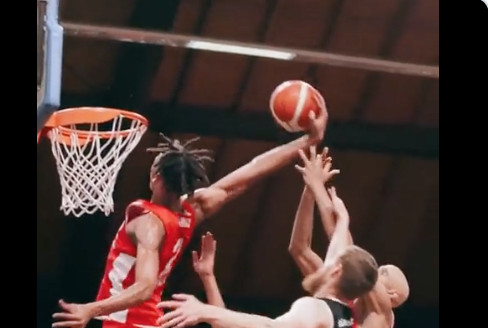 The Arkansas basketball team wrapped up its foreign tour with its fourth and final game in Europe on Monday. Read our recap below, in reverse chronological updates, and make sure check out video of the filthy putback dunk by Trevon Brazile.

No doubt, it’s a harbinger of incredible things to come from this supremely athletic squad.

The Bakken Bears are the best team in the top professional basketball league in Denmark, having won the most championships through the years. One of their players is Skyler Bowlin, a Paragould native who went to Greene County Tech and has played for multiple teams overseas since wrapping up his collegiate career at Missouri Southern State in 2011.

The Razorbacks are starting a trio of freshmen – Anthony Black, Nick Smith Jr. and Barry Dunning Jr. – as well as Kamani Johnson and Trevon Brazile.

Nick Smith Jr. started the scoring with a 3-pointer on the first possession and nearly went back-to-back, but his second attempt rimmed out.

It took about a minute and a half before Bakken got on the board with a pair of free throws.

A nice feed by Anthony Black on a sideline out of bounds play led to a bucket for Trevon Brazile.

The Razorbacks’ defense has made things really difficult on the Bears. The latest stop led to a run out and layup through contact by Brazile, who completed the 3-point play with a free throw.

Another turnover by Bakken led to a fast break dunk by Black and prompted a timeout with the Hogs up 10-2.

Brazile made a nice reverse layup off a really good feed by Anthony Black. The next trip down, he scored on a lob. He’s got nine of Arkansas’ first 14 points.

Kamani Johnson used his physicality to score down low and push the lead to 16-3. Defensively, Arkansas has forced six turnovers in the first five minutes of the game. The Bears are also still looking for their first field goal.

Bakken’s offense has consisted of chunking up deep 3s, none of which have fallen. It looked like it might have a feed down low on an in-bounds play, but Davonte Davis immediately stole it from him.

Things have slowed down offensively for the Razorbacks, too. Several shots haven’t fallen, even after a handful of offensive rebounds. A steal be Davis led to a quick layup that ended the drought.

Bakken finally scored its first field goal on a fast break layup following a make on the other end. It came in the closing seconds of the first quarter.

Brazile jumped in front of a pass on the first possession of the second quarter and threw down a dunk on the other end. He’s up to 13 points.

Wow. Brazile just grabbed a rebound and threw it down with quite a bit of force for one of the more impressive dunks of the trip, all in one motion. A little bit later, Brazile knocked down a long 2.

Smith comes away with a steal and goes coast-to-coast for an easy dunk.

Ricky Council IV scores on a tough drive, pulling up in the middle of the paint. Barry Dunning Jr. knocked down a corner3-pointer a couple of possessions later.

On the next possession, Council went all the way to the hoop and threw down an easy dunk, prompting a timeout.

Brazile leads the way with 17 points. He also has three steals.

Smith started the game with a 3, but his shot has been off since then. He just missed a jumper that makes him 2 of 7 from the floor.

The shots aren’t falling for Arkansas as a team, either. But Council had another good drive to the rim and drew a foul, getting to the free throw line where he went 2 of 2. That ended a scoring drought of a couple of minutes.

Bakken has turned up the defensive pressure and it’s led to a couple of turnovers. The first led to a free throw, but the second immediately resulted in a three. That pulls the Bears within single digits for the first time in a while.

After three straight turnovers, Davis made a really nice pass to Brazile for an easy layup. He’s not 9 of 9 from the floor. On the next possession, Davis got a tough bucket off the glass just before the halftime buzzer.

Brazile leads all scorers with 19 points on 9 of 9 shooting, plus he has three rebounds and four steals. The Razorbacks have turned it over 14 times, but have also forced 18 turnovers.

After shooting 1 of 13 in the first quarter, Bakken went 8 of 16 from the floor in the second quarter.

The second half starts with a turnover by Black that led to a bucket on the other end that once again cut the Razorbacks’ lead to single digits.

Bakken had numerous chances to cut even more into the deficit, but none of its shots fell. Arkansas scored its first points of the half after an offensive rebound by Black, who then fed Brazile down low for an open dunk.

Davis goes coast-to-coast for a layup and then on the next trip, quickly feeds Makhel Mitchell, who finished through contact for an and-one. He missed the free throw, though.

Davis is taking over, as he hits a mid-range shot in the paint to push the lead to 22. But he turned it over on the next possession.

A lob from Council to Brazile results in an alley-oop dunk. Another dunk by Brazile gives him 25 points. His only miss today has been a 3-point attempt from the top of the key.

Kamani Johnson stole the ball from a player who grabbed a defensive board and then dunked it home.

Davis was called for an offensive foul late in the quarter and Bakken turned it into a corner 3 at the buzzer to pull within 12, according to the broadcast. However, live stats has it as a nine-point game, 55-46.

Brazile adds to his performance with a 3 from the wing. That gives him 28 points for the game.

Kamani Johnson just got two offensive rebounds on one possession. On the second one, he took it to the rim himself and finished. On the next possession, Black found Johnson cutting the basket for a much easier dunk.

After grabbing a rebound, Council took it coast-to-coast and looked like he’d have a highlight dunk, but he missed it.

Before a base line drive and thunderous dunk, Brazile was called for a travel.

Several of his drives ended with misses today, but Black finally got one to fall late in the fourth quarter.

Council and Davis get layups on back-to-back possessions, giving them each 10 points.

The FloSports broadcast had the final score 73-59, but the live stats provided by the facility have it 70-59.

Brazile finished with 28 points on 13 of 15 shooting, 9 rebounds, 4 steals and 2 assists. The only other Razorbacks in double figures were Council and Davis with 10 apiece. Kamani Johnson grabbed nine boards, too.

Arkansas wasted no time getting started, jumping out to a 10-0 lead and scoring 35 points while shooting a scorching 16 of 19 from the floor in the first quarter.

Eric Musselman used each of the 13 scholarship players, but freshmen Anthony Black, Joseph Pinion and Barry Dunning Jr., and transfers Ricky Council IV and Trevon Brazile were in the starting lineup. Heralded freshman Nick Smith Jr. came off the bench because he missed some practice time with a finger injury.

However, the injury didn’t seem to slow down Smith, who led the way with 17 points. Kamani Johnson and Brazile finished with 12 points apiece, with Brazile going a perfect 5 of 5 from the floor and Johnson going 5 of 6. Council (11 points) and Dunning (10 points) were the other Razorbacks in double figures.

Even though it was an exhibition game, Musselman was in midseason form as he received a technical late in the second quarter. “What I said was lost in translation,” Musselman joked on Twitter. “They heard how I said something, not what I said.”

Click here for an unofficial box score, highlights from the game and postgame press conferences with Musselman, Smith and Brazile.

This was a much different game than Arkansas’ blowout win two days earlier. The Razorbacks turned it over on three of their first four possessions and quickly fell into a double-digit deficit.

It wasn’t until during the second quarter that Arkansas finally took the lead and then Catalan Elite hung around the rest of the day, largely thanks to 23 turnovers by the Razorbacks.

However, the veteran leadership and play of Kamani Johnson and Davonte Davis carried them to a victory. Johnson finished with a double-double and was particularly active on the offensive glass, with nine of his team-high 12 rebounds coming on that end of the floor. Davis scored 17 points on an efficient 7-of-9 shooting. Freshman phenom Nick Smith Jr. also had 17 points for a second straight game, but once again struggled with turnovers, especially early.

Click here for a box score, highlights from the game and postgame press conferences with Musselman and Johnson.

(READ NEXT: Key Takeaways from Arkansas’ Two Wins in Spain)

For the third straight game, Arkansas played a different game than the previous two. The Razorbacks never trailed, like they did Thursday, but Orange1 hung close for about a half. It was just an 11-point game through two quarters, so it wasn’t a complete blowout like Tuesday.

A dominant third quarter in which Arkansas held Orange1 to only nine points and outscored them by 15 was when it separated for a comfortable victory. The Razorbacks scored about one-third of their points – 27, to be exact – on fast break opportunities.

For a third straight game, Nick Smith Jr. led all Arkansas scorers with 20 points. He was the only player in double figures, but Anthony Black, Ricky Council IV and Trevon Brazile had nine points apiece. Kamani Johnson once again led the way on the boards, grabbing eight rebounds.

Click here for a box score, highlights from the game and postgame press conferences with Musselman, Dunning and Black.

More coverage of Arkansas basketball on its foreign tour from BoAS…