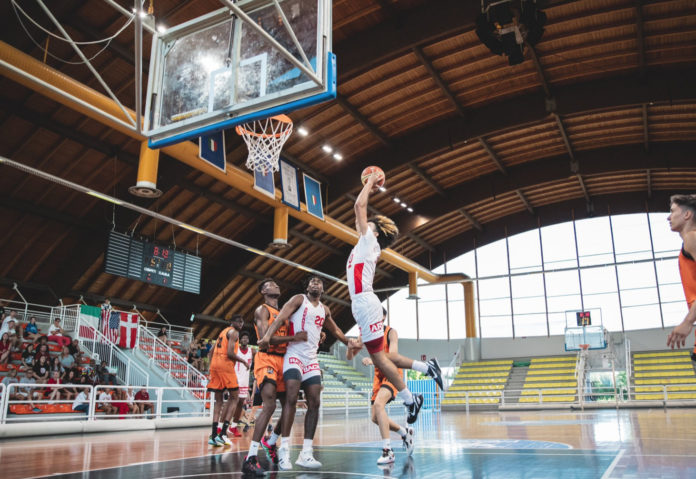 The Arkansas basketball team is back in action Saturday afternoon, this time in Italy. The Razorbacks are set to take on Orange1 Basket Bassano in Como, Italy, for the third game of their foreign tour.

Follow along below for live updates throughout the game – as long as FloSports doesn’t crash – as well as stats whenever they are provided.

For the third game on this European tour, Eric Musselman is going with a different starting lineup. Freshman Derrian Ford and senior transfer Makhi Mitchell make their first appearances in the starting lineup, along with senior Kamani Johsnon. Freshmen Nick Smith Jr. and Anthony Black each make their second starts of the trip.

Anthony Black gets things started with a corner three on the first possession, then their defense forces a turnover at the other end. Arkansas turns it over, but immediately gets it back and Nick Smith Jr. scores in transition.

Another forced turnover allows Anthony Black to get an easy dunk. Derrian Ford gets on the board via a goaltend from Orange Bassano.

Hogs have forced 3 turnovers so far. Kamani Johnson hits both free throws after being fouled, which is a great sign for this team going forward. Nick Smith Jr. is picking up right where he left off in game 2, with a beautiful stepback jumper.

The defense looks much more crisp and rotations are improved, but Orange Bassano isn’t afraid to attack the basket. They’re getting tough inside shots to fall. Devo Davis attacks to get to the basket for an easy two.

Both teams being very physical inside and attacking the basket every chance they get. It looks like the rim on Arkansas’ side of the court is slightly bent, which would be no surprise. Walsh misses a tough layup but Trevon Brazile is there for the putback. Orange Bassano gets fouled on a three-pointer and hits all three free throws.

Makhel Mitchell gets a huge offensive board and putback. Then, on the other end Mitchell has a great shot contest. Trevon Brazile almost rips the rim off the backboard after a steal, but missed the dunk because of a foul. Brazile goes 1-2 at the line.

Both teams starting to get sloppy on the offensive end. I really think the rim at Arkansas’ end of the court is affecting some of these shots. It’s obviously bent.

Arkansas allows an open three to start the 2nd. Makhel Mitchell answers with a tough finish inside to answer. Barry Dunning with a rejection, may have been some contact but no foul called surprisingly.

Devo Davis and Anthony Black hound the Orange Bassano guards leading to a steal and Davis dunk in transition.

Orange1 switches to a 2-3 zone and Nick Smith Jr. attacks the middle of it and finishes with a silky smooth floater.

Off an Orange1 missed shot, Arkansas gets out in transition and throws down a thunderous dunk. Immediately at the other end Black closes out and swats a three-point attempt. Arkansas’ defense is looking really strong early in the second.

Devo Davis finds Anthony Black on a backdoor cut, who throws down the alley-oop.

Ricky Council with a tough finish inside, then Nick Smith Jr. gets a steal on the other end. The bent rim strikes again as Nick Smith Jr. has his layup roll off, but Kamani Johnson is there for the putback.

The Arkansas defense misses a rotation on the defensive end and Orange Bassano is able to hit a wide open corner three. Coach Musselman is not happy on the sidelines.

Ricky Council gets fouled and misses both free throws after the bent rim causes them to roll out, but Kamani Johnson is able to get the offensive rebound and score it. Johnson has been phenomenal so far.

Coach Musselman was upset with amount of fouls his team committed in the first two games, but he should be happy with his team’s performance in that regard after this game. They’ve only committed eight compared to Orange Bassano’s eleven in the first game.

Both Mitchell twins have missed a couple of easy looks around the bent rim today. Very Connor Vanover-esque, but you can’t really blame them when the rim is at a 45-degree angle.

Trevon Brazile has been a real bright spot on both ends in these European games. Has a beautiful finish inside through contact.

Arkansas has had so many easy chances close to the rim, but hasn’t finished a lot of them. Nick Smith Jr. shows off his speed, blowing by his defender to get an easy layup. He’s up to 10 points already.

The guard play has been really good today, but Arkansas just can’t finish around the rim. The good news is they’re not shy about attacking and can get to the rim at will, the finishing isn’t quite there yet.

Brazile is still showing out on both ends. A tough finish in traffic and then good contests at the other end. It’s going to be hard to replace Jaylin Williams, but Brazile is showing he’s up to the task.

One of the key takeaways from the first game was how active and disrupting the Arkansas defense was. They’re back to that level of defense in this second half, deflecting passes and getting stops leading to easy looks in transition.

Barry Dunning Jr. with back-to-back timely plays, finishing a layup off the beautiful find from Council and then throwing down a monster slam off the Jordan Walsh feed.

Arkansas breaks out a full-court press out of the timeout, leading to a Devo Davis steal and layup.

Jordan Walsh is looking a little bit more comfortable today than in the first two games, even if his shots aren’t all falling. Council drives and finds Walsh who hits a beautiful Kevin Durant-like fadeaway from the high post for his first make of the game.

The active defense leads to more offense, this time Ricky Council finishes at the rim.

Lawson Blake and Cade Arbogast are getting a taste of action here late in the third.

Arkansas has struggled from behind the arc today, only making two threes so far. Barry Dunning Jr. finds a cutting Nick Smith Jr. for a layup. Nick Smith Jr. is up to 17 points today.

Outside shooting hasn’t been there today, but the inside game has been really solid. Tough shots started to fall and the game was able to open up a little bit.

Joseph Pinion enters the game and is noticeably active on defense, as Orange Bassano is trying to attack at him. The Arkansas defense allows back-to-back threes for Orange Bassano.

Nick Smith Jr. hits another three. He’s been the only consistent threat from beyond the arc for the Hogs in these first three games. Arkansas has only managed to score five points so far in the fourth.

Arkansas has been outscored 11-5 in the fourth quarter. The defensive intensity has noticeably dipped in the last quarter, and you can tell Coach Musselman is not thrilled about it from the sidelines.

There is a night-and-day difference in the third and fourth quarter on both ends for Arkansas. The defense has allowed a lot more open looks and isn’t forcing any turnovers.

Barry Dunning Jr. is still attacking the rim and gets fouled. Only makes 1 of 2 from the line.

Barry Dunning and Ricky Council each finish with a pair of tough layups. The offense was hard to come by in the final frame as Arkansas was outscored 15-10 by Orange Bassano.

Arkansas played much better in this game than they did on Thursday . The competition level aside, the team looked like it had corrected a lot of the issues and mistakes that were made Game 2.

Nick Smith Jr. was the only Hog who scored in double-figures, finishing with 20 points (on 6-10 shooting), 3 assists and 4 steals.

The Hogs finished with 18 steals as a team and forced 26 turnovers total.

They’ll have one more game on Monday to finish out their European tour.

Miss the first two games in Spain? Here are the key takeaways you should know from the two wins.

How to Watch Arkansas Basketball in Europe – Game 3

FloSports is a subscription streaming service that usually costs $30/month, but click here for instructions on how to get it for $12.50.

Arkansas wasted no time getting started, jumping out to a 10-0 lead and scoring 35 points while shooting a scorching 16 of 19 from the floor in the first quarter.

Eric Musselman used each of the 13 scholarship players, but freshmen Anthony Black, Joseph Pinion and Barry Dunning Jr., and transfers Ricky Council IV and Trevon Brazile were in the starting lineup. Heralded freshman Nick Smith Jr. came off the bench because he missed some practice time with a finger injury.

However, the injury didn’t seem to slow down Smith, who led the way with 17 points. Kamani Johnson and Brazile finished with 12 points apiece, with Brazile going a perfect 5 of 5 from the floor and Johnson going 5 of 6. Council (11 points) and Dunning (10 points) were the other Razorbacks in double figures.

Even though it was an exhibition game, Musselman was in midseason form as he received a technical late in the second quarter. “What I said was lost in translation,” Musselman joked on Twitter. “They heard how I said something, not what I said.”

Click here for an unofficial box score, highlights from the game and postgame press conferences with Musselman, Smith and Brazile.

This was a much different game than Arkansas’ blowout win two days earlier. The Razorbacks turned it over on three of their first four possessions and quickly fell into a double-digit deficit.

It wasn’t until during the second quarter that Arkansas finally took the lead and then Catalan Elite hung around the rest of the day, largely thanks to 23 turnovers by the Razorbacks.

However, the veteran leadership and play of Kamani Johnson and Davonte Davis carried them to a victory. Johnson finished with a double-double and was particularly active on the offensive glass, with nine of his team-high 12 rebounds coming on that end of the floor. Davis scored 17 points on an efficient 7-of-9 shooting. Freshman phenom Nick Smith Jr. also had 17 points for a second straight game, but once again struggled with turnovers, especially early.

Click here for a box score, highlights from the game and postgame press conferences with Musselman and Johnson.

More coverage of Arkansas basketball in Europe from BoAS…